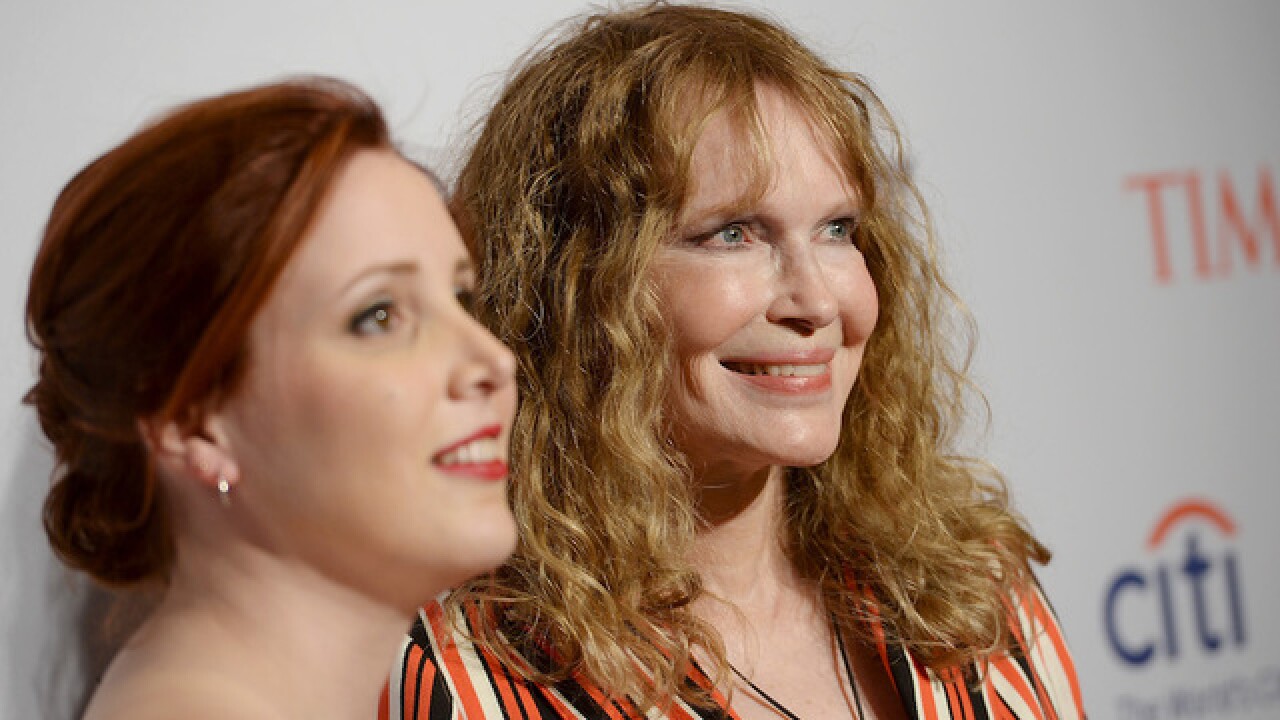 Dylan Farrow broke down in tears in her first televised interview and said she wishes her father, director Woody Allen, had been charged with assaulting her.

"He's lying and he's been lying for so long," she said after watching a clip of a 1992 "60 Minutes" interview in which Allen denied abusing her. "It is difficult for me to see him and to hear his voice."

Farrow, 32, sat down with Gayle King for an interview that aired on "CBS This Morning" on Thursday and provided graphic details about how Allen allegedly sexually assaulted her when she was seven years old.

"I want to show my face and tell my story," she said. "I want to speak out, literally."

Farrow has talked about the sexual assault before, in an interview with Vanity Fair in 2013 and in an open letter published in the New York Times in 2014, but her comments on Thursday mark the first time she detailed the assault in a televised interview.

Allen has consistently denied the allegation and was not charged. Investigators concluded at the time that Farrow had not been abused , according to The New York Times, which covered the custody proceedings after Allen filed for custody of his three children with Mia Farrow in 1992.

Farrow said she loved and respected her father, and considered him her "hero" before he molested her in her mother Mia Farrow's Connecticut home on August 4, 1992.

She told King that Allen took her to an attic crawl space while her mother was out shopping, instructed her to lay on her stomach and play with her brother's toy train while he sat behind her in the doorway and assaulted her.

At the time Allen, insisted that his daughter had been coached to lie by her mother, who discovered months earlier that Allen was having an affair with her adopted daughter, Soon- Yi Previn.

Allen and Previn have been married since 1997.

On Thursday, Allen released a statement through a representative saying, "When this claim was first made more than 25 years ago, it was thoroughly investigated by both the Child Sexual Abuse Clinic of the Yale-New Haven Hospital and New York State Child Welfare."

"They both did so for many months and independently concluded that no molestation had ever taken place," the statement continued. "Instead, they found it likely a vulnerable child had been coached to tell the story by her angry mother during a contentious breakup."

Allen also mentioned Farrow's older brother Moses, who has accused his mother of brainwashing him as a child. In 2014, he said Mia Farrow "drummed it into me to hate my father for tearing apart the family and sexually molesting my sister."

"But even though the Farrow family is cynically using the opportunity afforded by the Time's Up movement to repeat this discredited allegation, that doesn't make it any more true today than it was in the past," Allen's statement reads. "I never molested my daughter -- as all investigations concluded a quarter of a century ago."

Farrow's brother Ronan helped kick off the #MeToo and #TimesUp movements after he reported on allegations of sexual misconduct by powerful producer Harvey Weinstein over decades. Ronan Farrow defended his sister in a guest column for The Hollywood Reporter .

"I believe my sister," Ronan wrote in the 2016 column. "This was always true as a brother who trusted her, and, even at 5 years old, was troubled by our father's strange behavior around her: climbing into her bed in the middle of the night, forcing her to suck his thumb — behavior that had prompted him to enter into therapy focused on his inappropriate conduct with children prior to the allegations."

In December, Dylan Farrow asked in an opinion piece published by the Los Angeles Times why Allen has not suffered the same fate as other powerful men in Hollywood accused of sexual misconduct.

The now married Farrow, who is a mother of a 16-month-old daughter, said it has been "momentous" for her to witness so many people come forward with their own stories.

"With so much silence being broken by so many brave people against so many high profile people, I felt it was important to add my story to theirs because it's something I've struggled with for a long time," Farrow told King in Thursday's interview.