Do kids need a different kind of sunscreen? 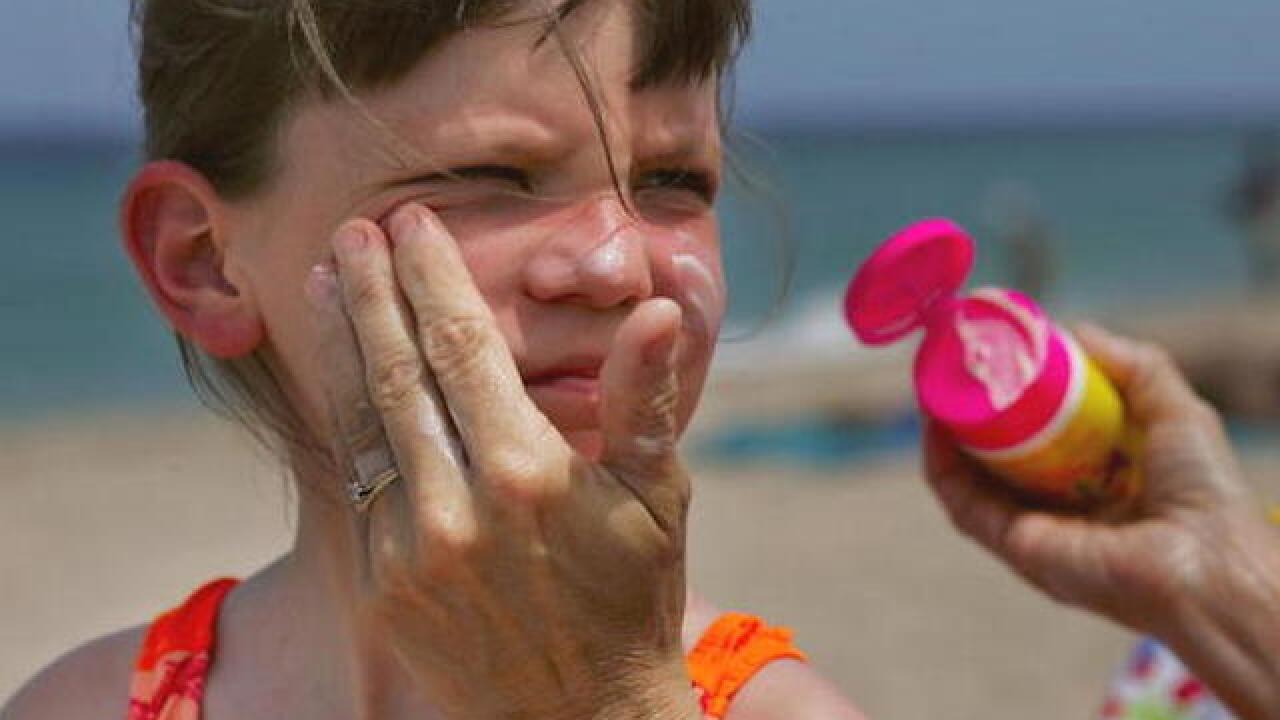 Image copyright 2018 Getty Images. All rights reserved. This material may not be published, broadcast, rewritten, or redistributed.
Joe Raedle
<p>FORT LAUDERDALE, FL - JUNE 20: Sharon Doyle puts sunscreen on the face of 9-year-old Savannah Stidham as they visit the beach June 20, 2006 in Fort Lauderdale, Florida. Recent studies have shown that the best way to protect against melanoma from the sun is to use a sunscreen that includes zinc oxide, titanium dioxide or avobenzone. People exposed to the sun should look for water-resistant sunscreen with a Sun Protection Factor (SPF) of 30 or higher. (Photo by Joe Raedle/Getty Images)</p>

A busy sunscreen aisle can leave parents confused about which lotions, sticks or sprays to buy for their kids.

Complicating matters are varying recommendations for the average consumer: The US Food and Drug Administration recommends buying products labeled with at least SPF 15, and the American Academy of Dermatology puts the bar at SPF 30.

Several consumer guides provide product rankings using their own criteria, including Consumer Reports and the Environmental Working Group, whose guide to roughly 650 products was released Tuesday.

"Sunburn during early life, especially childhood, is very dangerous for all skin cancers but especially malignant melanoma," said Dr. Eleni Linos, an associate professor of dermatology at the University of California, San Francisco.

These sunburns "are actually much more dangerous than sunburns later on," she added. "That's why we need to really protect our kids."

Regardless of whether a sunscreen is marketed to kids or adults, "essentially, the SPF value is what's worth focusing on," Linos said.

Every time you step into the sun, you're hit with ultraviolet rays that "can damage your skin in as little as 15 minutes," according to the US Centers for Disease Control and Prevention. The impact of this damage can range from premature wrinkles to skin cancer.

This is due to two types of UV rays: UVA and UVB. Each has different wavelengths and thus penetrates skin to different depths. The American Academy of Dermatology describes UVB rays as "burning rays" and UVA rays as "aging rays" because of their tendencies to cause sunburns versus wrinkles and age spots, respectively.

Sunscreen, then, provides a shield for these UV rays. The higher the SPF, or sun protection factor, the more of this radiation gets stopped in its tracks.

What's important to know, Linos said, is that SPF refers only to protection from UVB rays, not UVA. In order to protect against both, "you want to make sure that you're choosing a sunscreen that has 'broad spectrum' on it," she said.

Experts say that the differences between SPF numbers are small after a certain point. For example, a sunscreen with SPF 15 may block 93% of UVB rays, versus 97% for SPF 30.

"I don't recommend higher than 50 unless my patient has a disease that's photosensitive, like patients with lupus," Garner said. "That 1% difference to them is meaningful."

Products can also be "water-resistant," which means the SPF on the label holds true even after 40 minutes underwater. If a label says a sunscreen is "very water-resistant," that time period jumps to 80 minutes, assuming no towel drying.

Despite these labels, "no sunscreens are 'waterproof,' " the FDA says. "All sunscreens eventually wash off."

Regardless of which SPF you choose for yourself or your kids, experts recommend applying a broad-spectrum sunscreen a half-hour before going outside and reapplying frequently, which often means every two hours or soon after sweating or playing in the water -- whichever comes first.

The American Academy of Dermatology recommends against using sunscreen on babies younger than 6 months; it's better to keep them in the shade. But when it's called for, "sunscreens containing titanium dioxide or zinc oxide are less likely to irritate a baby's sensitive skin," the organization says.

These products are often referred to as "mineral sunscreens," though products containing other compounds -- such as oxybenzone -- have been deemed safe to use and FDA-approved for kids 6 months and older, according to the academy.

Mineral products generally "don't protect as well," Garner said, and they often lack chemicals that can prolong the effects of the sunscreen on your skin. "The chemistry of creating an effective sunscreen is difficult," she said.

Garner said some of her patients have mistakenly believed they were allergic to sunscreens across the board, when in actuality they were having a reaction to a single ingredient.

"Most of the time, when people have a problem with their sunscreen, it's actually one of the other ingredients -- not the sunscreen itself -- that they're sensitive to," she said.

Some experts also frequently recommend lotions over spray, citing a risk of inhalation and an easier way to gauge whether you've applied the right amount.

"My friends and their children, they love the sprays. They're easier to put on. But if you don't rub them in, you frequently miss areas," said Garner, who recommends that sprays be applied twice over, rubbed in and never aimed near the face.

"With lotions, you know how much you are applying to your skin, and that's important because you want to know that you are putting on an adequate amount to protect your skin," Dawn Holman, a behavioral scientist in CDC's Division of Cancer Prevention and Control, previously told CNN.

Beyond that, there's plenty you can do to shield kids from UV rays: long-sleeved shirts, sunglasses, hats with broad brims and avoiding the harshest hours of sunlight at midday, according to the FDA. Linos' own research suggested that "shade or long sleeves -- physical protection from the sun -- may in fact be more effective than sunscreen alone," she said.

The other main advice Linos gives to patients: Choose something you like to use and are more likely to reapply.

"As long as it has an SPF factor of 30 or above," Linos said, "then I tell patients to just go for a product they like, because that means they'll use it more often."