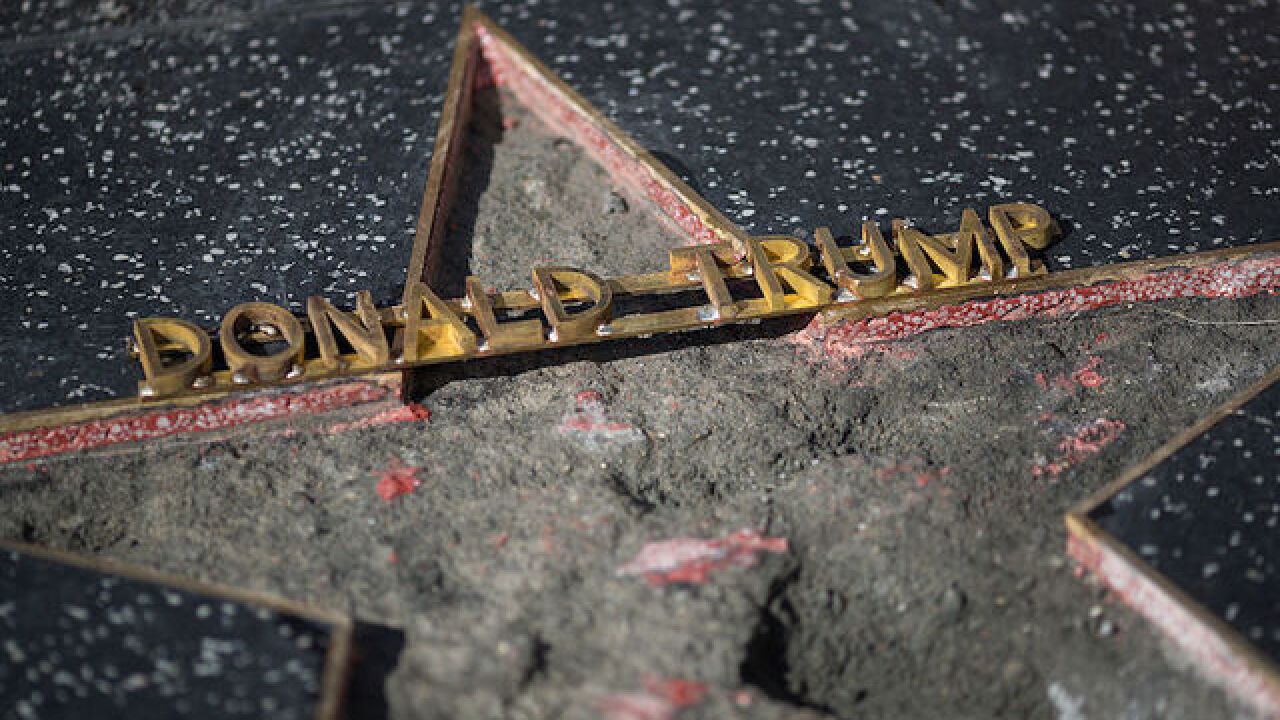 Copyright Getty Images
David McNew
<p>The Hollywood Walk of Fame star of President Donald Trump is repaired after it was vandalized by a protester on October 26, 2016 in Hollywood, California. </p>

On the same day the City of West Hollywood voted to ask for President Donald Trump's Walk of Fame star to be removed, the person who'd most recently vandalized it was charged.

The resolution to request the removal of Trump's star's was unanimously adopted by the West Hollywood City Council but is not legally binding as the city has no jurisdiction over the Hollywood Walk of Fame.

"The West Hollywood City Council did not pass the resolution because Donald Trump is a conservative or a Republican. Earning a star on the Hollywood Walk of Fame is an honor. When one belittles and attacks minorities, immigrants, Muslims, people with disabilities or women -- the honor no longer exists," he told CNN.

Duran said the council had never previously asked for a star to be removed: "Never have we intruded into our neighboring city's business like this. But the circumstances compelled us to make an exception to the rule."

The Hollywood Chamber of Commerce, which does have jurisdiction over the iconic tourist attraction, said Trump's star was safe for the time being.

"Once we receive a communication from the City of West Hollywood, it will be referred to our Executive Committee for consideration at their next meeting. As of now, there are no plans to remove any stars from the Hollywood Walk of Fame," President Leron Gubler said.

"The West Hollywood City Council does not have jurisdiction over the Hollywood Walk of Fame."

Gubler has previously said that once a star has been added it is considered "a part of the historic fabric of the Hollywood Walk of Fame" and no stars have ever been removed.

Trump's star has repeatedly been the target of vandalism and protests since the reality TV star's turn to politics, most recently last month.

Prosecutors said Monday that the suspect in that case, a 24-year-old local resident, would be arraigned next week on a felony count of vandalism in the pickax destruction of Trump's star.

Austin Mikel Clay turned himself in one day after the July 25 incident, according to a statement from the Los Angeles County District Attorney's Office. It was not immediately clear whether he has an attorney.

Patricia Cox, a witness, told CNN affiliate KCAL/KCBS that she saw a man "going to town" on the ground "like it was his business just to be tearing up the ground," she said. "I thought it was work going on over here."

Los Angeles police Officer Ray Brown said Clay did not reveal a motive for the alleged vandalism, and the investigation continues. He was released on $20,000 bail.

In April 2016, a Superman impersonator on Hollywood Boulevard said he had seen visitors make obscene gestures next to the star, deface it with paint and allow a dog to relieve itself on the landmark.

"People often stomp with anger on the star, others kick their heels over the star, and some spit. The last time, someone put a sticker over the star," impersonator Francisco Javier said at the time.

A street artist constructed a tiny wall around Trump's star in July 2016, and that October Los Angeles police arrested a man who they said vandalized the star with a sledgehammer and a pickax.

If convicted as charged, Clay could face a possible maximum sentence of three years in jail, prosecutors said.

To get a star on the sidewalk, Trump or his representatives had to pay $30,000 for the creation and installation of the star in 2007 after the chamber approved his nomination. Anyone can make a nomination.