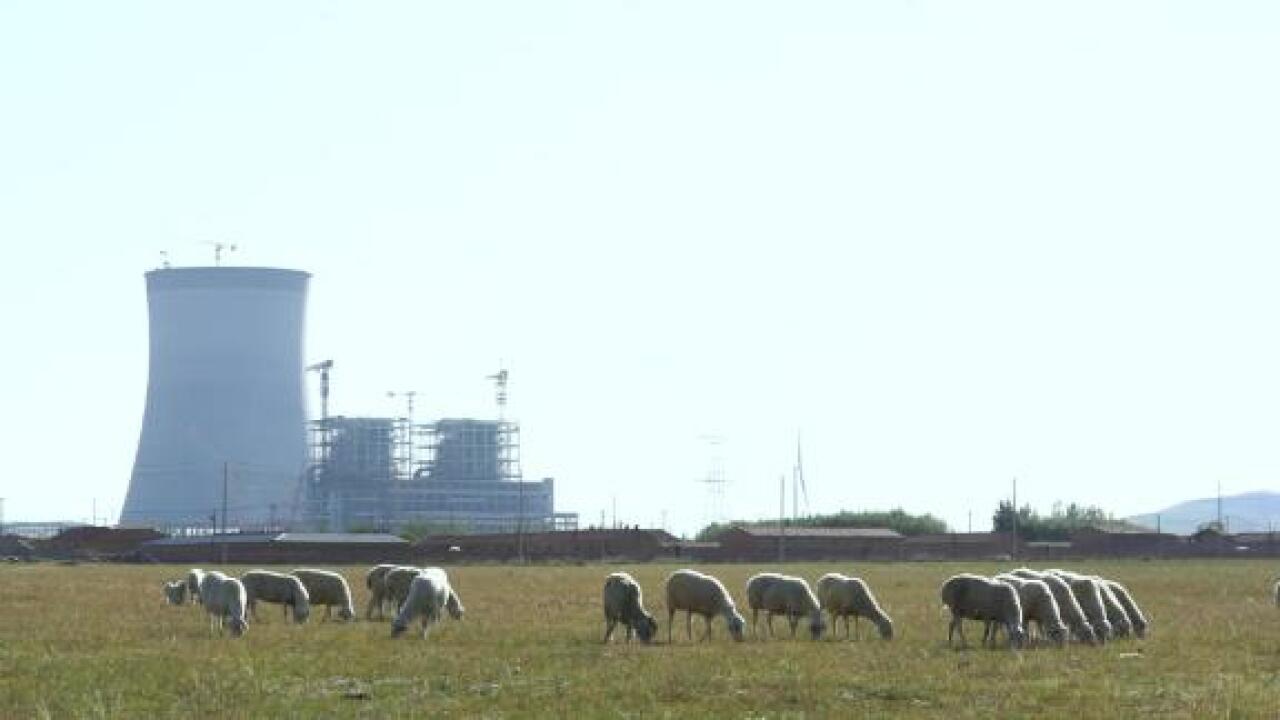 (CNN) -- On the coal-rich plains of Inner Mongolia, thick white smoke curls from the huge chimney of a thermal coal power plant which the Chinese Communist Party had pledged to stop constructing two years ago.

The order came from China's National Energy Administration as part of a government plan to eliminate millions of tons of "overcapacity" caused by a rush of approvals and the construction of "illegal" power plants. It is also part of President Xi Jinping's pledge to reduce the country's reliance on coal and reach peak carbon emissions by 2030.

But even as China reiterated its commitment to reducing emissions last week in New York, earlier this month at least three large, new coal-fired power stations appeared to be either operating or under construction in Inner Mongolia in northern China -- including Mengneng Xilin.

On the outskirts of the Inner Mongolian city of Xilinhot, smoke could seen swirling from a number of power plants, while others appeared to be busily under construction.

Greenpeace senior global policy adviser Li Shuo said that there had been pushback from provinces and business leaders after the government's 2017 suspension, leading to a number of new coal plants being quietly approved.

The reasons are economic, Li said. China's economy has been looking increasingly shaky after decades of unprecedented growth, driven by a global slowdown and trade competition with the United States. China's quarterly economic growth slowed to 6.2% at the end of June, the lowest level in three decades.

"This has actually been the norm that we have observed over the past few years. Whenever there is downward pressure on an economic front, there is a tendency or desire from the industry and policymakers to unleash large-scale infrastructure projects," Li said.

"Inner Mongolia is ... really the hotspot of the climate battle in this country."

CNN reached out to both the National Energy Administration and the National Development and Reform Commissions, as well as the owners of the power plants, for comment but has not received a response.

Li Fulong, director of development planning of the National Energy Administration, told journalists at a news conference earlier this month that China is a responsible nation that would keep its climate promises. But he stopped short of saying China would halt ongoing or future plant constructions.

"We have developed clean and efficient coal-fired generating units, that have large capacity, high energy efficiency and low pollution emissions," he said.

China is the world's largest producer and consumer of coal, far outstripping rivals such as the United States, India and Australia. But amid rising concern around greenhouse gases and manmade climate change, China's reliance on fossil fuels has come under increasing domestic and international scrutiny.

President Xi Jinping announced in 2017 that tackling pollution and greenhouse gas emissions would be one of his "three battles," along with ending poverty and excess debt.

Since then, state-run media has made a big show of broadcasting punishments against officials caught violating environmental laws. It has also promoted new advances in renewable energy.

In fact, China is considered by some to be a leading nation in tackling climate change, especially following US President Donald Trump's decision to withdraw from the Paris Climate Change agreement in 2017.

At the United Nations Climate Summit in New York last week, Foreign Minister Wang Yi made a pointed dig at the US, saying that the withdrawal of "certain parties" wouldn't shake the "collective will of the international community."

In 2018, China sourced 59% of its energy from coal and 22% from gas, nuclear power and renewable energy.

By next year, it has pledged to reduce its reliance on coal to 58%, and to continue ramping up its renewable energy to a target of 20% by 2030. In 2017, China accounted for almost half of all investment in renewable energy worldwide.

"I think on one hand, China has already become the largest manufacturer developer and investor when it comes to some of the most advanced renewable technologies," Greenpeace's Li said.

"But on the other hand... China is pumping money into coal, both at home but also overseas."

According to Climate Action Tracker, China's carbon emissions rose an estimated 2.3% in 2018, the second consecutive year of growth after emissions appeared to stall between 2014 and 2016.

Mengmeng Xilin isn't the only coal power plant to have quietly restarted construction or gone into operation since the notice was sent in 2017.

Huaneng North Victory Thermal Power Plant is due to begin operating in October 2019, generating more than 1,000 megawatts of power. Similarly, Xilinhot's Datang Power Plant is expected to finish construction in July, set to provide up to 1320 MW, despite also being on the list of power stations put on hold.

Satellite images from Google Earth show that, after a brief pause in 2017, the construction of all three suspended plants continued. The resumption work has raised questions about the status of dozens of other supposedly suspended heavily-polluting power stations across the country.

Herdsman Li Jianjun, who lives just a few hundred meters away from a giant open cut coal mine, said the huge coal reserves have been a mixed blessing for Inner Mongolia.

"It is certain that people's living standards have improved a lot more than before, but the environment is certainly getting worse and worse day by day, much worse than before," he said.

Analysis by climate change activist group CoalSwarm, released in 2018, found that if China finished construction on all the new planned coal power plants while still operating their older stations, it would make it very difficult for the international community to avoid rapid temperature increases.

"Complying with the Paris agreement requires rapid retirement of the current coal fleet and no additional capacity additions," the analysis said.

Not only is China's funding of coal power stations domestically a problem, but a 2019 report by the Institute for Energy Economics and Financial Analysis found that Chinese companies were helping or promising to finance at least one in four newly-constructed polluting plants globally.

The 2018 report from the Ministry of the Ecology and Environment said China would be developing the "green and efficient development and utilization of coal."

Greenpeace's Li said that he felt there was a "lot of momentum" building in China for more action on climate change, but time was running out.