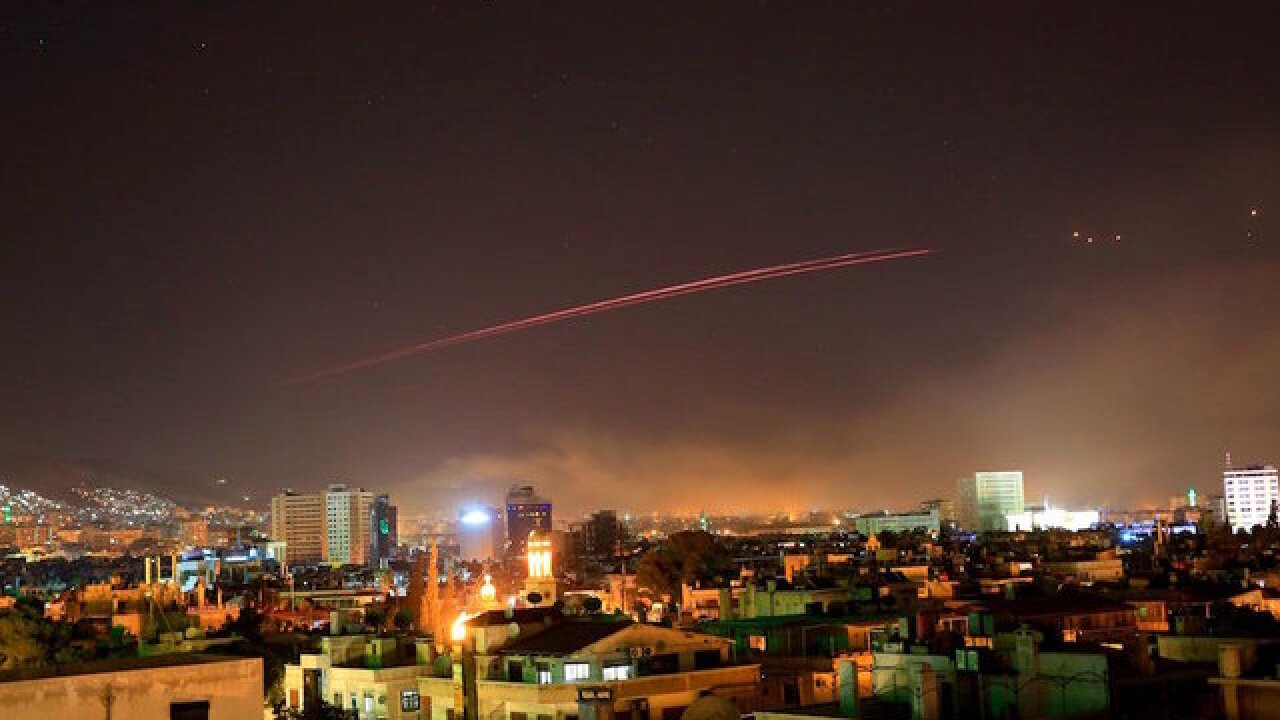 The UK has accused Syria and Russia of preventing independent chemical weapons experts from entering the city of Douma, hit by a suspected gas attack that Western leaders have blamed on the Syrian government.

A fact-finding team from the Organization for the Prohibition of Chemical Weapons (OPCW) arrived in Syria on Saturday, the same day the US, UK and France carried out airstrikes against Syrian government targets in response to the April 7 attack in Douma.

But by Monday, the team had still not been granted safe passage, according to the UK envoy to the OPCW, Peter Wilson. The US expressed concerns that Russia may have tampered with evidence at the site.

The OPCW team is tasked with determining whether banned substances were used in the attack, a charge that both Syria and its most powerful ally, Russia, have vehemently denied.

Syria's Deputy Foreign Minister Fayssal Mikdad said Monday his country was ready to facilitate the OPCW team in any way to carry out its mission, the state-run SANA news agency reported, while Kremlin spokesman Dmitry Peskov did not respond directly to CNN's question on whether Russia had blocked the experts. Peskov said only that Russia was against "groundless" accusations about who was responsible for the attack.

The suspected chemical attack is the latest issue to heighten tensions between Russia and Western powers. More than 100 Russian diplomats were expelled from more than 20 countries in March over the poisoning of a Russian ex-spy on British soil, which the UK and US has blamed on the Russian government. Russia denies the accusations.

"Yet again, Russia is spreading conspiracy theories and misinformation designed to undermine the integrity of the OPCW's fact finding mission," Wilson said in a statement.

"A significant body of information, including intelligence, indicates the Syrian regime is responsible for this latest attack."

The US envoy to the OPCW, Kenneth D. Ward, said he was concerned that Russia may have interfered with the site of the Douma attack.

"We are concerned they may have tampered with it with the intent of thwarting the efforts of the OPCW Fact Finding Mission to conduct an effective investigation. This raises serious questions about the ability of the (team) to do its job," he said in a statement Monday.

Russian Foreign Minister Sergey Lavrov said last week his country had sent experts to the site and found "no trace" of chemical weapons use. On Monday, he told the BBC's Hardtalk show that he guaranteed there had been no Russian tampering.

Around 75 people, including children, were killed in the Douma assault, UK officials have said, while 500 people were treated in the attack's aftermath with symptoms consistent with chemical weapons exposure, the World Health Organization reported, citing its partners on the ground.

The OPCW has recorded more than 390 allegations of chemical weapons use in Syria since its investigation began in 2014, Wilson said.

May, Macron to face questioning

British Prime Minister Theresa May and French President Emmanuel Macron were both due to face their respective legislatures on Monday.

The leaders will be expected to answer for their decision to join the US in launching missiles at suspected chemical weapons sites in Syria, in an attempt to punish President Bashar al-Assad's regime for the alleged chemical attack.

Russian President Vladimir Putin spoke to Iranian President Hassan Rouhani on Sunday, and in a joint statement released by the Kremlin they called the missile strike an "illegal action," that "seriously damages the prospects for a political settlement in Syria."

Putin, the Kremlin added, stressed that if "such actions, carried out in violation of the UN Charter, continue, it will inevitably lead to chaos in international relations."

The UK opposition leader, Jeremy Corbyn of the Labour Party, also questioned the strikes, saying Saturday that he believed the "action was legally questionable," and called on May to publish the UK attorney general's advice that approved the bombings.

As May and Macron face critics at home, their representatives to the United Nations will, with the US, push Monday for a resolution calling for an investigation into the alleged chemical weapons attack.

The renewed push for a UN-backed diplomatic solution follows a volatile emergency meeting of the UN Security Council, called by Moscow on Saturday, in which Russia condemned the strikes as a violation of international law.

Nikki Haley, the US ambassador to the UN, said that new sanctions against Russia would be announced by Treasury Secretary Steven Mnuchin on Monday.

"If you look at what Russia is doing, they continue to be involved with all the wrong actors, whether their involvement in Ukraine, whether you look at how they are supporting Venezuela, whether you look in Syria and their way of propping up Assad and working with Iran, that continues to be a problem," Haley said on Fox News Sunday.

Trump, she said, has "talked to our allies and said they need to step up more. They need to do more. And it shouldn't just be us doing it. I think that's the right approach. But be very clear, if we leave, when we leave, it will be because we know that everything is moving forward."

Despite their unified stance to rout out chemical weapons from Syria, there has been no consistent strategy voiced by the administrations in London, Paris and Washington over the way forward in Syria.

The White House pushed back against comments Macron made during a two-hour interview in which he said he convinced Trump "that it was necessary to stay" in Syria. "Please be assured," Macron said in his interview, "we've convinced him that we had to stay on in the long term."

"The US mission has not changed. The President has been clear that he wants US forces to come home as quickly as possible," said White House Press Secretary Sarah Huckabee Sanders in a statement.