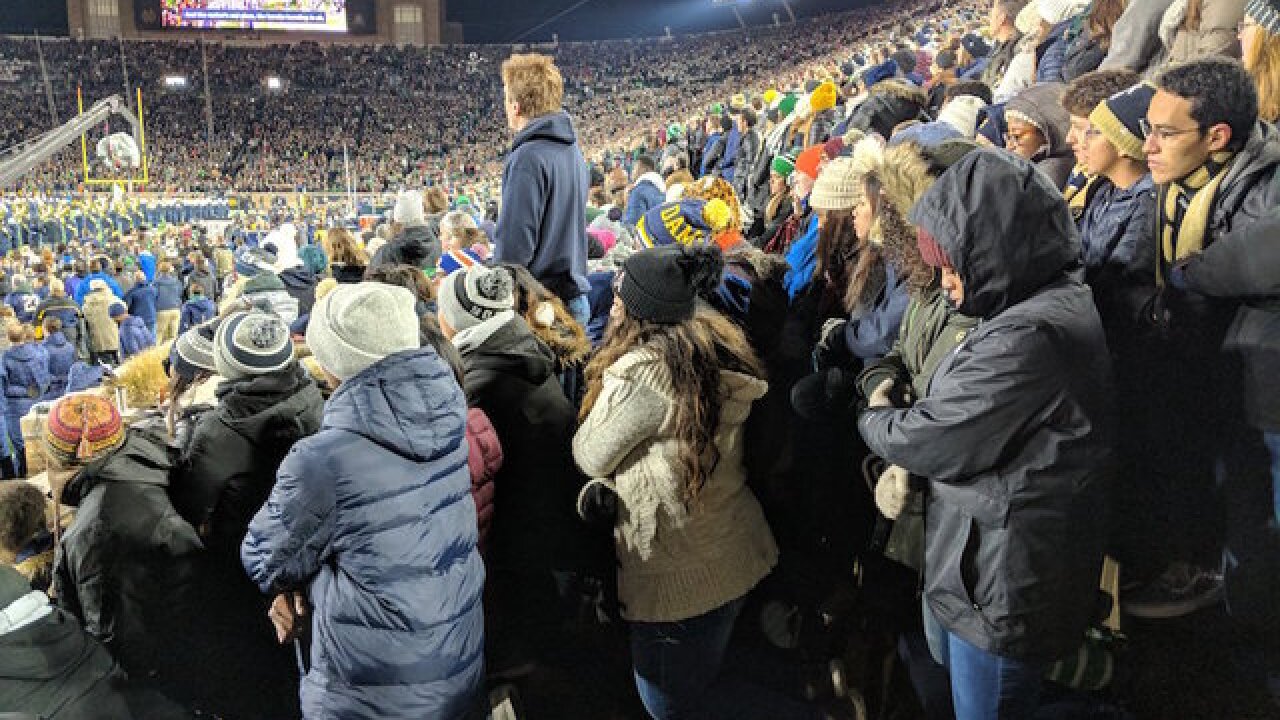 © 2018 Cable News Network, Inc.
Katie Hieatt
<p>Students link arms as part of their demonstration at Notre Dame for those who have suffered social injustice.</p>

More than 100 students knelt on the benches of Notre Dame Stadium while "The Star-Spangled Banner" played during the school's football game against Florida State University on Saturday.

Taking a knee to protest racial injustices began in 2016 when then-San Francisco 49ers quarterback Colin Kaepernick knelt during the national anthem before a preseason NFL game.

Kaepernick's actions were based mostly on political issues, but the students wanted to put a spin on the protest and make it a religious matter as well.

"We wanted to frame this movement around Notre Dame's religion, which is Catholic. Some made it a moment of silence, and others prayed," said Katie Hieatt, one of five protest organizers.

Durrell Jackson, another of the organizers, began protesting earlier in the college football season with a couple of friends. That's when Shawn Wu stepped in and decided this needed to be a bigger movement.

With the help of three other students, they organized the November 10 protest that led 80 of their junior classmates and about 30 students in the senior class to kneel.

"For me personally, this is both a political and religious issue," Jackson said. "Police brutality and racial [and] social injustice against brothers and sisters is not the Christian thing to do."

The students brought back some of the school's history as they knelt in solidarity.

They linked arms in prayer like the Rev. Theodore Hesburgh, who served as the school's president until 1987, and the Rev. Martin Luther King Jr. did in 1964 at a civil rights rally in Chicago, as they sang "We Shall Overcome."

Like Hesburgh and King, the students hope to bring people together to respect one another even if they have different beliefs.

"Rather than being dismissed as 'just a liberal act,' many might reconsider how this movement of justice and reconciliation aligns deeply with shared values (among many) of faith, Notre Dame tradition, and Fr. Hesburgh," the group wrote in its mission statement, inviting their peers to protest with them.

Brian Gatter, one of the other organizers, said their main goal was to let people know that students at Notre Dame are not just concerned with racial injustices, but also with the treatment of people when they share an opinion others don't agree with.

"Our main goal is to start a healthy and peaceful dialogue, rather than to keep this a one-sided conversation," Gatter said. "One of the things we want to stress the most with this movement is that this is not a protest against the military or the flag, this is about how we treat each other as human beings. We don't need to reduce people down in order to make a point. We can have a good dialogue, even if we don't agree with each other."

The University of Notre Dame has not taken any disciplinary action against the students, Gatter said. CNN contacted the school's administration for further comment and is waiting to hear back.