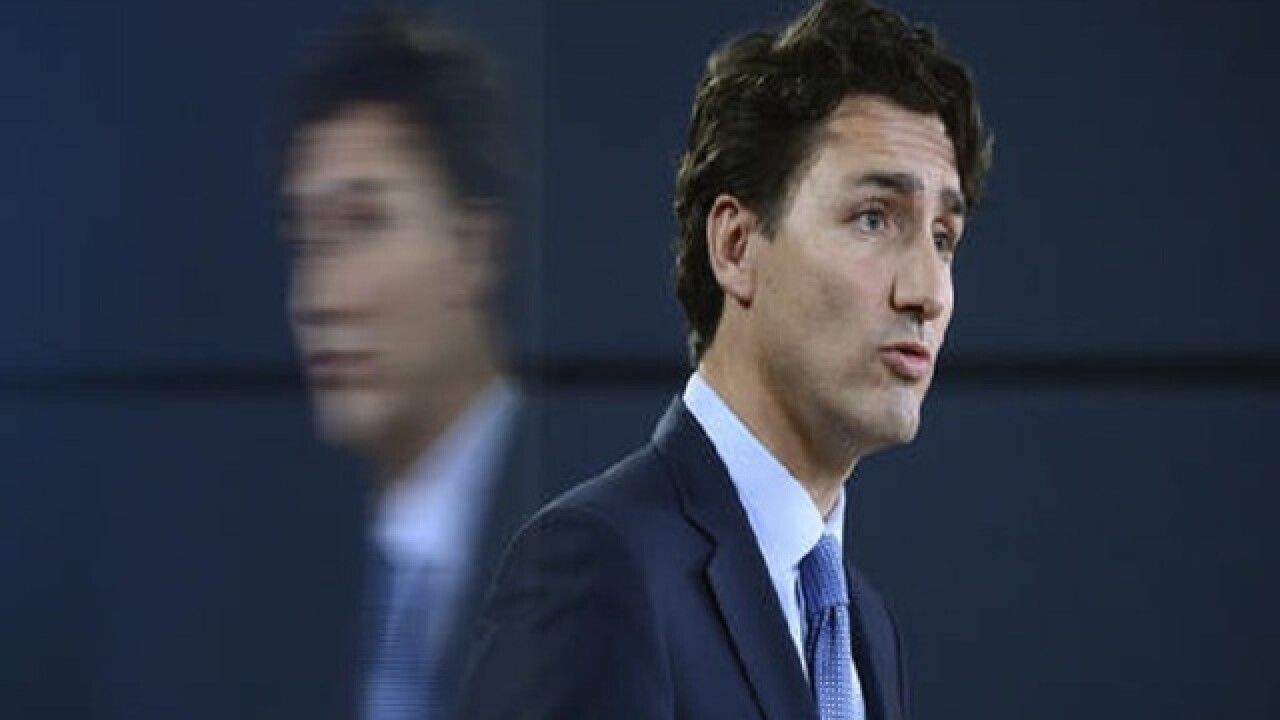 TORONTO (AP) — Canadian Prime Minister Justin Trudeau on Tuesday approved one controversial pipeline from the Alberta oil sands to the Pacific Coast, but rejected another.
He approved Kinder Morgan's Trans Mountain pipeline to Burnaby, British Columbia, but rejected Enbridge's Northern Gateway pipeline to Kitimat, B.C.
These are the first major pipeline decisions for Trudeau, whose Liberal government is trying to balance the oil industry's desire to tap new markets in Asia with environmentalists' concerns.
"The project will triple our capacity to get Canadian energy resources to international markets beyond the United States," Trudeau said at an Ottawa news conference. "We took this decision today because we believe it is in the best interests of Canada." He added that the Trans Mountain pipeline expansion "meets the strictest of environmental standards."
Alberta, which has the world's third largest oil reserves, needs infrastructure in place to export its growing oil sands production. Approving Trans Mountain helps diversify Canada's oil exports. Ninety-seven percent of Canadian oil exports now go to the U.S.
"We are getting a chance to sell to China and other new markets at better prices," Alberta Premier Rachel Notley said. "And we're getting a chance to reduce our dependence on one market and therefore be more economically independent."
Houston-based Kinder Morgan's Trans Mountain pipeline expansion to Vancouver Harbour in Burnaby will increase the capacity of an existing pipeline from 300,000 to 890,000 barrels per day.
But there remains opposition to the Trans Mountain pipeline in British Columbia, the birthplace of the Greenpeace environmental movement. There is no guarantee it will get built despite Trudeau's approval as it faces strong opposition from environmentalists and indigenous leaders. Vancouver, B.C. Mayor Gregor Robertson said he was profoundly disappointed by Trudeau's decision and said it would bring seven times the number of oil tankers to Vancouver's waters.
Interim federal opposition Conservative leader Rona Ambrose said she supports the Kinder Morgan pipeline expansion, but doubts it will be built because of the opposition.
Trudeau rejected the Northern Gateway project to northwest British Columbia which passes through the Great Bear Rainforest. Northern Gateway would have transported 525,000 barrels of oil a day from Alberta's oil sands to the Pacific to deliver oil to Asia, mainly energy-hungry China.
About 220 large oil tankers a year would have visited the Pacific coast town of Kitimat. The fear of oil spills is especially acute in the pristine corner of northwest British Columbia, with its snowcapped mountains and deep ocean inlets. Canadians living there still remember the 1989 Exxon Valdez oil spill off an Alaska export hub. 1989.
Trudeau also promised to introduce legislation for a moratorium on crude oil tanker shipping on B.C.'s north coast.
"The Great Bear Rainforest is no place for a pipeline and the Douglas Channel is no place for oil tanker traffic," Trudeau said.
Northern Gateway was approved by the previous Conservative government but a federal appeals court blocked it, ruling that aboriginal communities had not been adequately consulted. That put the decision on Northern Gateway in Trudeau's hands.
Trudeau also approved a lesser known Enbridge pipeline replacement called Line 3 that will carry oil from Alberta to the U.S. Midwest. That pipeline will carry oil from Alberta, through northern Minnesota to Superior, Wisconsin. The Line 3 project would nearly double the existing pipeline's volume to 760,000 barrels a day.
Notley said Trans Mountain and Line 3 are critical to the oil-rich province's economic future.
The importance of Trudeau's decisions on pipelines only grew after the Obama administration turned down TransCanada's Keystone XL pipeline that would have taken Alberta oil to the U.S. Gulf Coast. President-elect Donald Trump has expressed support for Keystone XL.
Trudeau noted that more oil would end up being transported by rail if more pipelines are not built. There have been a number of accidents involving oil trains during the past decade in the U.S. and Canada. The worst occurred in 2013 when a runaway train derailed and set off fires that killed 47 people in Lac-Megantic, Quebec.
Copyright 2016 The Associated Press. All rights reserved. This material may not be published, broadcast, rewritten or redistributed.