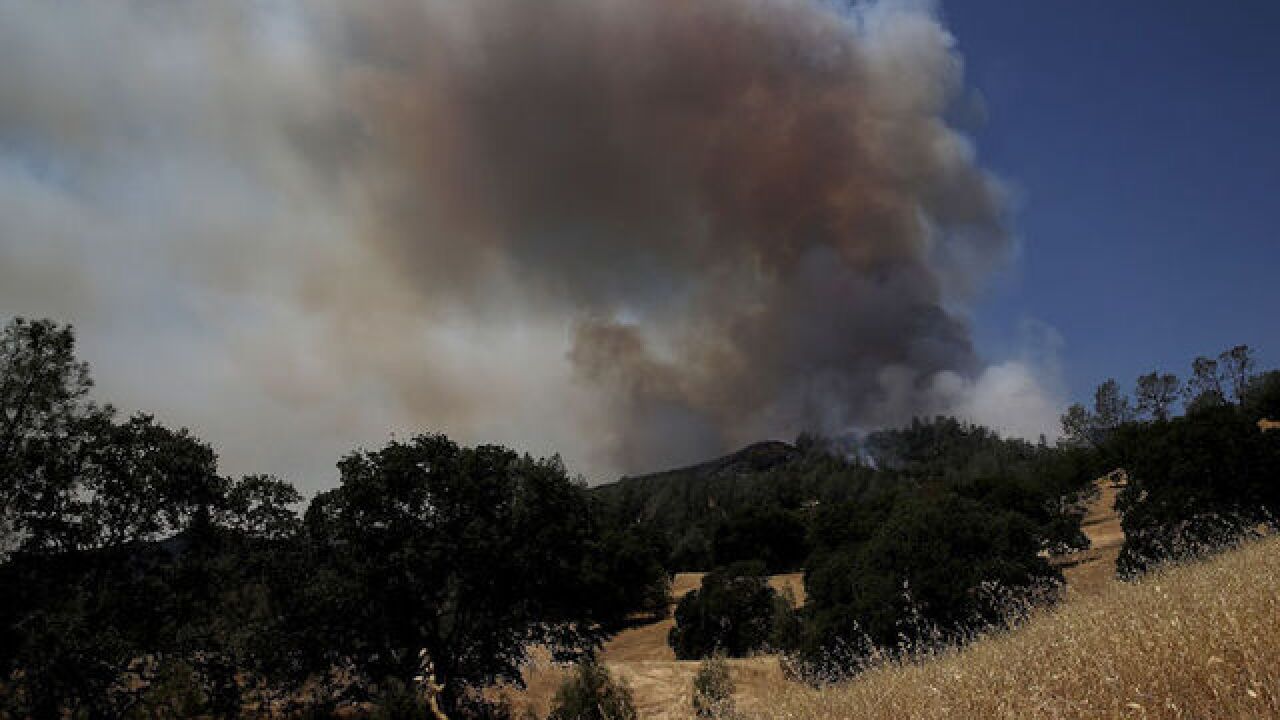 Image copyright 2018 Getty Images. All rights reserved. This material may not be published, broadcast, rewritten, or redistributed.
Justin Sullivan
<p>Smoke rises from the County Fire as it burns through dry brush on July 2, 2018 in Guinda, California. </p>

A fast-moving wildfire that has already claimed one life and injured three firefighters has spread from northern California into Oregon.

The Klamathon Fire, which started July 5 in Siskiyou County, California, has consumed more than 35,000 acres, according to Cal Fire.

Several areas in Oregon's Jackson County have now been issued red-alert evacuation notices, meaning residents should leave immediately. Others have been assigned a yellow "be set" warning, according to Cal Fire.

Progress is being made to control the blaze, with containment at 30 percent Monday -- up from 25 percent Sunday night. Eighty-one structures have been destroyed, with a further 810 said to be at risk.

The affected area is about 300 miles north of California's capital, Sacramento. Residents near the communities of Hilt, Hornbrook, Colestin and the Irongate Reservoir are urged to evacuate.

Officials did not immediately release any details about the identity of the person whose death is being blamed on the blaze -- or the cause of that death.

The cause of the fire itself, one of 10 currently burning in California, is still being investigated. Whatever the cause, rising temperatures, low humidity and windy conditions have helped fan the flames, said Cal Fire Deputy Chief Scott McLean.

More than 2,700 emergency personnel have been fighting the flames.

Other fires in California

The County Fire, currently the largest wildfire scorching the region, has burned over 90,000 acres and is 73 percent contained. It is affecting parts of Napa and Yolo counties, both less than 60 miles east of Sacramento.

The West Fire has burned over 500 acres in San Diego County, leaving 34 homes destroyed. It is 92 percent contained. All evacuations and road closures were lifted Sunday afternoon, Cal Fire said.

In Santa Barbara County (about 100 miles northwest of Los Angeles), the Holiday Fire has burned 100 acres but is now 90 percent contained.

The Valley Fire in San Bernardino has burned 1,131 acres and is 13 percent contained.

States of emergencies have been issued by Gov. Jerry Brown in the areas affected by the West and Holiday fires.

Fires across the West

Three people are now facing arson charges in connection with the High Chateau Fire in Colorado, according to CNN affiliate KKTV . That fire has burned over 1,400 acres and destroyed eight homes, as well as other buildings.