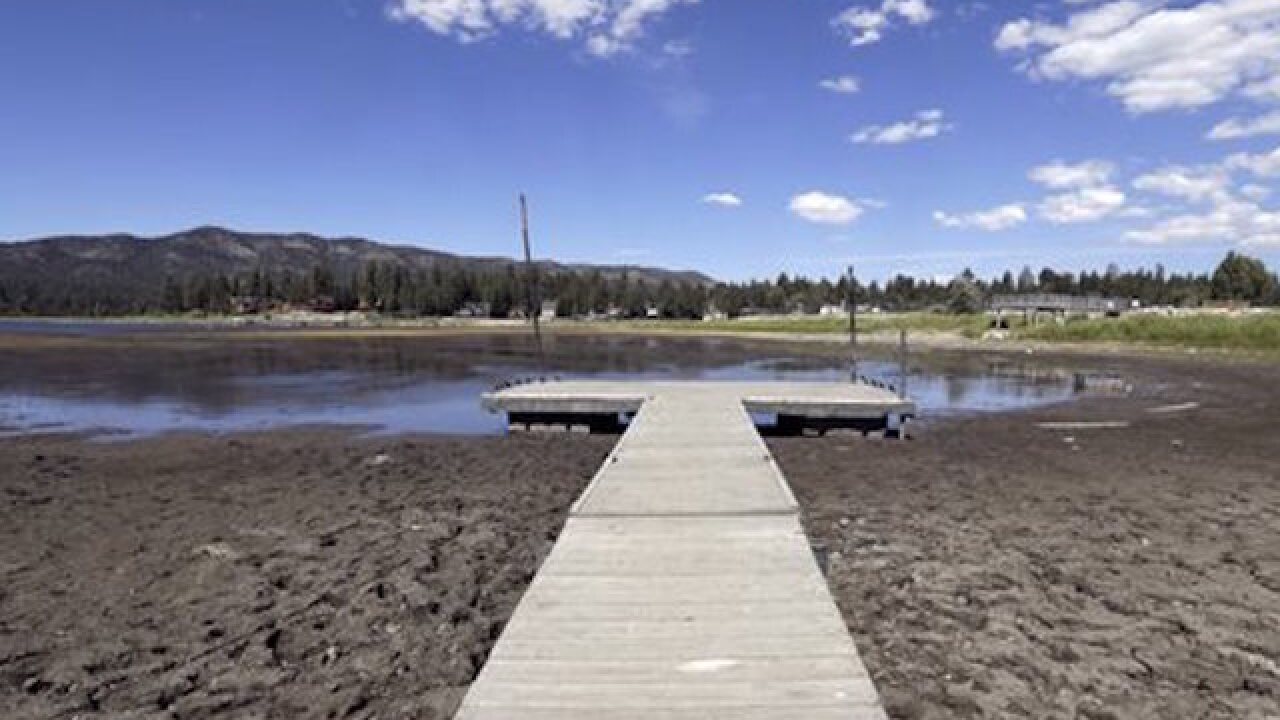 Copyright Associated Press
Nick Ut
<p>FILE - This Monday, Aug. 24, 2015 file photo shows the lake bed where water has dried due to the drought at Big Bear Lake, Calif. The State Water Resources Control Board on Thursday, Oct. 1, 2015 said Californians have surpassed a mandate to save water for a third consecutive month, using nearly 27 percent less in August than the same month in 2013. (AP Photo/Nick Ut,File)</p>

Members of the state Water Resources Control Board - czars of the state's drought emergency program - will decide May 18 whether to remove the 11-month-old statewide order.

Cities and water agencies that can prove they have enough water to get by if the wet winter proves a blip, and drought continues another three years, would be able to get out from under a mandatory conservation target. The rest would be required to save enough water to cover that longer-term drought shortfall.

"This is not a time to start using water like it's 1999 ... this year could simply be a punctuation mark in a mega-drought," warned Felicia Marcus, chairwoman of the state water board.

Californians had achieved a nearly 25 percent overall cut in water use, saving an amount of water that would supply 17 percent of the state's population for a year. Water districts paid families to rip out water-thirsty lawns and tried name-and-shame techniques for celebrities and others who failed to conserve.

Gov. Jerry Brown, who ordered the conservation in April 2015 at the worst of California's driest four-year stretch in history, made clear Monday that conservation must continue even if the statewide target is lifted.

With climate change, "we know that drought is becoming a regular occurrence and water conservation must be a part of our everyday life," Brown said in a statement.

Brown issued an executive order Monday that would make permanent some of the measures adopted to deal with the current drought.

The state's roughly 400 water districts would be required to keep reporting their monthly water use, a requirement laid down last summer.

Water-wasting measures such as letting lawn sprinklers send water streaming into the street, or washing cars in the driveway without a shut-off nozzle on the hose, would be banned permanently, for example.

A strong El Nino brought Northern California winter storms that have filled water reservoirs in that part of the state higher than in most years, and laid down Sierra Nevada snowpack that is vital to the state's year-round water supply.

But nearly 90 percent of California remains in moderate drought or worse. Southern California overall is heading deeper into, not out of, the fifth year of drought, the government's U.S. Drought Monitor said last week.

"We got a reprieve" thanks to El Nino, Marcus, the water board chairwoman, said Monday. With climate change already making California hotter and drier long-term, "We need to use this moment wisely to prepare for the years ahead."