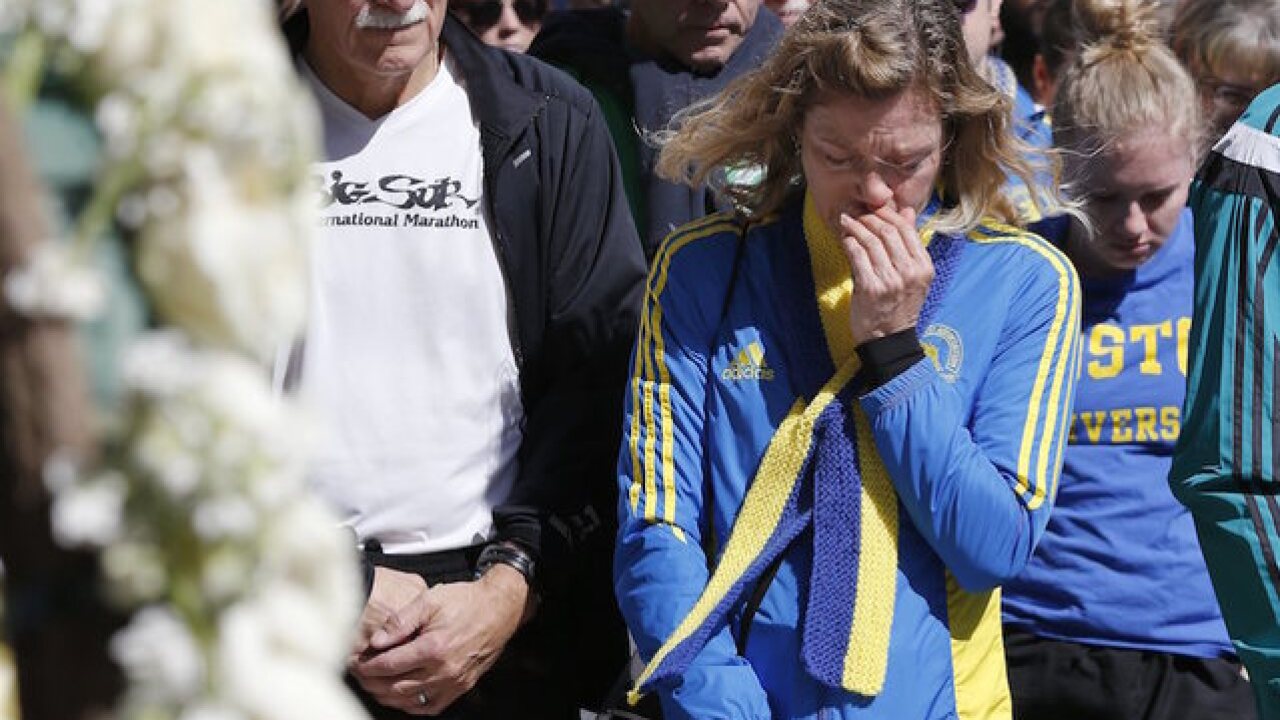 Copyright Associated Press
Michael Dwyer
<p>People, including Jody Stoops, center, of Yorba Linda, Calif., observe a moment of silence at the site where the first of two bombs detonated at the Boston Marathon finish line on the third anniversary of the bombings, Friday, April 15, 2016, in Boston. (AP Photo/Michael Dwyer)</p>

The victims of the deadly 2013 Boston Marathon bombings are being remembered today as the annual event takes place.

On Friday, the city marked the third anniversary of that fatal day with subdued, silent remembrances.

Mayor Marty Walsh and the families of 8-year-old Martin Richard and 23-year-old Lingzi Lu — the other two killed — placed another wreath at the site of the second bomb blast.

No one spoke. A bagpipe played softly before the occasion, which was observed by nearly 100 people including survivors, their families and supporters.

A multicolored banner with a peace sign, a heart and words Martin Richard had written before his death — "no more hurting people ... peace" — hung on an empty storefront.

Two men placed crosses on a tree honoring the victims, including Massachusetts Institute of Technology Police Officer Sean Collier, who was killed by the attackers in the ensuing manhunt.

Scott Weisberg, a 46-year-old Birmingham, Alabama, physician who finished the 2013 marathon seconds before the first bomb detonated, said he comes back each year for the anniversary and to run the race.

He wears hearing aids now because he suffered hearing loss and recently closed his medical practice because he continues to deal with memory loss and speech processing problems from head injuries he sustained in the blast.

"This is a special time to connect. I have a second family who understands what I'm going through," Weisberg said. "The first year, a lot of us were just trying to figure things out. I think the focus now for many of us is where we're going, what we're going to do with the second half of our lives."

Throughout the day, residents took part in blood drives, food and clothing collections and other community service projects as the city has proclaimed April 15 "One Boston Day," a day to celebrate the city's resilience through acts of kindness and generosity.

Martin Richard's family helped clean up a busy commercial street and square in their Dorchester neighborhood while Lu's family made a donation to the Police Department's Athletic League.

"This is how they wanted to show their kindness so we're here to support them," said Sheila McCarthy, a friend of the Richard family, as she and dozens of other volunteers picked up trash, cleared brush and planted flowers along Dorchester Avenue.

At 2:49 p.m., a citywide moment of silence marked the time when the first bomb detonated. Church bells tolled on Boylston Street as crowds gathered around the flower wreaths.

Many wore Boston Marathon jackets and left flowers and other mementos.

At one point, a handful of survivors, some walking on prosthetic legs, crossed the finish line together to applause.

Jody Stoops, of Yorba Linda, California, stood in front of a wreath reflecting on the three years since she crossed the finish line moments before the blasts.

On Monday, she'll join more than 30,000 expected to participate in the 120th running of the race.

"I feel like I've come full circle," she said, wearing her blue and yellow 2013 marathon jacket like many in the crowd. "The first year after was very emotional. But this year, I'm filled with joy and excitement to run. I'm not anxious. I'm not nervous. I'm not scared. I feel like I'm coming home."