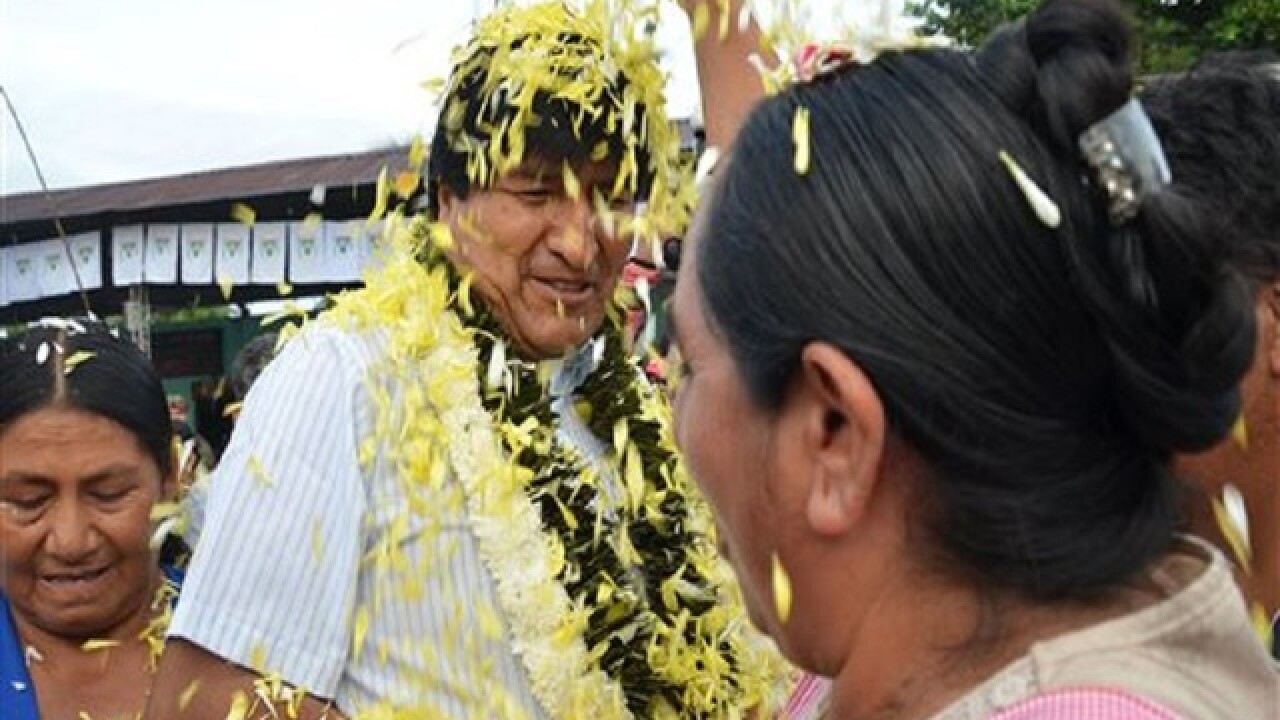 LA PAZ, Bolivia (AP) — President Evo Morales' bid to run for another term by amending the constitution appeared headed toward a slim electoral defeat Sunday, according to unofficial partial vote counts and early results.
Morales has governed for a decade. A "yes" vote in Sunday's referendum would have let Bolivia's first indigenous president seek a fourth term in 2019.
The vote couldn't have come at a worse time for Morales. In the past two weeks he has been stung by an influence-peddling scandal involving a former lover and a deadly incident of political violence.
Two unofficial "quick counts" by polling firms put the "no" vote slightly ahead. The Ipsos-Apoyo firm had it lead 52 percent to 48 percent. It counted ballots at one in 15 polling stations.
The official vote count was slow, particularly in rural areas where support for Morales is strongest. With just 8 percent counted, the ballot question was being rejected by 65 percent.
Bolivia's constitution, which was enacted in Morales' initial term, permits presidents and vice presidents to serve two consecutive terms. Morales' first term was deemed by the country's constitutional court not to have counted, so the proposed change to allow a president to seek re-election twice would allow him to run again.
Leonel Fernandez, the former Dominican Republic president heading an Organization of American States observer team, said voting Sunday was conducted "normally and peacefully."
Pre-election polls said voters who had decided were evenly split on the change, while about 15 percent were undecided.
But the polls were done before the revelation by an opposition-aligned journalist that a former lover of Morales in 2013 was named sales manager of a Chinese company that has obtained nearly $500 million in mostly no-bid state contracts.
Morales denied any impropriety and said he last saw the woman in 2007.
The case deepened doubts about the integrity of Morales' governing Movement Toward Socialism, which has been buffeted by scandal.
"My wish is for the greatest citizen participation possible and that this day be historic," Morales said after voting in Chapare, where he began his political career as a leader of coca growers union.
Adding to Morales' woes were last week's asphyxiation deaths of six municipal officials in El Alto, the teeming city adjacent to the capital of La Paz run since last year by an opposition mayor.
Pro-Morales forces were accused of setting the blaze that caused the deaths, sacking the building and burning documents that allegedly incriminated the previous mayor in payroll corruption.
Both developments threatened to eclipse Morales' achievements in cutting poverty, spreading Bolivia's natural resource wealth and empowering its indigenous majority during a decade in office.
Eusebio Condori, a retired schoolteacher, said he voted "no" because the scandal and the deaths "confirm that this government doesn't have a plan for Bolivia, only for itself."
A mother of three, Maria Espinoza, said she voted "no" because she believes in term limits. She echoed the complaint of others that too many jobs depend on political patronage.
"I hope for change in the country," she said.
Alejandro Perez, an independent lawyer, said he voted "yes" because "we've got to ensure continuity."
South America's left has recently been sullied by scandal but Morales had personally remained unscathed.
His movement has been discredited, however, by the skimming of millions from the government-managed Fondo Indigena, which runs agricultural and public works in the countryside.
Morales presided over Bolivia's biggest economic boom while prices for raw materials soared just as he took office, constructing airports, highways and the pride of La Paz, an Austrian-built aerial tramway system, and putting a Chinese-built satellite into space. In 2014, he won re-election with 60 percent of the vote.
But that boom is over. Bolivia's revenues from natural gas and minerals, making up three-fourths of its exports, were down 32 percent last year.
Economists say Morales leaned heavily on extractive industries to pay for populist programs and failed to diversify the economy.
Under Morales, average per capita income rose from $873 to $3,119 and a new indigenous middle class was born.
But judicial corruption has been endemic and press freedom suffered as major news outlets were purchased by people friendly with the government and critical media and environmentalists complained of harassment by the state.
Associated Press 2016