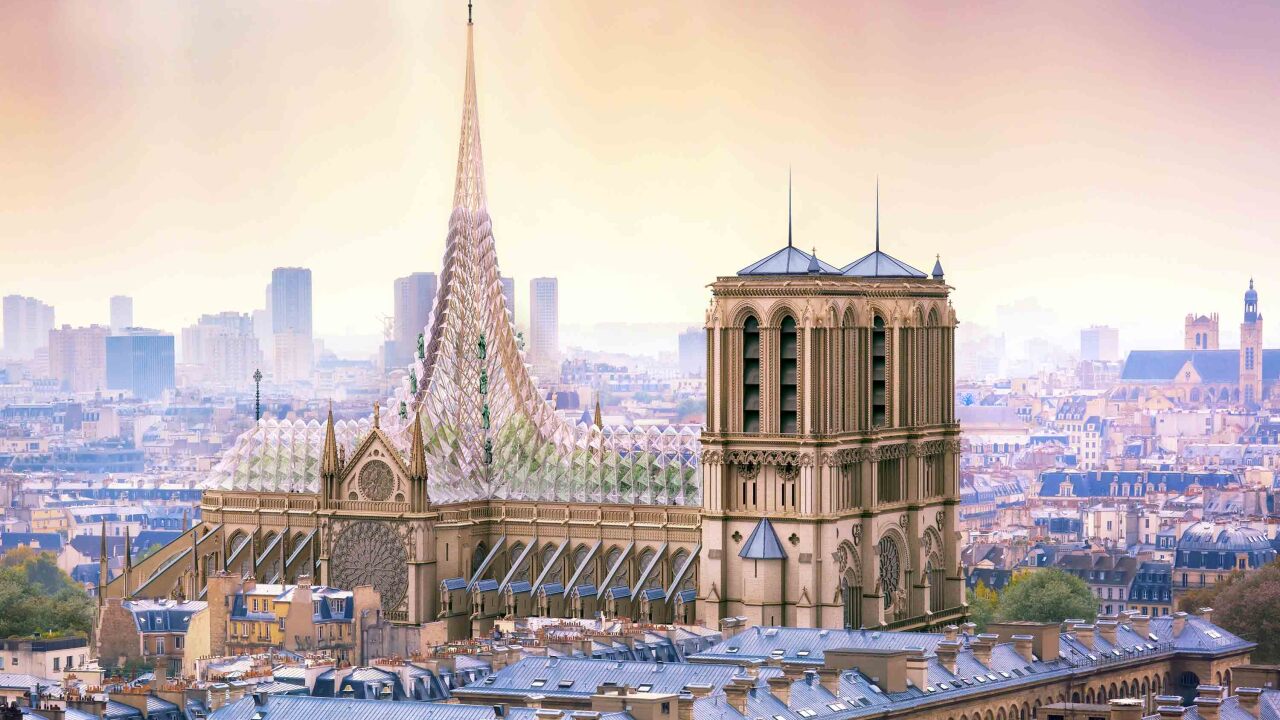 (CNN) -- The rebuilt Notre Dame could feature a futuristic glass design, solar power, and an urban farm that supports vulnerable and homeless Parisians, if one architecture firm's vision is realized.

In April, French Prime Minister Edouard Philippe announced an international competition for architects to redesign the cathedral's 19th century spire, which collapsed after a fire devastated the 850-year-old Gothic landmark. Paris firm Vincent Callebaut Architectures responded to the call with an innovative, eco-friendly design that supports the local population and produces more energy than it uses.

The Vincent Callebaut project is titled "Palingenesis," a Greek concept of rebirth or recreation. The firm proposes a new roof made of glass, oak and carbon fiber, which connects "in one single curved stroke of pencil" to the sloping spire. The rooster which topped the original spire, retrieved from the rubble after the fire, will resume its watch from the new glass design, while the cathedral's choir will be "bathed in natural light."

Beneath the spire, the roof will host a fruit and vegetable farm run by charities and volunteers, in order to produce free food for vulnerable local people. "Up to 21 tons of fruits and vegetables could be harvested and directly redistributed for free each year," the firm said in a press release. "To that end, a farmers' market would be held every week on the forecourt of Notre Dame."

The roof and spire will also produce electricity, heat and ventilation for the cathedral: an "organic active layer" within the glass will provide solar power, while the roof's diamond-shaped "scales" will open to offer natural ventilation -- a design inspired by termite mounds. The spire will act as a "thermal buffer space" in which hot air accumulates in winter.

"How can we write the contemporary history of our country, but also that of science, art and spirituality together?" the firm said in a press release. "We seek to present a transcendent project, a symbol of a resilient and ecological future."

If the Vincent Callebaut design is selected, the firm said, the reborn Notre Dame will define "the new face of the Church in the 21st century," presenting "a fairer symbiotic relationship between humans and nature."