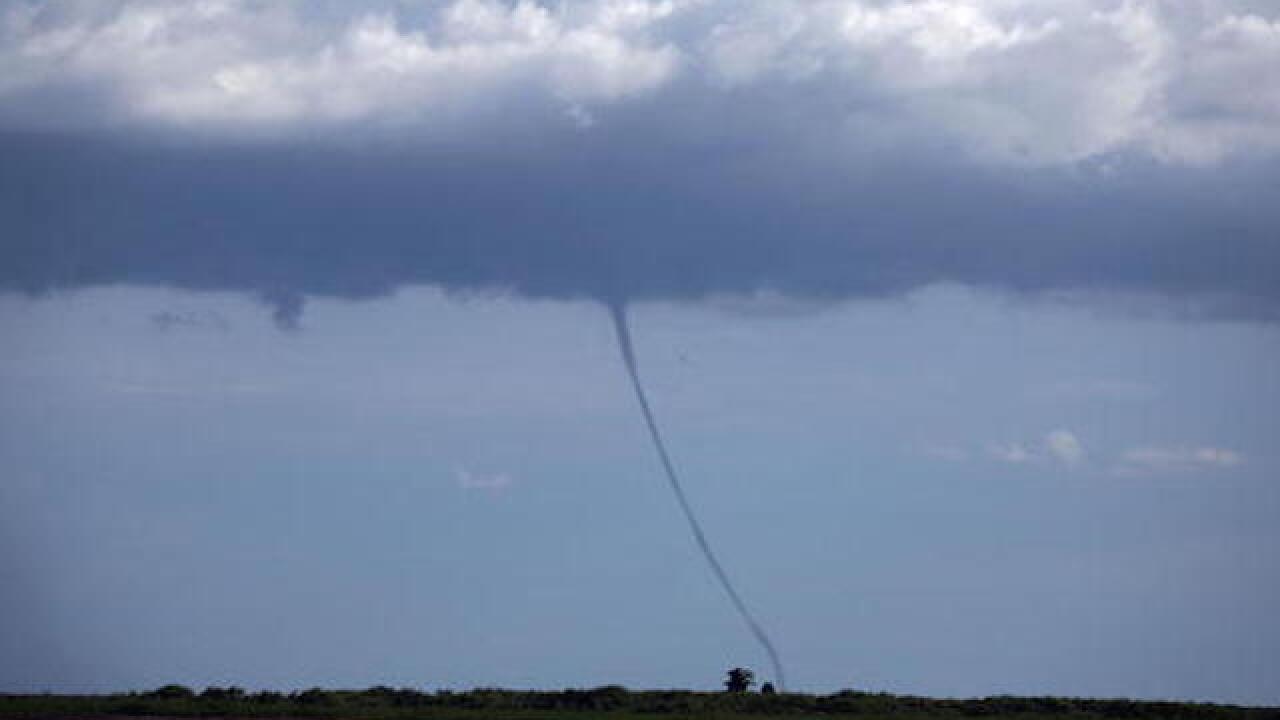 Joe Raedle
<p>OKEECHOBEE, FL - JULY 9: A waterspout touches down over Lake Okeechobee July 9, 2007 in Okeechobee, Florida. The waterspout was formed by a passing rain storm that brought welcome rain to a region in the middle of a drought. (Photo by Joe Raedle/Getty Images)</p>

Suspected tornados touched down in a rural town on Florida's Panhandle and in Mississippi on Monday, destroying up to 10 homes, damaging a school, and sending fire crews out to investigate reports of residents trapped under rubble.

The tornadoes were part of a large winter storm system that was clobbering the eastern U.S. with snow, sleet, strong winds and rain, and which came on the heels of record-breaking low temperatures.

Officials in Florida and Mississippi were investigating reports of at least three possible tornadoes. One of the apparent twisters swept through the rural town of Century, in the northwest corner of Florida's Panhandle, late Monday afternoon, destroying or significantly damaging about 10 homes, said Escambia County spokeswoman Joy Tsubooka.

Tsubooka said fire crews were investigating reports that some residents may have been trapped in the rubble of destroyed homes, but she said several of the reports had already proved to be unfounded. She said some people had reported minor cuts from flying debris but that she had not received any reports of serious injuries.

Century is located on the Florida-Alabama border about 45 miles north of Pensacola, Florida. Pensacola news station WEAR-TV showed a large, black funnel cloud touching down on a highway near the town, and images submitted by viewers to the news station's Facebook page showed downed trees and damage to the exteriors of at least two homes. Gulf Power reported on its website that about 800 people in Century were without electricity.

Radar had indicated a tornado present in the storm system that moved over Century into Brewton, Alabama, said Gene Jacobi with the National Weather Service in Mobile, Alabama. He said the weather service would send crews out Tuesday to survey areas where damage and the funnel cloud had been reported.

In Mississippi, windows were blown out of cars and two gymnasiums and a library were damaged at a K-12 school in Wesson where children were in attendance when heavy thunderstorms and a possible tornado walloped at least 19 counties. There were no reports of any students injured, said Mississippi Department of Education spokeswoman Patrice Guilfoyle.

Emergency management officials also reported a destroyed mobile home in Lincoln County, Mississippi, while a gas station and some homes were damaged in Sylvarena in Smith County. More than 18,000 power customers were without power.

In the eastern U.S. on Monday, a day after record low temperatures plunged several states into a deep freeze, wet weather including snow, freezing rain and sleet were pummeling the region.

National Weather Service meteorologist Bruce Sullivan said there could be significant snowfall — 4 to 8 inches — in eastern Ohio, western Pennsylvania and western New York. Some mountainous areas could get even more snow.

With federal offices and many businesses closed for Washington's Birthday, though, many people were able to hunker down at home.

In Virginia, the state police asked motorists to delay any unnecessary travel until weather conditions could improve. By late afternoon, authorities were on the scene of 37 traffic crashes statewide, including a fatal crash in Fauquier County. Troopers also were responding to nine disabled vehicles across Virginia. They already had responded to 538 traffic crashes and 347 disabled vehicles for the day.

In North Carolina, light freezing rain, sleet and snow caused wrecks and closed schools and businesses. The National Weather Service said the precipitation was light Monday morning, but with temperatures in the 20s, it was freezing immediately on bridges, roads and other surfaces.

By Tuesday, when temperatures get higher, the rain and some runoff could cause flooding in some areas, Sullivan said.

Sunday's teeth-chattering temperatures were some of the coldest on record.

In several Northeastern cities — including New York, Boston and Hartford, Connecticut — temperatures on Sunday morning dipped below zero, falling to minus 40 on Mount Washington in New Hampshire.

The National Weather Service said the temperature in New York City's Central Park fell to minus 1, a record low for the date. The last time it was below zero in Central Park was in January 1994.

In Montpelier, Vermont, the overnight temperature hit minus 19, tying a record set in 2003. And South Lincoln, Vermont, recorded 27 below zero.

Outreach teams brought 105 people into New York shelters, and 288 showed up at hospitals and health facilities, including more than 20 who were brought in for care needed immediately, New York Mayor Bill de Blasio said.