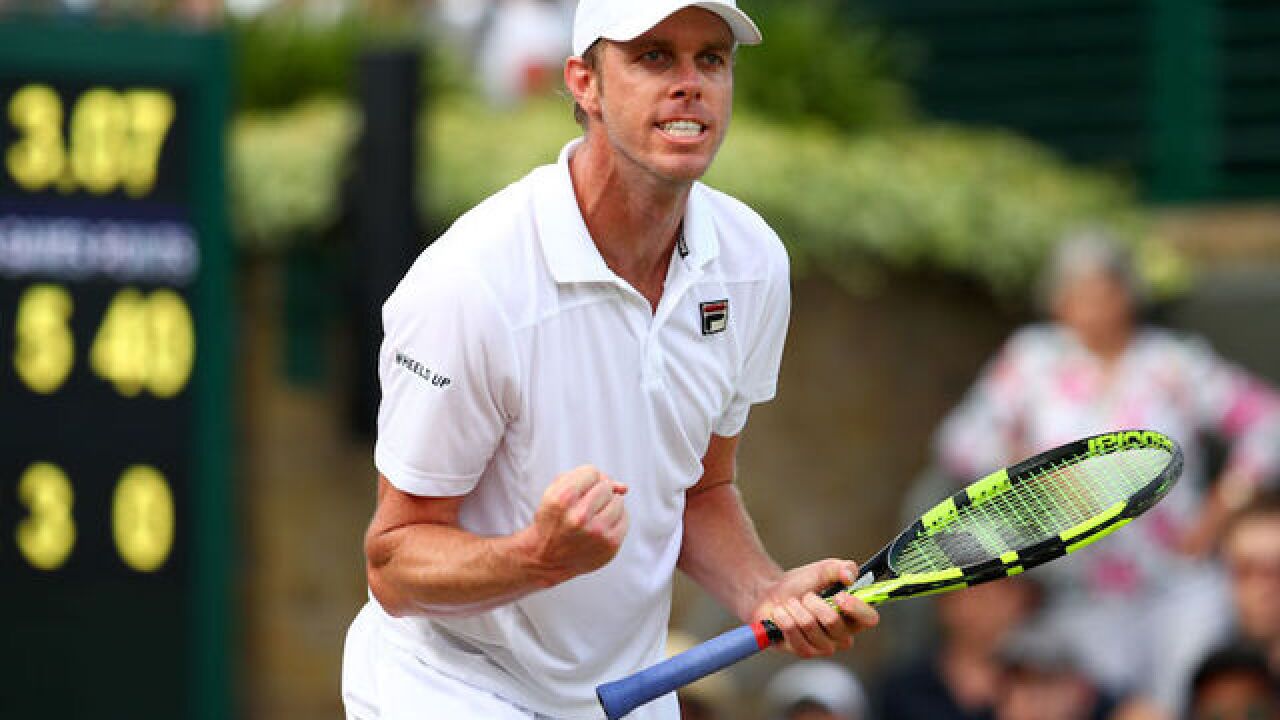 Copyright Getty Images
Clive Brunskill
<p>LONDON, ENGLAND - JULY 10: Sam Querrey of The United States celebrates match point and victory after the Gentlemen's Singles fourth round match against Kevin Anderson of South Africa on day seven of the Wimbledon Lawn Tennis Championships at the All England Lawn Tennis and Croquet Club on July 10, 2017 in London, England. (Photo by Clive Brunskill/Getty Images)</p>

Andy Murray and Novak Djokovic -- the pair who dominated men's tennis last year -- both departed the Wimbledon quarterfinals on Wednesday banged up.

Then Djokovic -- whose grand slam reign was ended by the American last year here in four sets -- retired trailing 2010 finalist Tomas Berdych 7-6 (2) 2-0 with an elbow injury that the Serb says has affected him for more than one-and-a-half years.

"We both had a very long, very tough year, a lot of matches, a lot of emotions, a lot of things in play," Djokovic said, referring to 2016. "Our bodies have taken a lot physically."

Sam Querrey, a native of Las Vegas, becomes the first American to play in a men's semifinal since 2009.

"This year just feels a little better than last year," 28th-ranked Querrey told reporters. "I was probably a little more fired up today, especially in the fourth and fifth sets. There's a little more on the line."

There were no such issues for the evergreen Roger Federer, who swept past 2016 finalist Milos Raonic 6-4 6-2 7-6 (4) in his 100th Wimbledon encounter on a day where chilly, overcast conditions gave way to warm sunshine. Federer -- Berdych's next foe -- set a record by landing in a 12th semifinal at The All England Club.

Last year Raonic ended Federer's season in the Wimbledon semifinals but in the Centre Court rematch, the Swiss only really encountered any resistance in the third set. He is now the considerable favorite to win a record eighth Wimbledon title.

But "being the favorite or not the favorite doesn't matter," the 35-year-old said. "These other guys are all big hitters. I feel like they will have their word to say on the outcome of the matches."

Querrey will play Croatia's Marin Cilic in the other semifinal Friday after the 2014 US Open champion ended the dream run of 16th-seed Gilles Muller -- who had ousted 15-time grand slam winner Rafael Nadal in a five-set, five-hour classic Monday.

Muller, however, didn't bow out tamely as Cilic needed five sets to prevail 3-6 7-6 (6) 7-5 5-7 6-1 on Court One over the left-hander from Luxembourg. The defining moment came in the second-set tiebreak when the huge-serving Muller relinquished a 5-3 advantage.

Querrey once gained fame for appearing on reality TV show "Millionaire Matchmaker" -- there ultimately was no long lasting relationship -- but Querrey's tennis results are now gaining him a heftier reputation.

Throughout the tournament questions were asked of Murray's sore hip -- the injury that forced the Scot to pull out of an exhibition and contributed to an early loss at a grass-court tuneup. As he cruised through the draw, his opponents kept saying the same thing: He was moving just fine.

But on Centre Court against the 6ft 6in Querrey, it was apparent Murray was troubled.

He failed to generate much lift on his serve and couldn't patrol the baseline with his usual energy. The last two sets were swift, lasting a combined 49 minutes. To end points quicker, Murray repeatedly opted for drop shots.

"The whole tournament I've been a little bit sore," Murray admitted to reporters. "But I tried my best right to the end, gave everything I had. I'm proud about that.

"But it's obviously disappointing to lose at Wimbledon. There's obviously an opportunity there so I'm sad that it's over."

The match probably would have turned out differently had Murray won the second set -- which he led by a break at 4-3.

"Maybe I could have got the match done in three sets had I closed out the second after getting the break," said the twice Olympic champion.

"I was pretty close. It wasn't like I was a million miles away from winning the match.

"Obviously, the end was a bit of a struggle, but I almost found a way to get into the semis."

Almost, but not quite enough.

And so continued Murray's turbulent 2017, mirroring his friend Djokovic.

He suffered with shingles and hurt his serving elbow before impressively making the French Open semifinals. But his sojourn in Paris didn't lead to another Wimbledon success, the hip the main culprit.

Querrey, of course, did what he had to and more, striking 27 aces and 70 winners, though Murray's impaired movement inflated those numbers.

It was the first time Murray had lost a match at Wimbledon after winning the first set since his 2012 defeat to Federer in the final.

Overall, he lost a fourth five-setter in succession, whereas Querrey has now won four straight five-set matches. The laid-back Californian, too, owns a 4-2 record against the top-10 in his last six encounters.