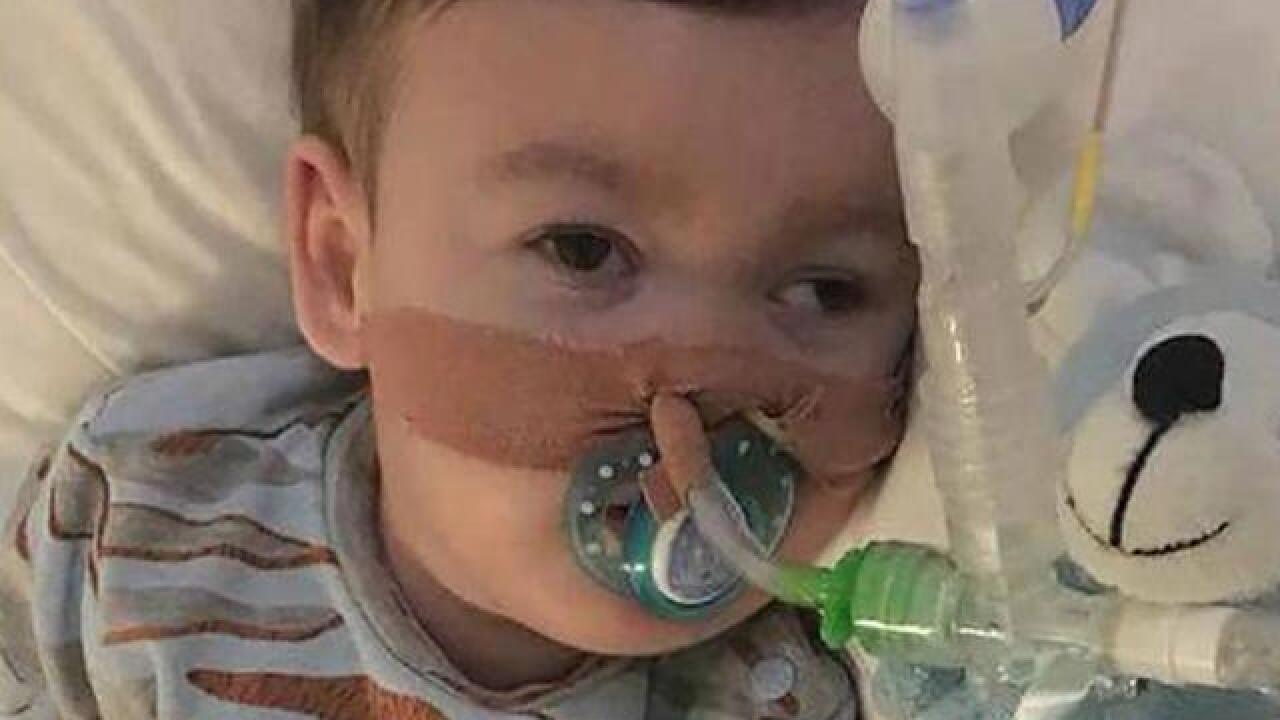 © 2018 Cable News Network, Inc.
ACTION4ALFIE
<p> The parents of terminally ill British boy Alfie Evans were to appeal on April 25, 2018, a decision preventing them from going to Rome for treatment following high-profile interventions in the case from Pope Francis and the Italian government. Toddler Evans, who suffers from a rare neurological disease, had his ventilator support removed late on April 23, ACTION4ALFIE/AFP/Getty Images</p>

Terminally ill British toddler Alfie Evans died overnight, days after life support was withdrawn, according to messages posted by his parents on Facebook on Saturday.

"My gladiator lay down his shield and gained his wings at 02:30. absolutely heartbroken. I LOVE YOU MY GUY," his father, Thomas Evans, wrote on the "Save Alfie Evans" Facebook page.

"Our baby boy grew his wings tonight at 2:30 am. We are heart broken. Thankyou everyone for all your support," his mother, Kate James, posted on the "Alfies Army Official" Facebook page.

The 23-month-old boy, who had a degenerative brain condition, had been at the center of a high profile legal battle over whether life support should be continued. The case has stirred strong emotions both in Britain and abroad, with hundreds of thousands signing petitions supporting him.

Alfie, who was admitted to Alder Hey Hospital in December 2016, was diagnosed with a neurodegenerative disease associated with severe epilepsy and had been in a semivegetative state for more than a year. During that time, he was kept alive by artificial ventilation in the critical care unit.

Disagreement between the hospital and his parents resulted in a referral of Alfie's case to the Family Division of the UK High Court for a judge to rule on whether active treatment was in Alfie's best interests.

When the court did not rule in their favor, the parents appealed the decision, and after that appeal was lost, the case was referred to the Supreme Court.

On Wednesday, judges on the UK Court of Appeal ruled against Alfie's family following a decision by the High Court on Tuesday that prevented Alfie from leaving Britain for further medical treatment.

The child's life support was withdrawn on Monday following orders by the High Court.

The hospital issued a statement Saturday expressing its "heartfelt sympathy and condolences to Alfie's family at this extremely distressing time."

It added: "All of us feel deeply for Alfie, Kate, Tom and his whole family and our thoughts are with them. This has been a devastating journey for them and we would ask that their privacy and the privacy of staff at Alder Hey is respected."

The hospital, which has seen crowds of protesters gather outside its doors, released a statement earlier this week from the Royal College of Paediatrics and Child Health stressing that "decisions to withhold or withdraw treatment from a child are not made lightly" and are based on a clear framework.

"The Alfie Evans case is extremely difficult for all involved; heartbreaking for his parents and emotionally challenging for the doctors and nurses involved in treating and caring for him," it said.

"In difficult situations such as these, and amongst the plethora of voices and opinions, it is important that the public know how such decisions are made."

Alfie's father had traveled to Rome earlier this month to meet Pope Francis, who had expressed his backing for their cause, and a hospital in Rome offered to treat the toddler.

However, a subsequent visit to Alfie and consultation with his doctors led the Roman doctors to conclude that the child's condition was irreversible and untreatable, according to a statement from Alder Hey.

In a statement posted on Facebook Thursday, Evans thanked hospital staff "at every level for their dignity and professionalism during what must be an incredibly difficult time for them too."