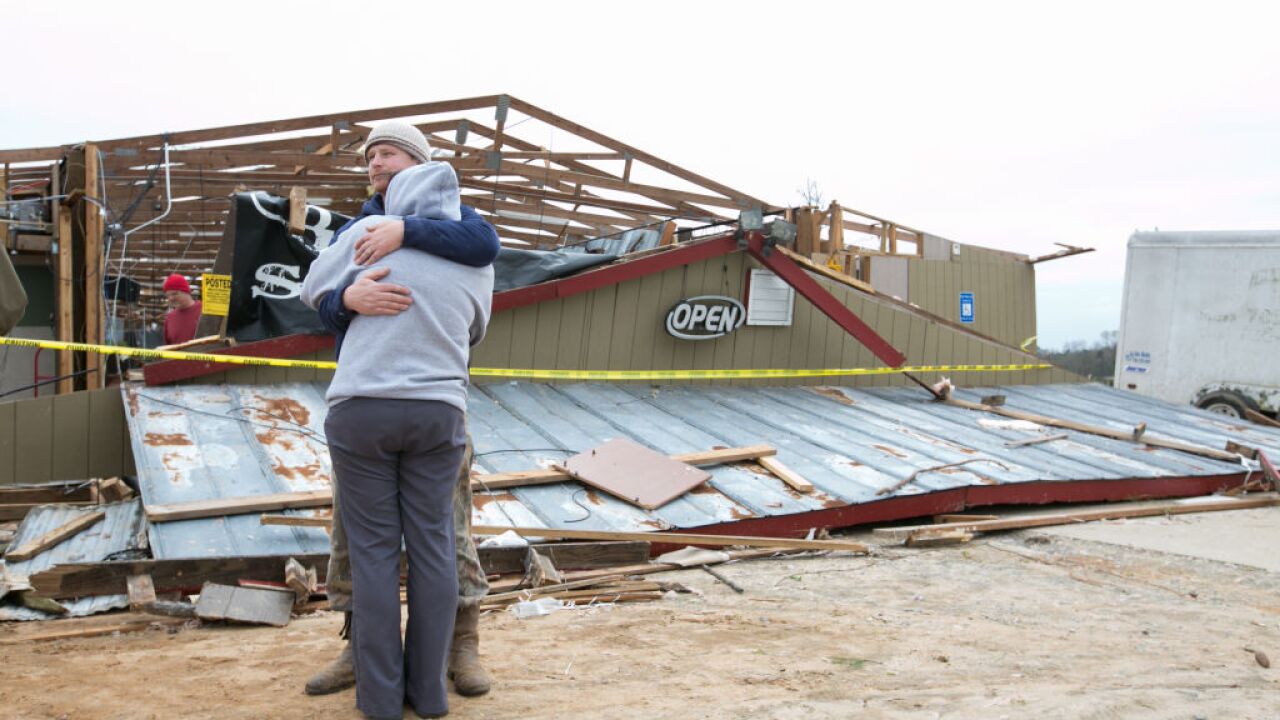 Three days after a string of tornadoes struck the Southeast, Alabama rescue teams are looking toward recovery and the families of those who died in the storms are preparing to lay their loved ones to rest.

Lee County Sheriff Jay Jones told reporters on Tuesday that heavy equipment is being used to clear debris and that the search and rescue mission will soon move to a recovery status.

Meanwhile, two corporations are stepping in to pay for the funerals of all 23 tornado victims in Alabama.

"What a wonderful blessing this will be for the families who have lost loved ones! To these corporations we thank you!" the Lee County Sheriff's Office said on Facebook.

Four tornadoes hit central Alabama on Sunday, the National Weather Service in Birmingham said. They left a trail of destruction in their path.

It looked "as if someone had taken a blade and just scraped the ground," Lee County Sheriff Jay Jones said.

Harris said that of the 23 people who died in the storms, four were children. Those killed ranged in age from 6 to 89.

Some families lose many

For some, the pain of loss is being felt many times over.

Erroll Reese told CNN affiliate WRAL that he lost seven members of his family to the tornadoes, and that at least 30 more now are without a home.

Reese told the station in a Monday night interview that fifteen of his family members lived on the same street in a lower middle-class area.

"It's devastating when you think about it," Reese said. "I was sitting there just a while ago thinking, 'How do you handle this, what do you do, who do you reach out to?' And before I knew it, people were reaching out to me trying to help."

In another family, Makitha Griffin lost five of her family members to the tornadoes.

Her aunts, Florel Tate Stenson, 63, and Tresia Robinson, 62; her uncles, Henry Lewis Stenson, 65, and Raymond Robinson Jr., 63; and her cousin 38-year-old Eric Jamal Stenson were among the nearly two dozen victims of the tornadoes.

A cousin who was in the same house as those killed sustained injuries and is now hospitalized, Griffin said.

Since Monday, Griffin has been feeding first responders who are searching for the missing and helping those who lost their homes.

She says that growing up, she learned the importance of community.

"Everybody was still family whether they were related or not," she said. "We gotta help our families."

Children among the victims

Taylor Thornton, a fourth grader at Lee-Scott Academy, was also among those killed, Stan Cox, the head of the school, confirmed to CNN after meeting with her parents.

"Very inquisitive, she loved learning and always contributed in a positive way," Cox said. "People were better because they were with her and now our school feels empty without her."

Armando, AJ to his family, was described as "a precious little man that was loved by everyone," and who "was always eager to give hugs and loved his family," according to a post on Facebook by his aunt Tina Melton.

Cousins Johnathan Marquez Bowen, 9, and Mykala Waldon, 8, were also killed in the tornado.

Johnathan's mother, Shamel Hart, told reporters at a news conference about the loss of two children in the family, according to CNN affiliate WRBL.

"I did a fireman carry over some trees, and when we got there there was a man in a truck, and he jumped out with a chainsaw and started plowing through trees to make a path for my cousin and me to bring our babies to him. He helped with CPR and transport," cried Hart.

As of Tuesday, officials said, the number of missing was seven or eight.

Dozens of people were injured, with 77 patients from areas affected by the tornadoes hospitalized on Sunday.

Lee County Emergency Management Agency director Kathy Carson told reporters at a Tuesday briefing that there has been an outpouring of offers of assistance. She said authorities are organizing a volunteer reception area for those who want to help.

Residents who've lost their homes can get shelter, food and medications, she said.

"We're here for the citizens. We cannot emphasize enough that we want them to communicate and let us know what they need," Carson said.

President Trump said he plans to visit Alabama on Friday.

"It's a tragic situation but a lot of work is getting done" in tackling the storm damage, he said Tuesday at the White House.

Tornadoes are measured on the Enhanced Fujita scale from 0 to 5 based on intensity and damage caused.

Three of the tornadoes were categorized as EF-1, but the Beauregard-Smiths station in Lee County was an EF-4 with winds of 170 mph.

Alabama Gov. Kay Ivey has extended the state of emergency that had been issued last month because of tornadoes and severe weather and made a request for a federal major disaster declaration.

Georgia Gov. Brian Kemp declared a state of emergency in Grady, Harris and Talbot counties, in the southern part of the state, where he said almost two dozen homes were destroyed and up to 40 sustained damage.