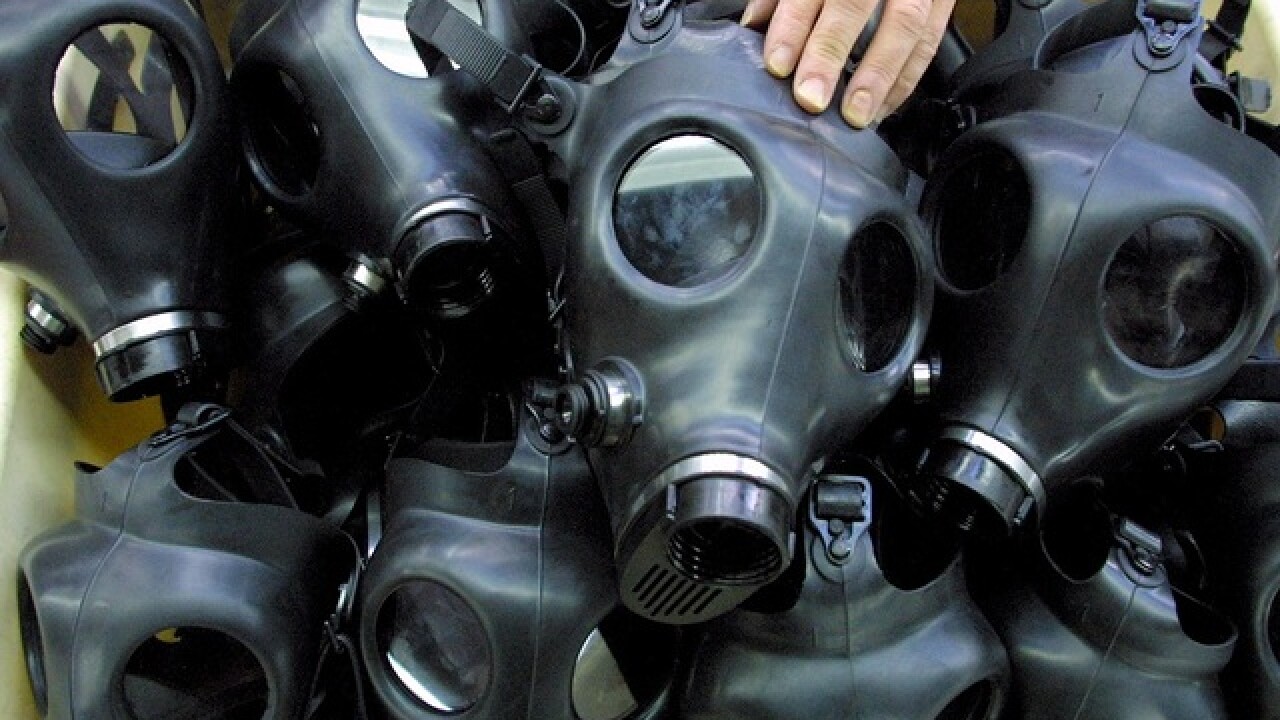 Copyright 2018 Scripps Media, Inc. All rights reserved. This material may not be published, broadcast, rewritten, or redistributed.
David Silverman
395131 04: A worker stacks adult gas masks on the production line at the Shalon factory September 30, 2001 in the Israeli town of Kiryat Gat. The factory is the main producer of chemical and biological warfare protection kits in Israel and their masks can be found in surplus stores in the United States. (Photo by David Silverman/Getty Images)

BILLINGS, Mont. (AP) — The U.S. Environmental Protection Agency granted final approval Monday to a costly cleanup program for a Montana community where health officials say hundreds of people have been killed by asbestos poisoning.
The agency's action comes more than 15 years after it started emergency cleanup work in Libby following media reports that revealed rampant, asbestos-caused illnesses in the small town near the Idaho border.
The price tag on the cleanup exceeded $540 million last year. It will cost an estimated $64 million and take at least four more years for the EPA to finish its work, according to documents released Monday.
Even after that's done, hazardous asbestos will remain beneath the soil and in the walls of many houses, where it was used for insulation. Also, about 700 properties have yet to be investigated to determine if any inhabitants are at risk.
Montana environmental regulators said in response to Monday's announcement that they want more details on how the EPA will handle future discoveries of asbestos. The EPA has promised to set up steps to deal with such instances but they are not yet fully in place.
"That's been the biggest concern," said Jeni Flatow with the Montana Department of Environmental Quality. "How do we handle it when we come across it? If we're digging utility lines and come across it, what are the protocols for protecting human health?"
Now that the cleanup plan has been approved, EPA officials said they will turn next to finalizing procedures to handle future asbestos discoveries. Those so-called "institutional controls" will be based on consultations with community leaders, the DEQ and others, said Rebecca Thomas, the EPA project manager in Libby.
"We know with great certainty that we will be leaving some contamination behind where it doesn't pose (immediate) risk of exposure," Thomas said.
The asbestos found in Libby can cause fatal lung diseases and other health issues. It came from a W.R. Grace and Co. vermiculite mine that operated for decades just outside town.
No attempt has been made to quantify how much will remain when the cleanup is finished, Thomas said.
Health workers have estimated that as many as 400 people have died and almost 3,000 have been sickened from exposure in Libby and the surrounding area.
The mine was shuttered in 1990. W.R. Grace agreed in a 2008 settlement to pay the EPA $250 million for cleanup work.
What's left of that money could run out by the end of 2017, Thomas said. After that, Montana will be responsible for 10 percent of the cleanup costs and all costs related to future operations and maintenance of the site once the EPA is gone.
An EPA risk assessment last year found that the removal of a million cubic yards of dirt and building material from properties in Libby and neighboring Troy had significantly reduced asbestos exposure risks.
But scientists say exposure to even a minuscule amount of the material can cause lung problems. Vermiculite from the W.R. Grace mine was shipped out by rail for use as insulating material in millions of homes across the U.S.
Cleanup work on the highly-contaminated mine site and surrounding wooded areas of the Kootenai National Forest has barely begun. Those sites will be dealt with under a different plan, the EPA said.
Associated Press 2016