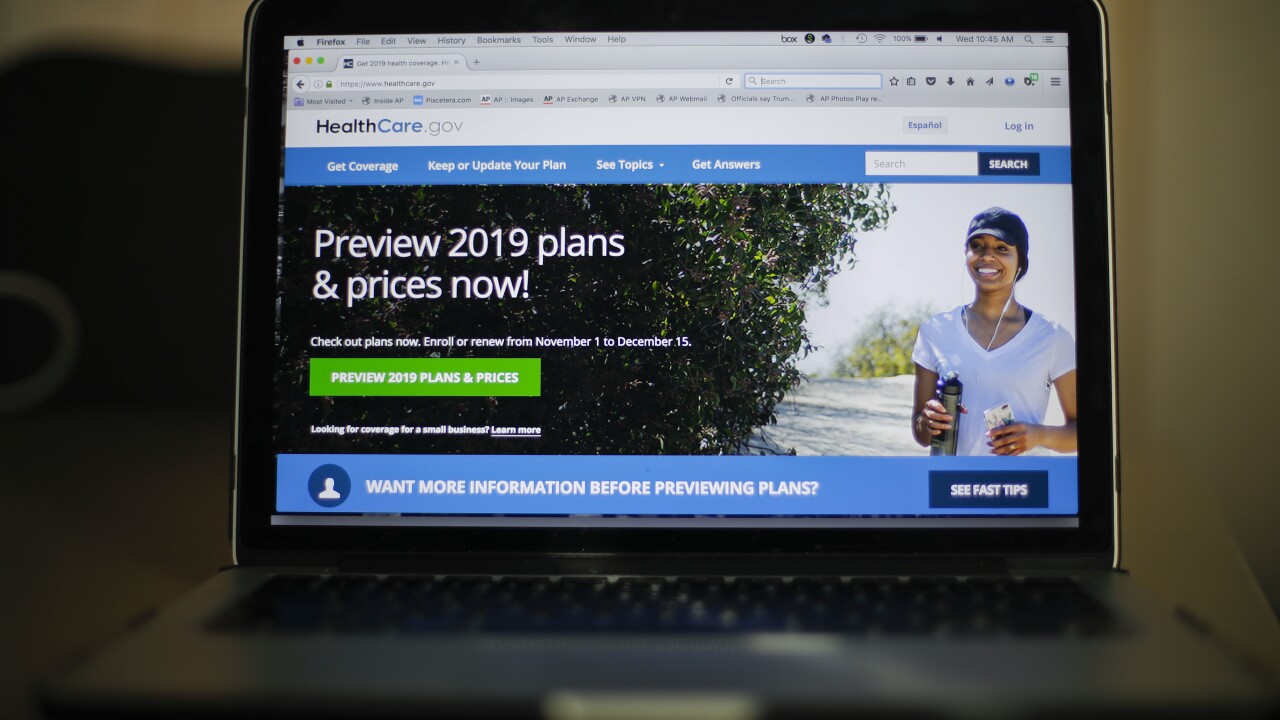 Pablo Martinez Monsivais/AP
The HealthCare.gov website is photographed in Washington, Wednesday, Oct. 31, 2018. Numbers released this week by the government show just a slight dip in people enrolled for Affordable Care Act coverage next year through HealthCare.gov. That’s the case even though the Republican-led Congress repealed fines for being uninsured effective Jan. 1. The drop _ from 8.8 million to 8.5 million _ was far less than experts forecast. (AP Photo/Pablo Martinez Monsivais)

The mandate directing individuals to obtain health insurance or face tax penalties ends on Tuesday for most, but not all Americans.

In Massachusetts, an individual mandate that has been on the books since 2006 will continue in the absence of the federal fines that had been in effect since 2014 under the Affordable Care Act but were eliminated as part of the Republican-backed tax reform law passed in 2017.

Most residents of New Jersey and the District of Columbia must also be covered or incur fines in 2019 after lawmakers, fearing widespread disruption in health insurance markets and sharply higher premiums, enacted laws replacing the federal mandate.

Vermont also approved an individual requirement that will take effect in 2020. Several other Democratic-leaning states are weighing similar moves, though in some cases officials may want to gauge how the repeal of penalties for being uninsured impacts rates and enrollment in ACA-compliant plans before deciding whether to act.

"The theory behind the mandate is that it buttresses protections for people with pre-existing conditions," said Stan Dorn, director of the National Center for Coverage Innovation at Families USA, a health care advocacy group. "Without an individual mandate, the concern is that healthy people can wait until they get sick before they sign up for coverage since insurance companies are now legally required to sell insurance to people with pre-existing conditions."

The individual mandate was among the more unpopular aspects of the law known as "Obamacare." Critics said forcing people to buy health coverage violated personal liberties and imposed financial hardships on individuals who cannot afford the cost of insurance.

Backers argued the mandate was needed to spread risk widely among people both sick and healthy. And they pointed out the ACA had key protections built in for those with lower incomes, including subsidized insurance plans and an expansion of the Medicaid program.

Government figures released in December showed the number of people enrolled in ACA coverage for 2019 through HealthCare.gov fell from 8.8 million to 8.5 million. But the drop was smaller than experts had forecast, suggesting the threat of fines may be a less decisive factor in personal insurance decisions than previously thought. Premiums have largely remained stable as well.

Massachusetts has achieved coverage rates as high as 97.5 percent since the health care overhaul signed by then-Republican Gov. Mitt Romney, which served as a model for the Affordable Care Act. The state mandate requires adults to carry insurance that meets a set of minimum standards and exempts people for whom available insurance options are deemed "unaffordable." The state tax penalty for noncompliance is generally set at half the lowest cost plan available to an individual through the state's health insurance marketplace.

"Massachusetts has led the way on keeping consumers covered on health insurance and part of that has been the individual mandate," said Hannah Frigand, an associate director of Health Care for All, a nonprofit that is helping state officials get the word out that coverage is still required despite the federal change.

In New Jersey, where about 800,000 residents have insurance through the ACA or expanded Medicaid, the 2019 individual mandate carries a penalty of 2.5 percent or $695 per taxpayer, whichever is greater. Democratic Gov. Phil Murphy announced in September that rates for the individual health insurance market would drop by an average 9.3 percent in 2019, attributing the decline to the state's new coverage mandate.

While efforts that began in several other states to develop an individual mandate later stalled, they could pick up again in the new year, advocates said.

Support was strong in Washington state, but as it has no income tax the state was left without a readily available method for enforcing a mandate. The Legislature asked a task force to develop other options for "state enforcement of the requirement to maintain minimum essential coverage."

Maryland, for example, has explored allowing uninsured residents use the money they would otherwise pay in tax penalties as down payments on plans purchased from the state's health insurance exchange.

"Rather than just saying, `you have to pay the penalty no matter what,' we can use this as an opportunity to get the uninsured to sign up for coverage right then and there," said Dorn.