A college student in Kansas won free Qdoba for a year. He gave it all to a homeless shelter 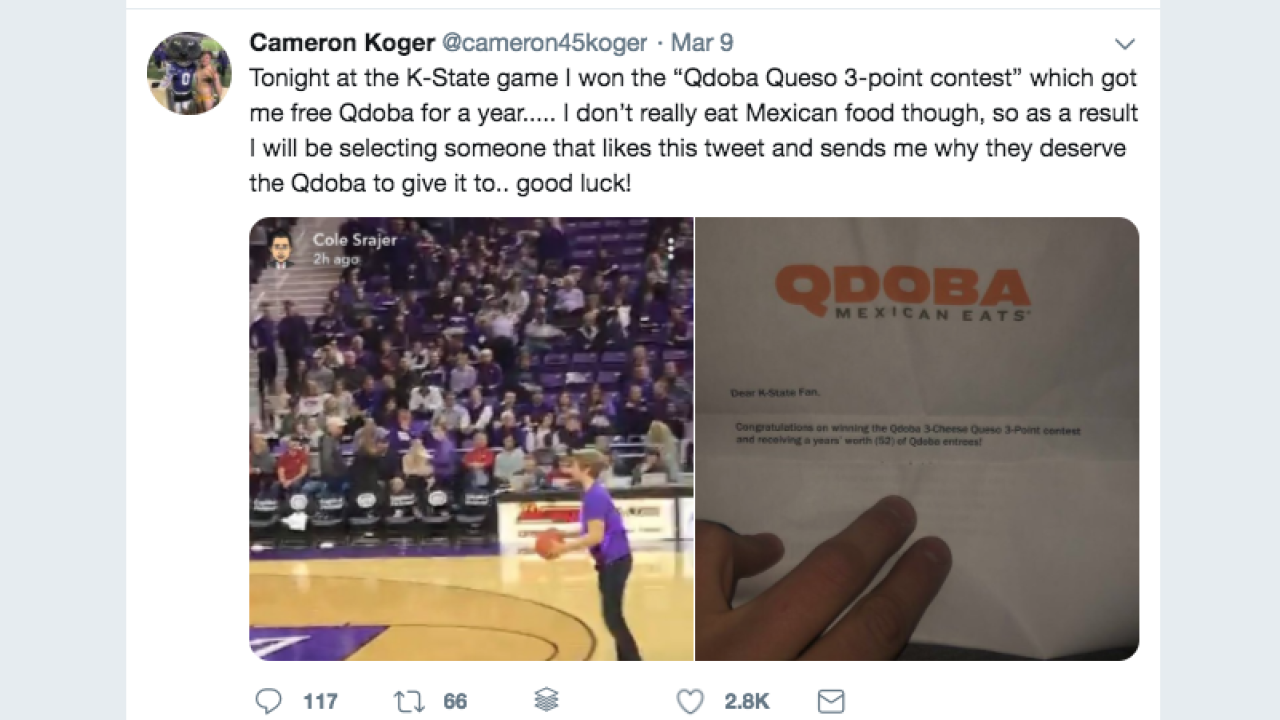 KANSAS CITY, Mo. — After winning a prize he (frankly) didn’t want, a Kansas State University student used it to make a difference in his community.

The K-State Collegian reported Cameron Koger, a freshman studying marketing, scored a three-pointer during a contest at the men’s basketball game against Oklahoma on March 9.

His prize was a year’s worth of entrees from Qdoba Mexican Eats.

Koger tweeted about the win, writing, “Tonight at the K-State game I won the ‘Qdoba Queso 3-point contest’ which got me free Qdoba for a year..... I don’t really eat Mexican food though, so as a result I will be selecting someone that likes this tweet and sends me why they deserve the Qdoba to give it to.. good luck!”

Koger received more than 100 public responses, one of which was from his mother.

Many people suggested Koger find a way to donate the prize, which is the equivalent of 52 entrees.

A few days later, Koger posted another tweet saying he’d reached out to the Manhattan Emergency Shelter in Manhattan, Kansas, about donating the voucher.

Koger said the shelter told him the 52 entrees would feed the entire shelter twice.

Koger continued on to say Riley County is the most food-insecure county in Kansas, and he wanted to make sure the meals would be put to good use locally.

Qdoba responded to his tweet, offering to double the amount of food (and then some) donated to the shelter.

"What a great gesture to donate your prize to a good cause. We want to do our part and DOUBLE the amount of food to provide even more meals to the Manhattan homeless shelter!” the company wrote.

In a post shared on Facebook, Manhattan Emergency Shelter wrote, “A huge thank you to Cameron Koger and Qdoba for thinking of us so selflessly!”