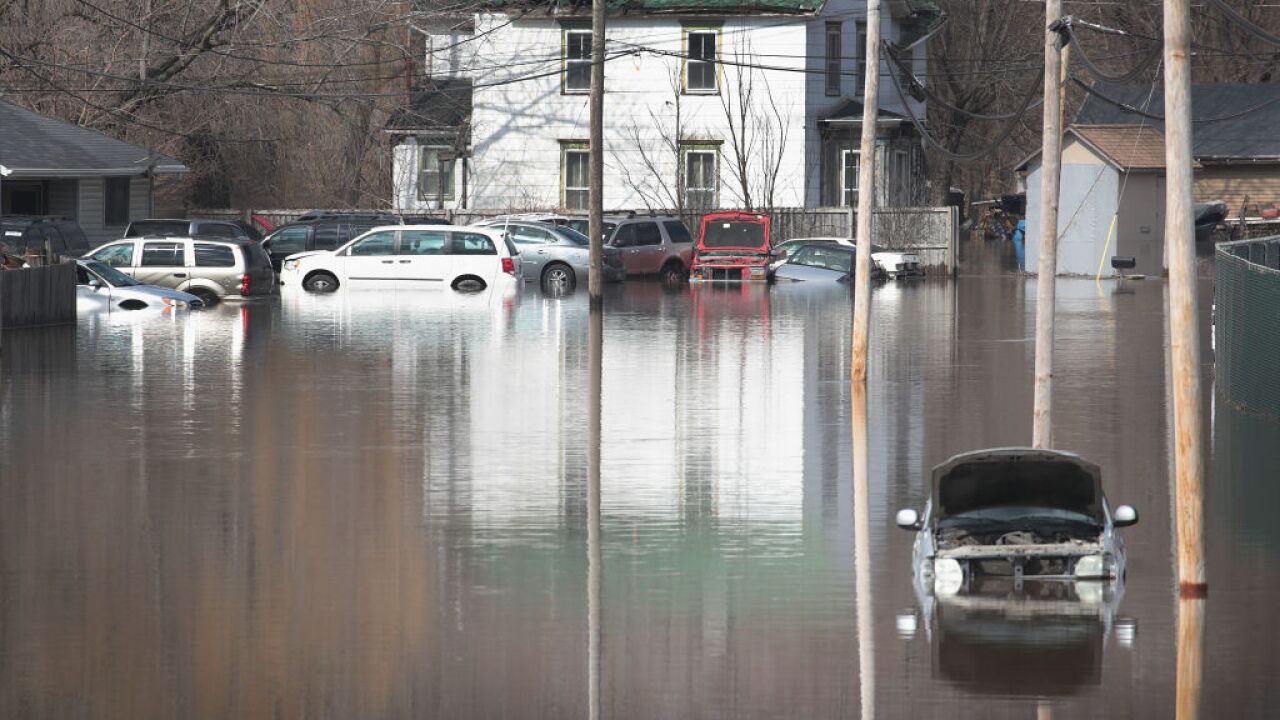 Vice President Mike Pence will travel to Nebraska Tuesday to tour communities devastated by record-breaking flooding that is expected to continue throughout the week.

At least four people, three in Nebraska and one in Iowa, have died in the flooding.

Cities across the Midwest are expected to see more rising water this week, CNN meteorologist Michael Guy said. There will be some showers from Iowa to Mississippi, but they won't impact the flooding, Guy said. Meanwhile, rivers will continue to crest this week and next, with cities including Omaha heavily impacted by cresting, Guy said. A crest is the highest point of a flood wave.

Rivers began rising last week following a "bomb cyclone" that stormed over the central US with hurricane-like winds and blizzard conditions. That snow and melting ice ended up in rivers and streams, causing flooding and damage after the storm was over.

More than 8 million people in 14 states from Minnesota to the Gulf of Mexico are under a flood warning, Guy said.

Nebraska , Iowa and Wisconsin have all declared a state of emergency.

"Many residents and communities across our state have been responding to flooding that has impacted homes, businesses, and cities and towns across Wisconsin," Gov. Tony Evers said. "The warm temperatures and rain the last few days have caused much of the heavy snowpack and ice to melt resulting in flooding, ice jams, and river sand creeks to rise."

Seventy-four cities, 65 counties and four tribal areas have issued emergency declarations in Nebraska. Flood records have been shattered in 17 places across the state and rivers will likely break more cresting records this week, according to the Nebraska Emergency Management Agency (NEMA).

Nebraska Gov. Pete Ricketts called the flooding the "most widespread disaster we have had in our state's history."

On Monday, Lincoln Mayor Chris Beutler requested a disaster declaration from the governor, after the flooding left 284,000 residents in his city under restricted water usage.

The Nebraska Department of Health and Human Services also warned the flooding may have contaminated private water supplies, adding wells should be tested to ensure safety.

"Cloudiness or a change in taste or smell are signs of possible contamination," administrator of the DHHS Drinking Water Program Sue Dempsey said. "If there is any indication that the water supply has been breached by flood waters, even without noticeable changes in taste or smell, I encourage residents to get a water sample kit for testing."

Nebraskan James Wilke, a farmer in Platte County received a call to go help rescue a person trapped in a vehicle, according to NEMA spokesman Mike Wight.

"With the guidance of emergency responders, James drove his tractor over the Shell Creek bridge on the Monestary Road and the bridge gave out. James and the tractor went down into the floodwater below," family friend Jodi L. Hefti wrote on Facebook.

Another Nebraska man died after he was overcome by floodwaters near a dam in Spencer, Wight said.

The Platte County Sheriff's Department also confirmed the death of 80-year-old Betty Hamernik who was trapped in her home as the water rose. By the time rescuers got to her, the department said, she was dead. Hamernik's cause of death has not been determined and remains under investigation.

In Iowa, Aleido Rojas Galan of Nebraska was one of three people rescued from floodwater, Iowa's Fremont County Sheriff's Office said. But Galan, 55, succumbed to his injuries and died at a hospital in Lincoln.

NEMA Assistant Director Bryan Tuma said the Red Cross is so far operating nine shelters, which are housing more than 470 individuals. Twenty-nine counties had mandatory or voluntary evacuations, 18 of which have now allowed their residents to return.

Meanwhile, Nebraska has already seen a $205 million impact on its public sector from the floods, NEMA said. The state's private sector has seen a $60 million impact.

Ricketts said Monday the state has been working with the Federal Emergency Management Agency and other federal officials "to get emergency disaster declaration declared, and tap into those federal resources for public assistance and individual assistance."

As the recovery process begins, NEMA urged residents to keep looking out for loved ones and neighbors.

Warning signs include: increased use of alcohol, tobacco or other drugs; feelings of anxiety, disbelief or numbness; physical reactions such as headaches; and the worsening of chronic health problems.