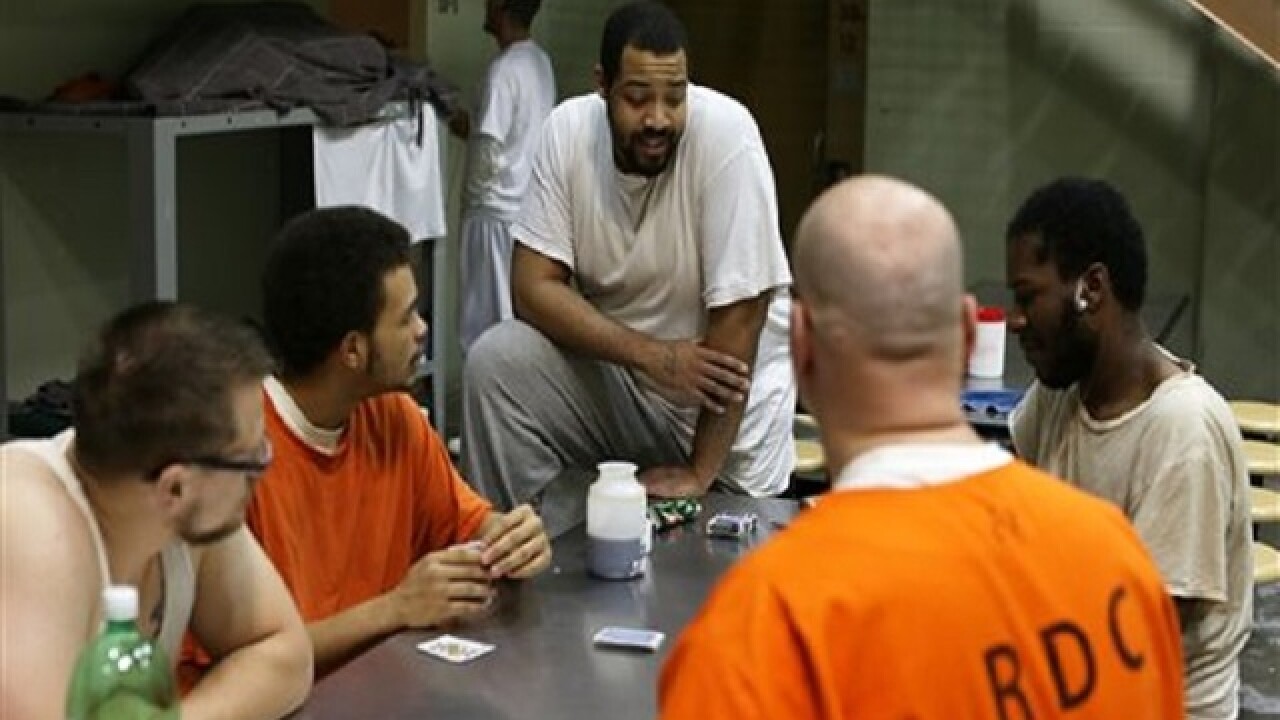 <p>This image released by A&E Networks shows a scene from "60 Days In," a 12-episode series about a group of innocent civilians who spent two months in an Indiana jail. The series premieres with a double episode on March 10 on A&E. (A&E Networks via AP)</p>

NEW YORK (AP) — Seven innocent civilians agreed to spend two months in an Indiana jail and have their experiences filmed for an A&E Network series, "60 Days In," that will air starting next month.
Backgrounds of the fake inmates, whose jail time ended in December, were kept from both corrections officers and real inmates at the Clark County Jail in Jeffersonville, Indiana. Even though one of the participants dropped out after being punched by an inmate, the show's producer and Clark County Sheriff Jamey Noel said Wednesday that the stunt was worth the risk.
"We wanted to create a show that really shows what it is like to do time, from a perspective that hadn't been seen before," said Gregory Henry, executive producer for the Lucky 8 TV production company.
The 12-episode series begins 9 p.m. EST Thursday, March 10, with two back-to-back episodes, then moves to 10 p.m. EST starting March 17.
The civilians all had their reasons for participating. One woman was a social worker hoping to put an end to gang violence, one was an ex-Marine who thought the experience would help him become a DEA agent, one was a teacher who wanted to tell students where bad choices can lead them, and one young man wanted to get a sense of what his jailed brother was going through.
Hundreds of cameras followed them. Inmates and guards were told producers were filming a series about the experiences of first-time prisoners, leaving out the detail that they weren't real prisoners.
"The whole program was kind of hidden in plain sight," Henry said.
Participants received counseling and training in advance and were watched constantly. They had a safe phrase — "I really miss the coffee" — and a visual cue of putting a towel on their heads that signaled to producers that they wanted to be removed from a potentially dangerous situation.
"I've never been able to see the moment when the slammer door shuts and someone is standing alone in a pod realizing what they had gotten themselves into," Henry said. "It was very real for everybody."
Noel, who took office last year, said he was trying to clean up a 500-inmate jail where drugs seemed more available than they were on the streets. He considered bringing undercover police officers into the facility to provide intelligence of what was really going on but couldn't get anyone to commit to a stay beyond two or three days.
The fake inmates helped provide a mother lode of information that Noel and his colleagues said they're still sifting through, like how contraband weapons were made. Shortly after they got in, new inmates were told by longtime inmates that they wouldn't be permitted to use the bathroom safely unless they paid some sort of bribe.
"We learned stuff that the most experienced corrections officer we had never knew was going on," Noel said.
To him, that made the program worth the risk of the bad publicity that could have resulted if something went terribly wrong for one of the inmate impersonators.
"Normal people that have never gotten in trouble before are going to be blown away by what goes on in a jail," he said. "I hope it is a real deterrent for them."
Associated Press 2016