6 questions the jury has had in the Bill Cosby trial 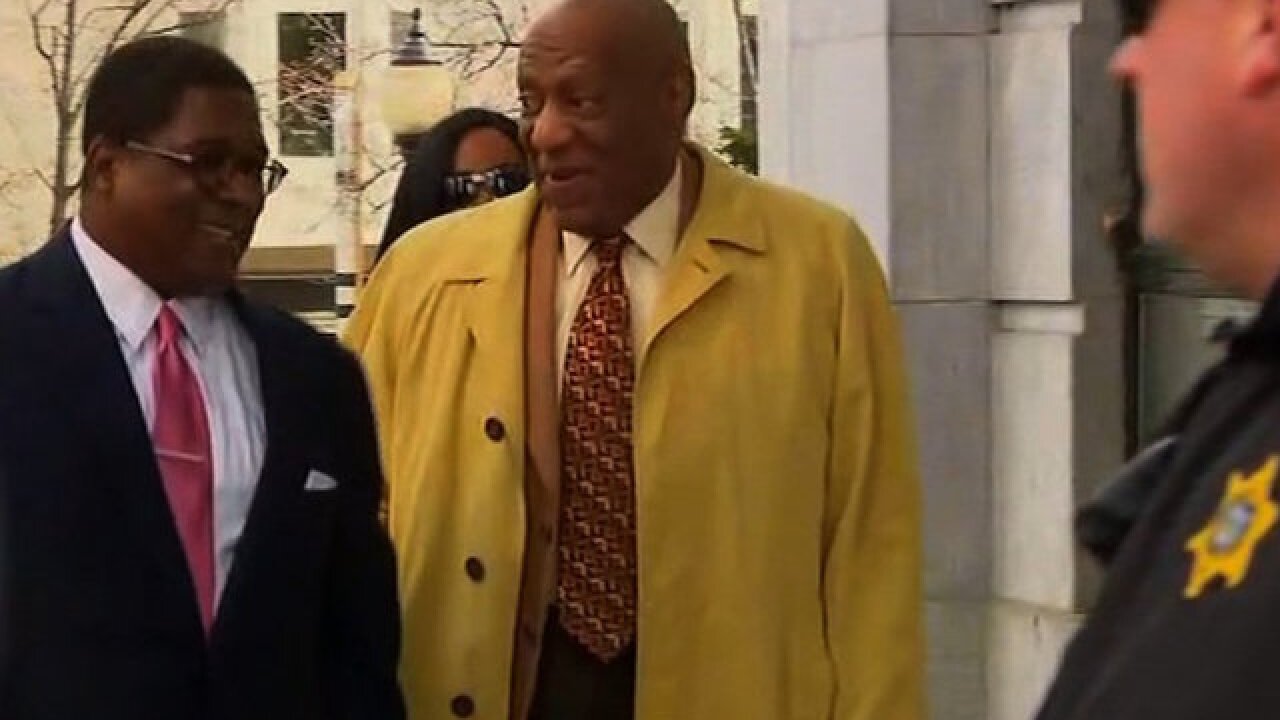 © 2017 Cable News Network, Inc.
CNN
<p>Weeks before his criminal trial begins, Bill Cosby gave a rare interview to a radio host, which will air Tuesday, May 16, 2017, saying racism and "nefarious" motivations could be behind the allegations against him.</p>

NORRISTOWN, Pennsylvania (CNN) -- During 28 hours of deliberations so far, the jurors in Bill Cosby's assault trial have asked six questions.

Two of them pertain to wanting to review what Cosby said and another two are about the testimony of his accuser, Andrea Constand. The jurors also asked the court to define a phrase in one of the charges, and to rehear what a police detective had testified to about his talk with Cosby.

Cosby is accused of drugging and assaulting Constand, who was then the director of operations for Temple University's women's basketball team. She says the incident happened at Cosby's home near Philadelphia in January 2004.

The comedian faces three charges of aggravated indecent assault. If found guilty, he could face up to 10 years in prison for each charge.

Cosby, 79, pleaded not guilty to the three counts.

When the trial started in June 5, the jury of seven men and five women were bused in from Allegheny County near Pittsburgh and have since been sequestered in a hotel.

These are the six questions the jury asked:

Question 1: Can we see in Mr. Cosby's testimony the part where he called the pills his "friends?" We need to see the whole context.

The jurors asked for a reading of part of Cosby's deposition from more than a decade ago in which he described giving pills to Constand on the night of the alleged sexual assault in 2004.

The drugs he gave Constand were over-the-counter Benadryl, he had said. Cosby had called the pills "friends."

"'I have three friends for you to make you relax,'" Cosby said, recalling during the deposition what he'd told Constand.

Constand reported the incident to police in 2005, a year after the alleged incident. At the time, the district attorney declined to press charges, citing insufficient evidence.

Constand sued in civil court, and Cosby provided a sworn deposition in which he said he had engaged in consensual sexual activity with Constand -- and that he had obtained Quaaludes in order to give them to women with whom he wanted to have sex.

That civil suit was settled in 2006, and the Cosby deposition was sealed until 2015. The unsealed deposition was central to Cosby's ongoing criminal case.

Commonwealth exhibits 27 through 43 comprise a wider portion of Cosby's deposition from more than a decade ago.

Among the topics covered in these portions of the deposition:

-- How Cosby met Constand, and when he developed a romantic interest in her.

-- Cosby's description of what he says was a romantic encounter with Constand before the night of the alleged assault.

-- Cosby's description of what he says happened on the night of the alleged assault. That includes all the testimony covered in Question 1.

Question 3: Will you please define what it means in count 3 "without her knowledge?"

The jury asked the court to define the phrase "without her knowledge" in the third count of the aggravated indecent assault charge against Cosby.

Judge Steven O'Neill said the jury had the written charge in its possession and that he is not permitted to define the charges any further, saying it was up to the jury to determine what the phrase means.

The third count accuses Cosby of impairing Constand "by administering drugs, intoxicants or other means for the purpose of preventing resistance."

O'Neill offered to read the written charge, but the jury didn't take him up on it.

Question 4: Can we see the initial report to the Durham Police or what the court reporter recorded of that interview of Andrea Constand?

Canadian detective Dave Mason of Durham Regional Police took down the report on Constand's sexual offense claim in January 2005. She made the report in her home province of Ontario, Canada.

Last week, Mason testified in court about his interview with Constand.

According to Mason, Constand said she had gone to Cosby's house after dinner in mid-January 2004.

When they were alone in the kitchen, he offered a few blue pills to help her with tension, Mason testified recalling his interview.

Shortly afterward she began feeling dizzy and said her legs were like "jelly," Mason said. She said after she started experiencing those effects, Cosby escorted her to a sitting room, he testified.

Mason said Constand didn't recall much after that and said that Cosby lied next to her and assaulted her.

Question 5: 'Can we hear/see the testimony of Andrea Constand from the night of the incident? (On the witness stand)

Constand had testified over two days last week for the prosecution and had spoken about the night of the alleged indecent assault by Cosby.

The court reporter read back that part of her testimony.

Constand alleged that Cosby gave her three blue pills that he said were herbal and would help her relax.

"Put them down, they're your friends. They'll take the edge off," Cosby told her, she testified.

She became incapacitated and felt "frozen" and told him so, Constand testified. Cosby then placed her on the couch and sexually assaulted her without her consent, she had said.

Question 6: Can we hear the Richard Schaffer testimony about his talk with Mr. Cosby?

Sgt. Richard Schaffer with the Cheltenham Township County police department testified last week about a January 2005 interview he had with Cosby about the alleged assault.

That interview occurred in the presence of Cosby's lawyers in New York City.

In court, Schaffer read aloud Cosby's statements from that interview.

During his interview with law enforcement, Cosby said that he gave Benadryl to Constand.

In response to the jury's sixth question, Schaffer's entire testimony had to be transcribed by the court reporter, which she read back to the jury. The reading took nearly an hour on Wednesday.