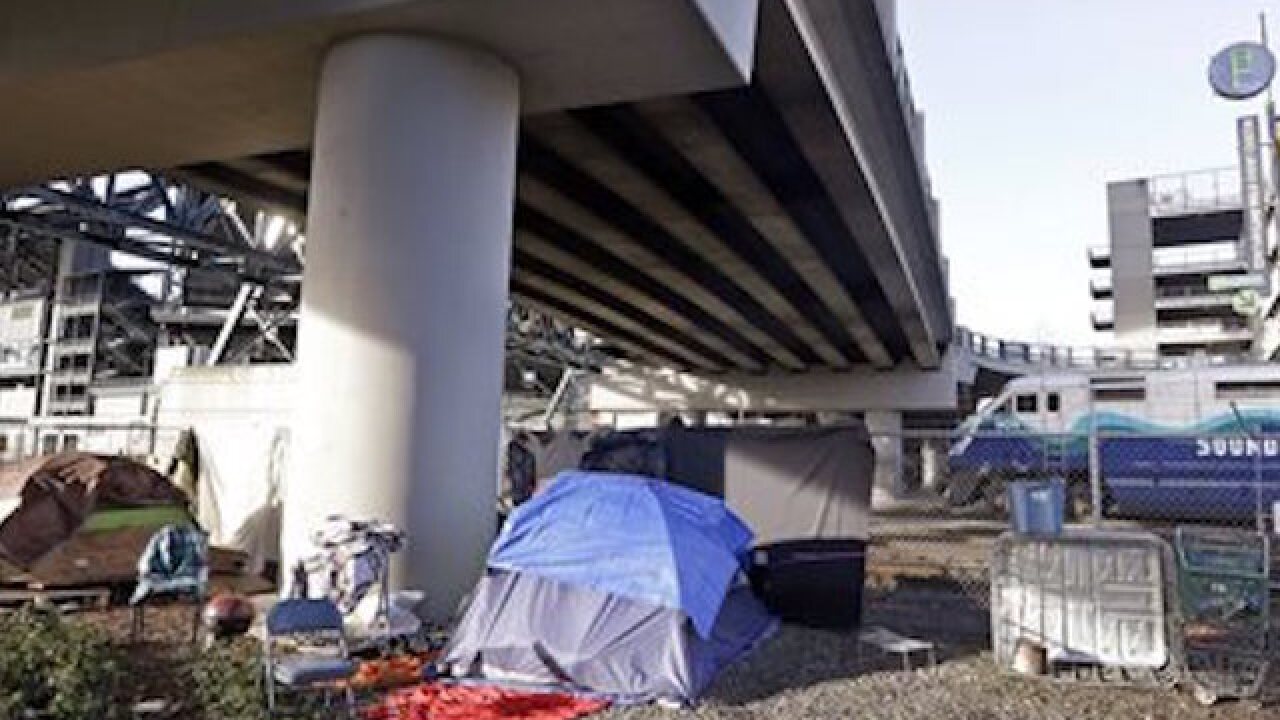 Copyright Associated Press
Elaine Thompson
<p>Tents sit under an overpass in view of sports stadiums behind as a commuter train passes near where police arrested three teenage boys the day before in connection with a January shooting at a Seattle homeless encampment known as 'The Jungle' that left 2 people dead and three others wounded, Tuesday, Feb. 2, 2016, in Seattle. (AP Photo/Elaine Thompson)</p>

SEATTLE (AP) — Three teen brothers are suspected in a drug-related shooting that left two people dead and three wounded at a well-known Seattle homeless camp, a crime that comes as the city struggles with a surge of people living on the streets.

The suspects — ages 13, 16 and 17 — were arrested Monday in what police have described as a targeted shooting at the longstanding encampment known as the Jungle, about a mile from downtown.

A judge on Tuesday found probable cause to hold the brothers on investigation of felony murder, assault and firearms violations. The teens are homeless and reportedly lived in tents with their mother near the camp where the slayings occurred, a Seattle police detective wrote in a probable cause statement. Only the oldest teen appeared in King County Juvenile Court. The others waived their court appearances through their attorneys.

Police believe the Jan. 26 killings stemmed from a low-level drug deal and that the suspects and victims knew each other or knew of each other. According to the probable cause statement, the teens reportedly told an informant that one of the victims "owed their mother 500.00 dollars from a drug deal and they went to collect for her." One teen also reportedly told a witness that he took about heroin and cash.

Katherine Hurley, a lawyer representing the 13-year-old boy, said after Tuesday's court hearing that there is limited information at this time, and "it's important that we don't jump to conclusions in this very tragic situation."

It comes at a time when the region has seen an increase in its homeless population. Murray and King County Executive Dow Constantine declared emergencies in the fall, calling the situation a crisis and investing new money.

The number of people living on the street or in their cars in Seattle and the county of nearly 2.1 million people jumped to more than 4,500, a 19 percent increase from last year, according to a one-night annual survey conducted Friday. In 2015, there were about 10,100 homeless people living in the Seattle and King County area, ranking it third among major cities, according to a report by the U.S. Department of Housing and Urban Development

Murray had just finished delivering a live address on the city's homeless issue when he learned of the shooting Jan. 26. "We are involved in a homeless crisis, the like that we have not seen since the Great Depression," he said that night.

Last year, the City Council authorized three city-sanctioned homeless encampments, known as "tent cities," to provide a safer place for those without shelter.

This month, the council and mayor announced Seattle will open two parking lots in neighborhoods so those living in RVs and vehicles can safely park.

The "safe lots" will hold about 50 vehicles and have sanitation and garbage service, as well as social services. They are slated to open in the coming weeks.

Some residents have criticized the city actions, saying they provide no permanent solutions to the homeless problem. Others have complained of increased human waste, trash and criminal activity at the encampments and worry about crime and other problems at the lots.

The homeless camp known as the Jungle, underneath and along Interstate 5, has been "unmanageable and out of control for almost two decades," Murray said last week.

Tents pitched under the freeway overpass and along the greenbelt are visible from I-5, and have long been a presence there.

It's one of dozens of unauthorized homeless encampments that have popped up on vacant land, along freeways and in neighborhoods throughout Seattle. In the past three months, the city has identified about 134 such encampments, some with one or two tents and others with more.

The two people killed at the Jungle have been identified as Jeannine L. Zapata, 45, and James Q. Tran, 33. Both died of gunshot wounds.

The other victims include a 46-year-old man, his 47-year-old girlfriend and another 41-year-old woman, according to court documents. One man and woman remained hospitalized Monday in satisfactory condition, according to Harborview Medical Center spokeswoman Susan Gregg. The other woman wanted to keep her condition private, Gregg said. It was listed as satisfactory last week.

Detectives worked around the clock to identify the suspects, searching a vehicle and numerous other scenes, Seattle Police Chief Kathleen O'Toole said Monday.

Investigators believe at least two of the suspects fired weapons that night. Police recovered one gun during the investigation. They do not believe there are other suspects.

City officials are continuing their assessment of the Jungle to determine what should be done there, O'Toole said.