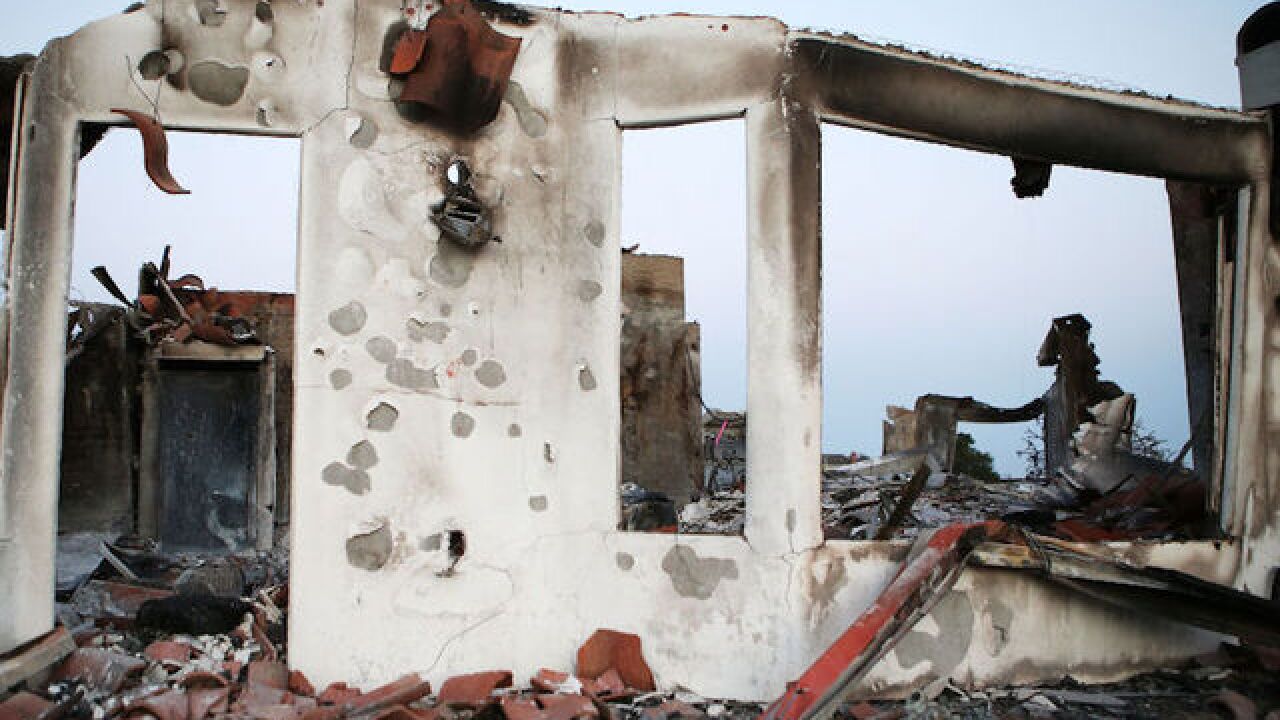 Image copyright 2018 Getty Images. All rights reserved. This material may not be published, broadcast, rewritten, or redistributed.
Mario Tama
<p>The charred remains of a destroyed home stand in the aftermath of the Holiday Fire on July 7, 2018 in Goleta, California. The fire destroyed a number of homes in the community during an intense heat wave which broke various records across Southern California.</p>

Eric Durtschi and his family moved to Santa Barbara County two weeks ago. Their home is now a dusty pile of ash and mangled metal, torched by a fast-moving fire in Southern California.

"It's really hard to see. We saw it burning live on TV," he told CNN affiliate KTLA.

The family was watching a movie Friday night when their daughter smelled smoke. The Holiday fire -- one of nearly a dozen wildfires ravaging the western United States -- was quickly approaching.

Durtschi's home was among 20 structures destroyed by the fire weeks after he moved from Idaho.

"We have six kids, and I want them to know this isn't the end," Durtschi said. "It's fine, we're all alive."

Just last year, a wildfire roared through the region followed by fatal mudslides.

The rapidly spreading fire has burned through 100 acres in Goleta and is 80% contained.

About 2,500 people were initially forced out of their homes when authorities ordered mandatory evacuations, but most were allowed to return Saturday. The record heat that fueled wildfires in California improved slightly Saturday, giving firefighters a break.

A heat wave will continue bringing triple digit temperatures to California on Sunday, but some areas will be "noticeably cooler" with temperatures in the 90s, the National Weather Service said.

In addition to fueling wildfires, the heatwave left thousands without power in Los Angeles on Saturday due to high electricity demand.

Blaze near border with Oregon

Another fire burning near the California-Oregon line, known as the Klamathon Fire, has left one person dead. It grew to 22,000 acres Saturday, but conditions helped firefighters reach a 20 percent containment, officials said.

"When the humidity goes up, the fire burns less intently. That gives us the opportunity to get in there and make some really good headway," spokesman Jeff LaRusso of Cal Fire told CNN affiliate KTVL.

Ray Chaner quickly put to work hoses and sprinklers when another California blaze, the West Fire, threatened his home.

The retired Cal Fire firefighter rushed home when his wife called, saying she spotted flames nearby.

"Got water on the fire. Got water on my house. Checked my neighbor's house," he told CNN affiliate KSWB.

The blaze has scorched 504 acres in San Diego County and destroyed 18 structures, including several homes.

Carol Beaty found piles of ash and rubble when she returned home after evacuating.

"We have nothing, I mean there's nothing salvageable here," Beaty told KSWB.

The fire was about 81 percent contained Saturday, but left behind a trail of burned cars and homes.