'A shared grief:' A city honors the victims of the limo crash over 4 days of funerals 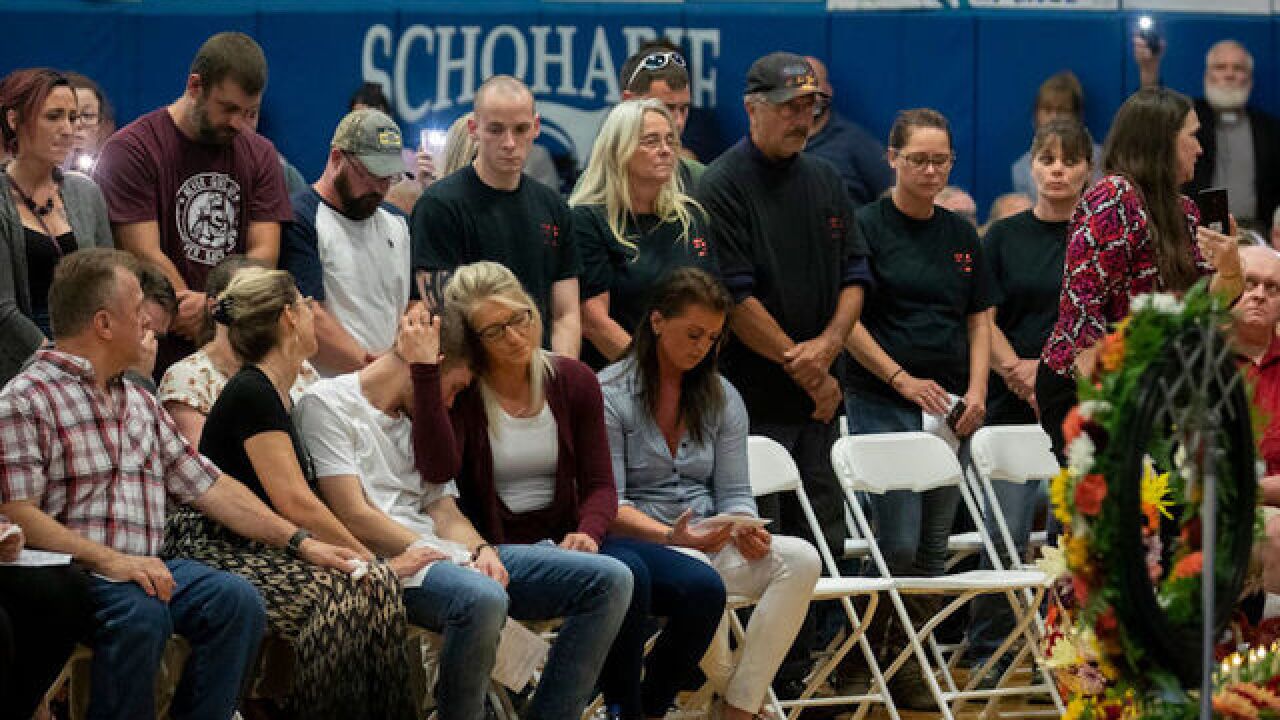 Image copyright 2018 Getty Images. All rights reserved. This material may not be published, broadcast, rewritten, or redistributed.
Drew Angerer
<p>Family members who lost loved ones become emotional as names of the victims are read aloud during a memorial service for victims of a limousine crash that killed 20 people, at Schoharie County High School, October 10, 2018 in Schoharie, New York. 20 people died in the crash on Saturday, including the driver of the limo, 17 passengers, and two pedestrians. The community will gathered on Wednesday evening for a memorial vigil at the local high school. </p>

A long line of people stretched down the street and around a corner in Amsterdam, New York, Friday evening as mourners waited to to enter St. Stanislaus Roman Catholic Church.

They wanted to honor the lives of eight people -- four of them sisters -- who died in last weekend's devastating limousine crash.

"Nobody cared how cold it was," said Christopher Carpenter, a resident who attended the gathering and knew one of the victims, Abigail Jackson. "The wind was blowing. It was overcast, and everybody still stayed in that line to go through the church."

As they entered, attendees extended their condolences to the families of Abigail and Adam Jackson, Mary and Robert Dyson, Amy and Axel Steenburg, Allison King and Richard Steenburg. And the families greeted each person who came, Carpenter said.

Residents said that is typical of Amsterdam, a city of about 20,000 that straddles the Mohawk River. It's where 11 of the 20 victims in the crash were expected to be honored and laid to rest over four emotional days between Friday and Monday.

The city is densely populated, Carpenter said, and it seems nearly everyone had a personal connection to someone who died.

Residents who spoke to CNN described a collective sense of grief over the people killed, but also a collective resolve to lift up their families.

"I think what's so upsetting, and what brought everybody together, is everybody in town kind of knows one another," said Rev. Jeffrey L'Arche of St. Mary's Catholic Church, where three of this weekend's services — for Patrick Cushing and newlyweds Shane and Erin McGowan -- were to take place.

The close-knit group of friends was bound for a birthday celebration at a brewery last weekend when the stretch limousine they were in plowed through a stop sign and collided with a parked SUV in Schoharie. All 18 people inside the vehicle, including the driver, were killed. So were two pedestrians.

It was the deadliest transportation accident in the U.S. in nearly a decade.

But for the people of Amsterdam, the greater tragedy is that those who died were their neighbors, their family members, their friends. They were young parents, newlyweds, brothers and sisters, a teacher, an athlete and an aspiring law student.

"Everybody has a story about these people," L'Arche said, "because everybody knew them."

He told CNN he'd gotten to know the McGowans before he officiated their wedding in June.

"They were a delightful couple," he told CNN, adding they were "very much in love with one another."

"They lived their vows as they said that they would in this church three months ago -- 'Til death do us part.'"

A spreading 'wave of light'

Last Monday, two days after the accident, people gathered at a pedestrian bridge for a candlelight vigil organized by Carpenter and scores of others. Local restaurants provided food, while the American Red Cross gave out hot beverages and blankets. Local funeral homes donated thousands of candles.

Carpenter said he was amazed by all the cooperation and willingness to help. So many people offered to help in one way or another that he wasn't able to call everyone back.

At the vigil, the community heard from local officials and a pastor. As a singer belted out "Amazing Grace," Carpenter watched a "wave of light" spread through the crowd as mourners lit candles one by one.

"It was overwhelming to see the love and compassion and understanding from every resident that was down there," he said. "I wept."

"You could just feel through the air there was kind of like solidarity, a sympathy and empathy that I've rarely experienced in any kind of thing like that," L'Arche said. "I think it was kind of a shared grief."

That shared grief showed itself in many ways throughout the Amsterdam area over the last week.

Diane Madej, a coordinator for Faith Formation, a Catholic education program in Amsterdam, described a "ripple effect," felt even by those like herself who didn't know the victims personally.

"The impact is enormous," Madej said. She described how a girls' swim team from Amsterdam was greeted at a meet by cookies, and how a volleyball team's opponents gave them carnations and held a moment of silence "in solidarity," with them.

Students at St. Mary's Institute, a Catholic school, placed 20 candles on the altar in their chapel to honor each victim, Madej said.

The school district also honored Abigail and Adam Jackson at a football game on Friday, CNN affiliate WRGB reported. Abigail was a teacher in the district, and Adam played football at Amsterdam High School as a teenager.

There was a moment of silence. Flags flew at half-staff. Some people wore shirts emblazoned with the words, "Amsterdam Strong." At halftime, Adam's niece was honored with his jersey, bearing the number 58, according to WRGB.

Madej said she reminded the students in her program and their families to lean on their faith and to pray for the victims and their loved ones. But many, she said, just need to talk and verbalize their grief or anger.

"You get frustrated, because you feel like there's nothing else you can do," she said. "But we can always pray."

'Things are not the same now'

Amsterdam is working through its pain. And the community recognizes it has a role to play in supporting the heartbroken families.

"It doesn't just end after the funeral services this weekend," Madej said. "We need to help those families move on, find a way to get through this."

L'Arche said one of the most difficult periods after a death comes after the funeral ends and people head home, leaving the survivors on their own.

"That can be a very lonely time," he said, "because there was a lot of attention, and all of a sudden, here we are, sitting in a house by ourselves now. And that's really where for many people it kind of dawns on them: Things are not the same now."

L'Arche emphasized the importance of being present and available for the families -- both for himself as a clergyman, but also for people in Amsterdam who might know them.

"I think just the presence — your presence is important," he said. "You don't have to say an awful lot. As a matter of fact, the less you say, the better."

Carpenter said he's sure Amsterdam will do whatever it can to support the families in the grieving process. "We all believe you need to take care of your neighbor," he said, "and treat everyone with kindness and care."

But he also emphasized the families' strength and resiliency, which he said was exhibited during Friday night's gathering at St. Stanislaus.

"You could see the pain on their faces, obviously," he said. "But I bet you the families stood there for five to six hours, just to make sure that the people that came in that church knew that (the family) cared that they came to that church."

"We all wanted to show the families of the victims that no matter what, we love their children," Carpenter added. "We have love in our hearts for them, and we will do whatever we can to make sure that they're remembered and honored for the rest of their days."