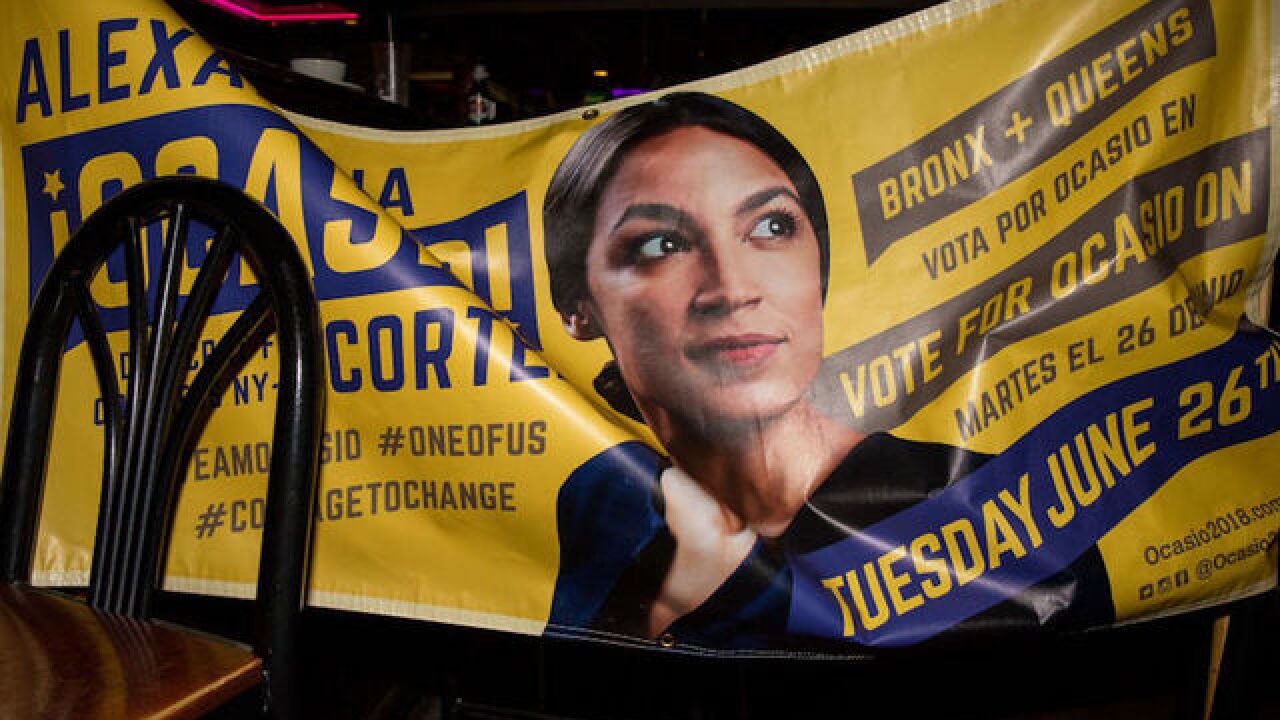 Image copyright 2018 Getty Images. All rights reserved. This material may not be published, broadcast, rewritten, or redistributed.
Scott Heins
<p>A banner for progressive challenger Alexandria Ocasio-Cortez hangs across chairs at her victory party in the Bronx after an upset against incumbent Democratic Representative Joseph Crowly on June 26, 2018 in New York City. Ocasio-Cortez upset Rep. Joseph Crowley in New York‚Äôs 14th Congressional District, which includes parts of the Bronx and Queens. </p>

If a progressive war against the Democratic establishment is coming, Tuesday's primaries were the first shots fired.

The soul searching within the Democratic Party that, to date, had played out largely on the sidelines was thrust into the spotlight on Tuesday in a series of primaries that amounted to arguably the best night for progressives this year.

But it wasn't their only victory.

Until now, there had been few signs of a mounting progressive insurgency. Kara Eastman had defeated former Rep. Brad Ashford in a Nebraska Democratic congressional primary, and Democratic socialists had won down-ballot races in Pennsylvania and elsewhere. But progressives declined to challenge the party's sitting senators and in the most important election of 2017 -- the Virginia governor's race -- Lt. Gov. Ralph Northam defeated his more liberal primary opponent, former Rep. Tom Perriello.

Now, though, Ocasio-Cortez's victory could embolden liberal challengers in both 2018 and 2020.

All of this played out at the same time that President Donald Trump demonstrated that the White House's bully pulpit, especially in Republican primaries, still carries considerable weight.

It wasn't all good news for Trump, however: Mitt Romney, a Trump foil and Republican heavyweight, moved one step closer to Washington -- and a powerful perch to pester the President.

Here are our five key takeaways from a shocking primary night:

A shocker in Queens

The out-of-nowhere upset of Crowley, the fourth-ranking Democrat in the House, in Tuesday's New York primary stunned the Democratic establishment, shook up the party's line of succession to become the next House speaker and might even be an early sign of a mounting progressive insurgency -- potentially with major ramifications in 2020.

Crowley was ousted from his Queens district by Democratic socialist Ocasio-Cortez, a 28-year-old Latina running her first political campaign. She is now likely to be the youngest woman ever elected to the House.

It was the most shocking result of 2018's political season so far, and could signal a restive base as the 2020 presidential primary approaches. Crowley is the only Democratic incumbent so far to lose his seat in a primary this year.

Ocasio-Cortez won despite being wildly outspent by Crowley, who leaned on his Democratic contacts to raise $3.3 million compared to her roughly $300,000.

Crowley quickly conceded and backed Ocasio-Cortez, who said in her victory speech that "what we proved tonight is that sometimes the deep midnight and darkness that it feels in our political environment, that there is still hope for this nation."

Donald Trump gets his men

The same night Democrats were delivered an earth-shattering blow, Trump's power as President was validated.

In two key races -- one for governor of South Carolina and another for a New York House seat -- the candidate Trump backed made it into the general election, riding the President's backing to victory with base Republicans voters.

Trump's intervention was needed for two incumbent Republicans -- Gov. Henry McMaster in South Carolina and Rep. Dan Donovan -- both of whom were fending off insurgent challenges.

But, in the end, McMaster outlasted Republican John Warren in the South Carolina runoff and Donovan in New York easily beat former congressman Michael Grimm, who was fighting to win back his old seat.

"Congratulations to Governor Henry McMaster on your BIG election win! South Carolina loves you," he added on the governor's race. "We are all proud of you and Peggy!"

Questions about Trump's endorsement power remain -- several candidates the President has backed have failed to win -- but Tuesday was a good night for the President.

Romney has run in Utah as both a friend and a foe to Trump, promising to stand with the President when it helps the people of Utah and opposing him when it does not.

"I do not make this a daily commentary," Romney wrote in the Salt Lake Tribune during the campaign. "I express contrary views only when I believe it is a matter of substantial significance."

And he has tried to live that, most recently with the President's plan to separate children from their families at the US-Mexico border.

Trump ignored their checkered relationship on Tuesday night, congratulating the former governor on a "big and conclusive win."

"I look forward to working together - there is so much good to do," he wrote on Twitter. "A great and loving family will be coming to D.C."

Jealous could become Maryland's first African American governor if he wins in November, but Hogan's popularity has soared since he was elected four years ago, landing him among the most popular governors in America.

"Ben Jealous is the right candidate to win back Maryland for the Democrats, and the DGA looks forward to working with him to do so," Democratic Governors Association chair Jay Inslee said in a statement.

As The Beatles once sang, "money can't buy me love."

But, on Tuesday night, Democrat David Trone proved it can help land you a run at a House seat.

Trone, who spent $13 million and lost to now Rep. Jamie Raskin in 2016, won the Democratic primary in Maryland's Sixth District on Tuesday after spending more than $10 million of his own fortune.

It's a lot of money, but the co-owner of the retail chain Total Wine & More has his shot at winning the solidly Democratic seat in November.