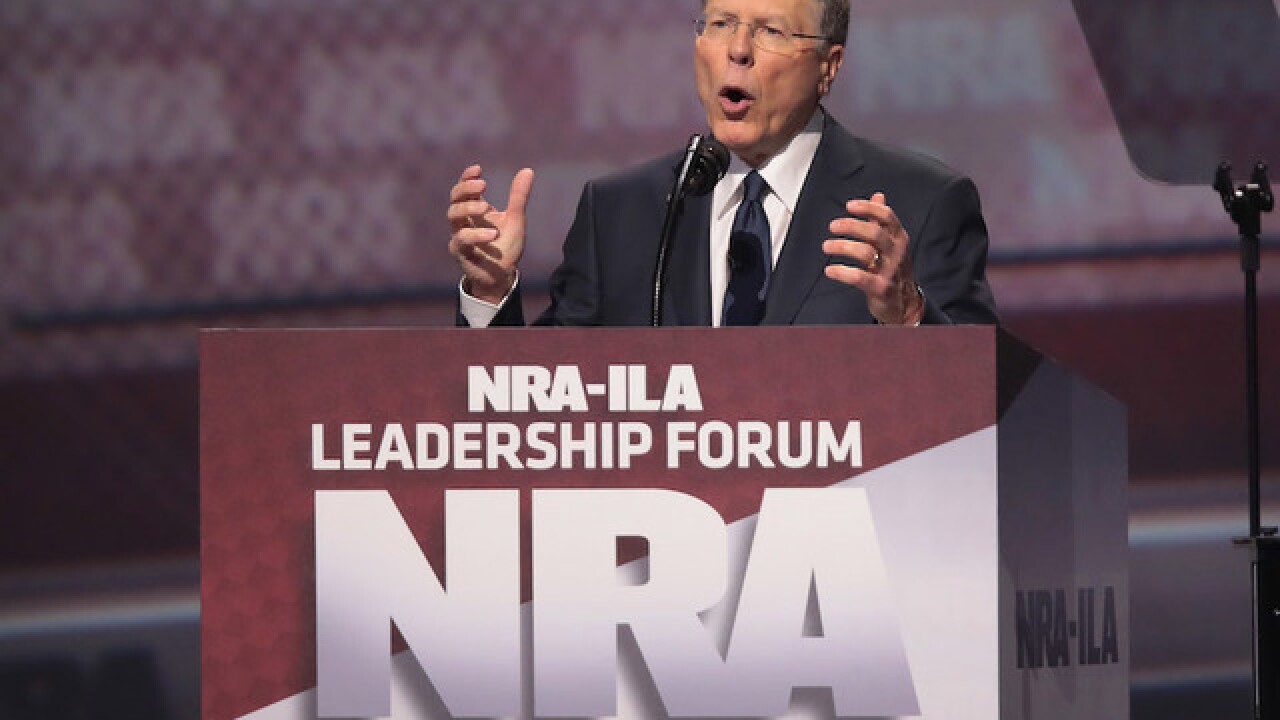 The National Rifle Association's executive vice president and CEO Wayne LaPierre slammed Democrats for their reaction to the mass shooting in Parkland, Florida, and warned of government overreach extending far beyond the limiting of fire arms.

"What they want is more restrictions on the law-abiding," LaPierre said on stage at the Conservative Political Action Conference outside Washington. "They want to sweep right under the carpet the failure of school security."

Despite the fact that Republicans control both chambers in Congress and the White House, LaPierre spent a signficant portion of his remarks warning of expanding socialist political ideas and he called out rising star Democratic lawmakers -- many of them potential 2020 candidates -- by name. He criticized independent Vermont Sen. Bernie Sanders, California Democratic Sens. Kamala Harris and Elizabeth Warren and other high-profile Democrats like New Jersey Democratic Sen. Cory Booker.

"Socialism is a movement that loves a smear," he said. "Socialism feeds off of manipulated victims."

He added later, "You should be anxious and you should be frightened" about the potential of another Democratic takeover of the House, Senate and White House.

"If they seize power ... our American freedoms could be lost and our country will be changed forever," he said. "The first to go will be the Second Amendment."

In the aftermath of a high school shooting in Parkland, Florida, that left 17 dead, the country has found itself once again balancing the scope of the Second Amendment with its desire to protect kids in schools. LaPierre has been a deeply polarizing figure as an outspoken and consistent advocate for gun rights, who has previously been among the public figures to voice the NRA's position in the wake of mass shootings.

LaPierre said the NRA will provide support and guidance on how schools can protect themselves free of charge. He argued that was "more" than the Democratic Party or news organizations were doing.

"We share a goal of safe schools, safe neighborhoods and a safe country," LaPierre said, and warned that "Evil walks among us."

LaPierre's speech comes just a day after Florida Republican Sen. Marco Rubio, who has an A+ rating from the NRA, announced he was in favor of raising the age limit from 18 to 21 on individuals purchasing semi-automatic weapons like the AR-15 and Rubio told the audience he was reconsidering his past opposition to limiting the size of large gun magazines.

"I absolutely believe that in this country if you are 18 years of age, you should not be able to buy a rifle, and I will support a law that takes that right away," Rubio said, making the comments during a CNN town hall in Florida. The NRA was represented at the town hall by the organization's national spokeswoman, Dana Loesch, who faced sharply critical comments from Parkland shooting survivors and family members of slain gun victims.

On Wednesday, President Donald Trump hosted students and parents at the White House for a raw, televised listening session. By Thursday morning, Trump tweeted he was committed to pushing for comprehensive background checks and limiting the age of those buying assault-style weapons.

"I will be strongly pushing Comprehensive Background Checks with an emphasis on Mental Health. Raise age to 21 and end sale of Bump Stocks! Congress is in a mood to finally do something on this issue - I hope!"

A cornerstone of LaPierre's speech centered around the fact that the NRA says they've worked to try and fix the country's background check system by encouraging lawmakers to fight to incentivize states to enter records into the National Criminal Background Checks system.

"When you hear politicians who won't fix the broken system talk about expanding it, don't buy it," LaPierre said in a pre-recorded video.

Limiting the size of gun magazines and raising the age limit on buying rifles, including guns like AR-15 style rifles, are both positions that the NRA opposes.

Just minutes before LaPierre was scheduled to speak, Trump tweeted that he defended the NRA.

"What many people don't understand, or don't want to understand, is that Wayne, Chris and the folks who work so hard at the @NRA are Great People and Great American Patriots. They love our Country and will do the right thing. MAKE AMERICA GREAT AGAIN!" Trump tweeted.

Toward the end of his remarks, LaPierre pledged the NRA will be "louder and stronger" than ever before.

"Let's be clear, we are never talking about an armed resistance against the socialist corruption of our government," he said. "We are always talking about a resistance armed with the United States Constitution and the Bill of Rights."

He also returned to an oft-used NRA slogan, one LaPierre invoked following the 2012 Sandy Hook Elementary School shooting that left 20 students and six adults dead,"To stop a bad guy with a gun, it takes a good guy with a gun."