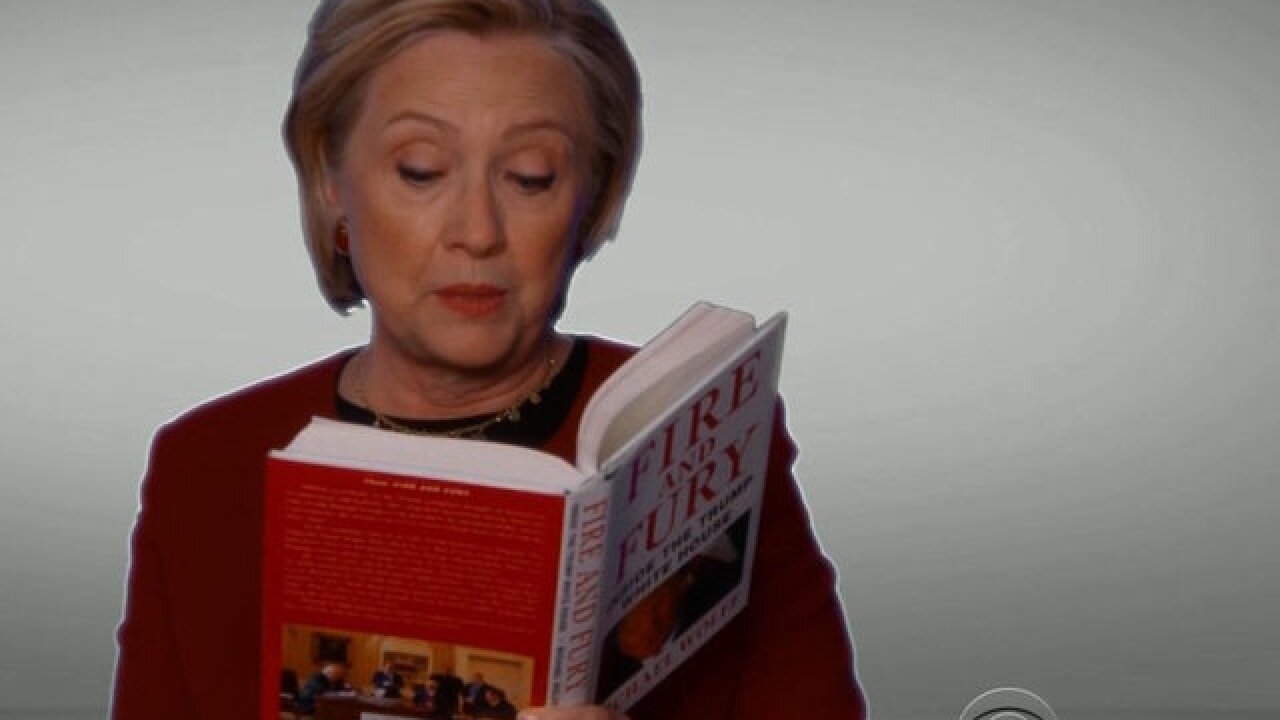 © 2018 Cable News Network, Inc.
The Recording Academy/CBS
<p>Hillary Clinton made a surprise appearance on Sunday night in a Grammy Awards comedy bit that took a jab at President Trump.</p>

Hillary Clinton made a surprise appearance on Sunday night in a Grammy Awards comedy bit that took a jab at President Trump.

The former presidential candidate, along with Cher, Snoop Dogg, Cardi B, John Legend and DJ Khaled were among those who read excerpts from Michael Wolff's "Fire and Fury: Inside the Trump White House," the hit book about Trump's first year in the White House.

The bit shows Grammy host James Corden holding auditions for the book reading in hopes of nabbing next year's best spoken word album with famous musicians trying out for the coveted role.

Clinton's face was covered by the book when she first appeared on screen in the pre-taped sketch, but the crowd cheered when she lowered the book to reveal her face.

Clinton read the famous line about Trump's love for fast food: "He had a longtime fear of being poisoned. One reason why he liked to eat at McDonalds. No one knew he was coming and the food was safely pre-made."

The Grammys producers reached out to Clinton's camp a couple of weeks ago. They toyed with a couple of different passages from the book before settling on the excerpt about Trump's McDonald's habit, according to a person who was involved with the taping, which took place last week in New York City.

The gag was originally only going to include two or three other people, but it grew over the time, the source said. Wolff had no immediate comment on the Grammys bit.

The sketch has already drawn the ire of at least one prominent White House figure. US Ambassador to the United Nations Nikki Haley fired off a tweet on Sunday night shortly after the bit aired.

"I have always loved the Grammys but to have artists read the Fire and Fury book killed it," Haley tweeted. "Don't ruin great music with trash. Some of us love music without the politics thrown in it."

Haley took to the radio waves on Thursday to say that a rumor sparked by the book is "absolutely not true," referring to a detail in "Fire and Fury" that alleges that she carried on an affair with President Trump.

"Fire and Fury" has sold 1.7 million copies, according to publisher Henry Holt & Co. The book has had remarkable staying power. It held onto the No. 1 spot on Amazon's best selling books list for almost the entire month of January. Over the weekend, it slipped to No. 2 -- but the Grammys may give it another shot of publicity.