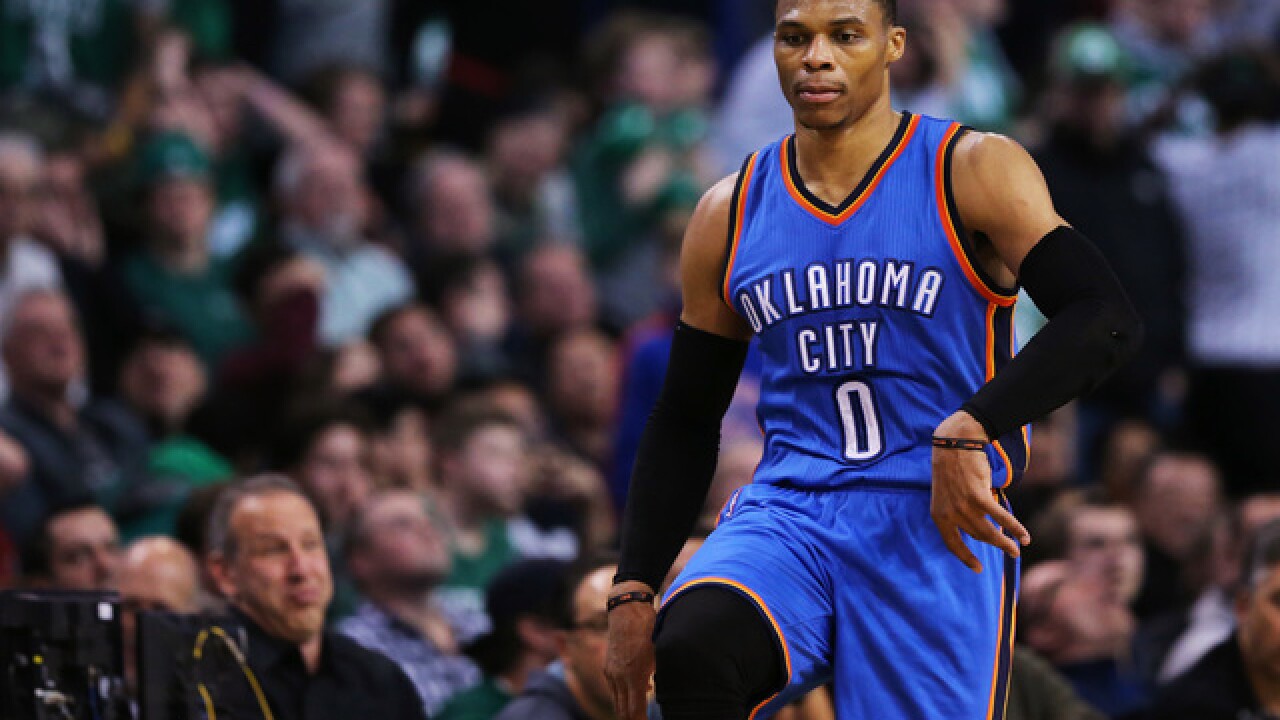 Copyright 2017 Scripps Media, Inc. All rights reserved. This material may not be published, broadcast, rewritten, or redistributed.
Maddie Meyer
<p>BOSTON, MA - DECEMBER 23: Russell Westbrook #0 of the Oklahoma City Thunder dances to celebrate hitting a three point shot against the Boston Celtics during the fourth quarter at TD Garden on December 23, 2016 in Boston, Massachusetts. The Thunder defeat the Celtics 117-112. NOTE TO USER: User expressly acknowledges and agrees that, by downloading and or using this Photograph, user is consenting to the terms and conditions of the Getty Images License Agreement. (Photo by Maddie Meyer/Getty Images)</p>

DENVER (AP) -- Russell Westbrook broke Oscar Robertson's 56-year-old record with his 42nd triple-double of the season Sunday, then he broke the Denver Nuggets' hearts with a buzzer-beating 3-pointer for a 106-105 victory.

That eliminated the Nuggets from playoff contention.

Westbrook had 50 points, 15 rebounds and 10 assists in breaking Robertson's record of 41 triple-doubles that stood since the 1961-62 season.

Westbrook's record-breaking assist came with 4:17 remaining after a series of missed shots delayed his historic moment

With his triple-double in the books, Westbrook scored his team's final 13 points, including a 3-pointer as the buzzer sounded after a timeout with 2.9 seconds left.

Kyle Single inbounded the ball to Steven Adams, who fed Westbrook for the winner.

Danilo Gallinari scored 22 of his season-high 34 points in the third quarter to lead the Nuggets, who were hoping to take the race with Portland for the final Western Conference playoff spot down to the final two games.

Before tip-off, Nuggets coach Michael Malone said he wouldn't care if Westbrook broke the record so long as it came in a loss.

"I want to win. That's the most important thing for me is if we get a win and he breaks the record, gets a triple-double, so be it," Malone said. "I think the most important analytical stat out there is wins and we need to win today if we want to continue to go on this road trip and play meaningful basketball for the last two games."

The Nuggets then blew their double-digit lead by allowing Westbrook to score the game's final eight points.

The Thunder is locked into the sixth seed and will face Houston in the first round of the playoffs in a showdown between Westbrook and his chief rival for the MVP award, Rockets point guard James Harden.

Westbrook had 23 points, a dozen boards and half a dozen assists by the time the Thunder went to the locker room trailing 53-52 at halftime at the Pepsi Center.

Westbrook nearly had his 10th assist with two minutes left in the third quarter but Enes Kanter lost the handle going up for the basket and Westbrook took a seat until the fourth quarter.

Upon his return, Westbrook again fed Kanter, who took several steps on his way to the basket and was whistled for traveling with 8:20 left.

With the crowd again on its feet anticipating history, Westbrook passed to Domatas Sabonis, whose jumper rimmed out at 7:16. Sabonis missed another short jumper with 5:39 left that would have given Westbrook the record.

Finally, Westbrook fed Semaj Christon in the right corner for a 3-pointer that pulled the Thunder to 101-91 and gave Westbrook his record.

Thunder: F Doug McDermott was a late scratch with a sore left knee. ... Coach Billy Donovan said it'll be up to Westbrook if he wants to rest during one or both of the Thunder's final two games. Donovan said he'll defer to his players, who might choose rhythm over rest.

Thunder: Wrap up their four-game trip at Minnesota on Tuesday night before finishing against Denver on Wednesday night.

Nuggets: Visit Dallas Tuesday on the first night of a back-to-back to end their season.