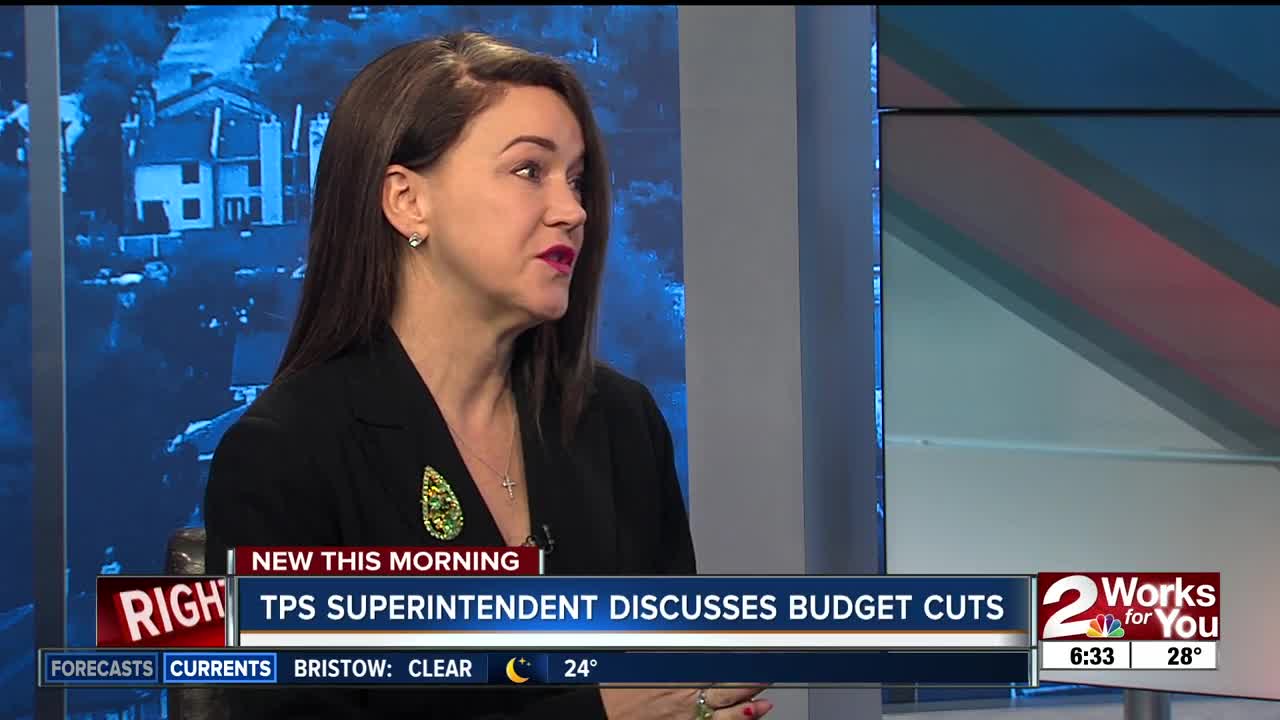 Tulsa Public Schools Superintendent Dr. Deborah Gist sat down with Travis Guillory to talk about her plan to fill a $20 million hole in next school year's budget. 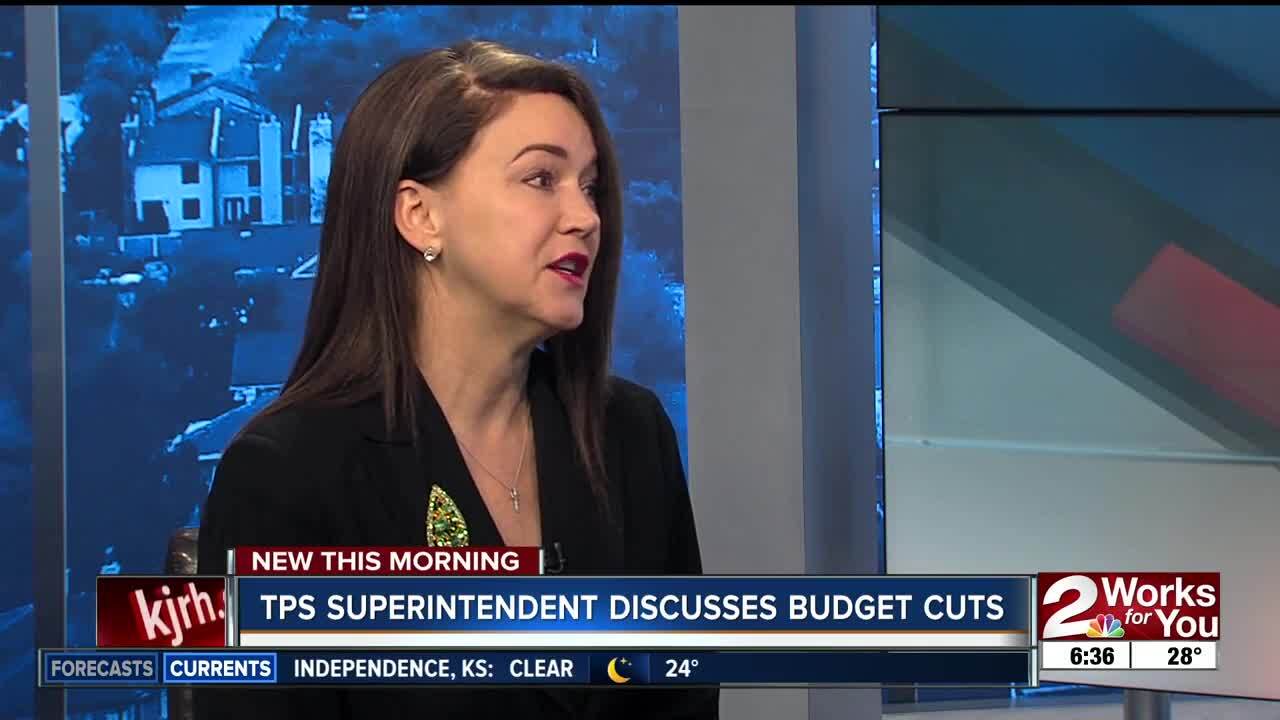 TULSA — Tulsa Public Schools Superintendent Dr. Deborah Gist sat down with Travis Guillory to talk about her plan to fill a $20 million hole in next school year's budget.

We asked viewers to submit questions on our Facebook page.

Sam asked, "Why were these four schools (Grimes, Wright, Mark Twain, and Jones) chosen for closure? Why aren't any secondary schools being closed?"

Well, let me answer the second part of that first. We focused on elementary schools for these recommendations. A lot of people remember Project Schoolhouse in 2011. I think about 14 schools were closed. There was an emphasis on the middle schools that year. A lot of people don't realize that our middle schools and high schools are together in the same building. About half of them have a middle school and a high school together, so it's a 6th through 12th or 7th through 12th. So, they look at the high school numbers and feel like the schools are small; they don't realize there's another group of students in a different set of grade levels in that school ask well. That's the reason we ended up with recommendations around elementary. We look at everything from historical and projected enrollment, census data, the building's conditions, the building's size, how much of the building is being used. We also need to look at the surrounding schools and how their enrollment is looking and how much of their building is being used.

So, it's just a matter of space being empty and you saw a need to move those students somewhere else and re-allocate services and resources there?

Right. As few as 35 percent of the building being used in the recommendations we're making.

Jeff asked, "Would you be open to an independent financial and physical audit?"

Absolutely. Not only are we, we do one every single year. It's required, and it's available on our website.

We're talking about $20 million dollars. That's not pocket change; that's a lot of money. How did the district get into this position? Was there some bond proposition that failed that started a downward trajectory or was it just a slow thing over time?

It was definitely over time. Fortunately, we've had tremendous support from Tulsans on our bonds. In fact, our last bond passed by more than 80 percent of Tulsa voters. This has been decades in the making, Travis. i think it's important for folks to realize there are really two factors that are going on. The biggest factor, as it's a factor that affects every school in the state, are the massive state cuts that our schools have experienced. But it's the second factor, along with a number of other things that make Tulsa different from some of our friends in the suburbs. When our enrollment, which is the second factor, is declining, which it has been for many decades . . . we were twice the size we are now when I was in Tulsa Public Schools in the 70s . . . that affects our bottom line because we're funded on a per pupil basis. So, it's the combination of those two things. So, we're working to stabilize our enrollment and we're also going to continue to advocate and ask Tulsans to do the same to make sure that we're continuing to re-invest in education to at least get back to what we were spending in 2008.

So, you really wanted to focus on the service center; you wanted to stay away from teachers and students. People always say, 'There is too much money being spent at the service center. Why is there so much money being spent there? What about the teachers? What about the students?' So, you guys really wanted to focus on the education service center and the folks there. What are some of the things that are going to be cut that are going to make your way to that $20 million gap?

Well, we always have had a commitment. We heard from Tulsans. They want us to start as far away from students and teachers as possible. I think it's important for people to know that there's a perception that we are top-heavy. We are not top-heavy. There is a perception there are too many people in our district offices. We actually don't have enough people in our district offices. So, when you think about the square miles that the folks who mow our grass mow. it's hundreds of square miles every single week . . . when you think about the number of devices - 800 per technician in our IT office . . . these are unreasonable numbers in terms of ability to serve our schools well. However, we completely agree with the sentiment that when we have to make reductions or changes, we have to make them as far away from students and teachers as possible. Some of them, people won't feel the effects because we've made smart decisions like changing the way we manage our worker's comp. That's about a million dollars. People won't feel that. That's a great thing for us to do because it absolutely will not have a service effect on people. Another example, though, that will have a service change is transportation. We're holding on to transportation; we are still going to provide it, unlike districts in other places like Kansas who've stopped providing it except for at a fee for the parents. We're going to hold on to that because we know it's important to transport our kids to school. But we're going to change the way that we do it. We may need to change some of the starting and ending times of school to spread out the number of buses we need at any one time. If we have schools starting at different times, we can use those bus drivers differently.

One last quick question: the timeline moving forward. You guys are in meetings right now with parents, trying to educate the public on what those proposals are. But those are just proposals that you will then present to the board in January. From that point, when does the board make their decision?

The board is scheduled to make the decisions around the staffing plan and the school closures and consolidations on January 21. But there are lots of opportunities for people to share their thoughts and feedback at the meetings this week, always over emails and letters. There are additional meetings at the proposed schools next week. At the meetings in January, these are public meetings and we encourage folks to come and participate.

So, when are people going to know for sure if these positions are being cut, if these schools are going to be closing. When is the final decision going to be made?

January 21 is when we'll present the staffing plan, which is how class sizes are determined, and the school closures and consolidations. The changes to the district office in terms of positions, that happens at the following meeting at the beginning of February.