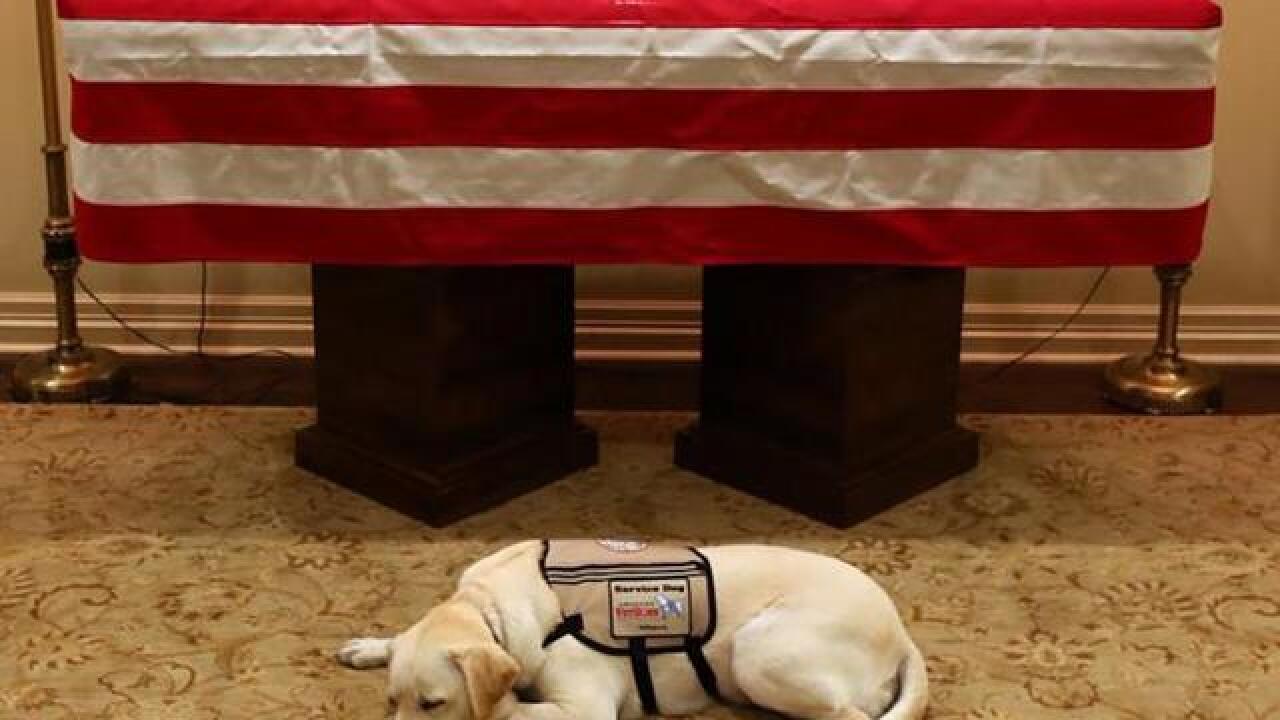 The yellow Labrador, who served the late president until his death on Friday, walked into the Rotunda on a leash with Americans in wheelchairs who have benefited from the Americans with Disabilities Act that Bush signed.

Sully is 2 years old and named for retired airline captain "Sully" Sullenberger who in 2009 landed a US Airways flight in the Hudson River off Manhattan after both engines were disabled by a bird strike. All 155 people aboard survived.

Sully the dog lay down near the casket and later sat among the disabled Americans gathered to pay their respects to Bush. He'll head off to a few weeks' training at Walter Reed National Military Medical Center and is expected to serve veterans.

The CIA has saluted the late President George H.W. Bush, the only director of the spy agency to serve in the nation's highest office.

CIA Director Gina Haspel and former directors John Brennan and George Tenet paid their respects as they visited Bush's casket in the Capitol Rotunda during a day of public viewing. Bush died Friday at age 94.

Bush was the only former CIA director to become president. The agency's headquarters in Langley, Virginia, was named for him in 1999.

Other officials who paid respects Tuesday include former Joint Chiefs of Staff Chairman Colin Powell. President Donald Trump and first lady Melania Trump were among the mourners paying respects to the former president as he was lying in state on Monday.

President Donald Trump says he'll meet with the Bush family at his guesthouse.

Trump tweeted Tuesday: "Looking forward to being with the wonderful Bush family at Blair House today."

Trump adds: "The former First Lady will be coming over to the White House this morning to be given a tour of the Christmas decorations by Melania. The elegance & precision of the last two days have been remarkable!"

The president and the first lady were among the mourners paying respects to former President George H.W. Bush as he was lying in state in the Capitol Rotunda on Monday. Bush died last week in Houston at age 94.

The prince's official residence, Clarence House, tweeted on Tuesday that he would attend the state funeral on Wednesday in Washington. He will be representing his mother, Queen Elizabeth II.

The prince is the heir to the British throne.

The queen released a statement honoring Bush over the weekend, calling the 41st president "a patriot, serving his country with honor and distinction in office and during the Second World War."

President Donald Trump and first lady Melania Trump were among the mourners to pay their respects to Bush as he was lying in state in the Capitol Rotunda on Monday.

President Donald Trump and first lady Melania Trump were among the mourners paying their respects to the late President George H.W. Bush as he lay in state in the Capitol rotunda.

The Trumps stood in front of Bush's casket with their eyes closed for a few moments Monday evening before Trump gave a salute. The former president will lie in state until services Wednesday at Washington National Cathedral.

The casket arrived Monday afternoon from Houston, where Bush died Friday at age 94. In remarks at the Capitol, House Speaker Paul Ryan praised the two-term congressman from Texas as a "great man" and a "gentle soul."

Bush chose not to have a formal funeral procession through downtown Washington. Burial at his presidential library at Texas A&M University is set for Thursday.