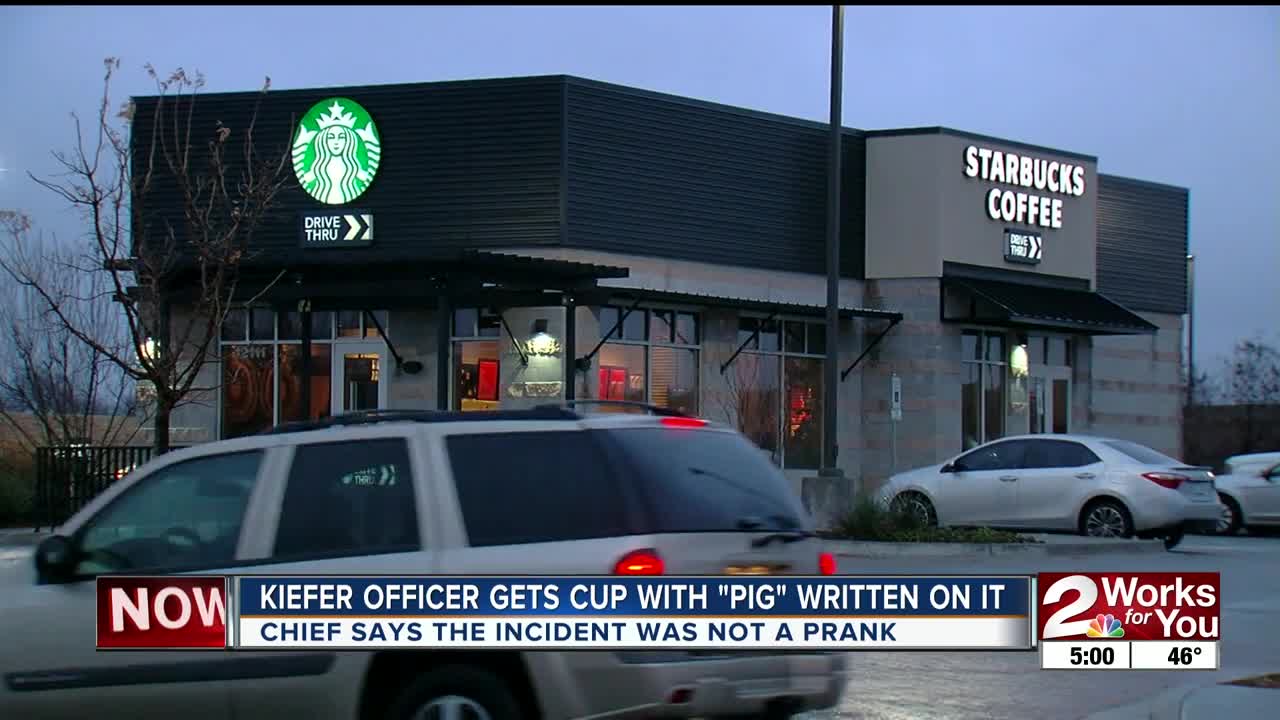 Kiefer Police Officer Gets Cup with Pig Written on It

GLENPOOL, Okla. — UPDATE: According to a statement released by Starbucks' Corporate Communications Senior Manager, "The Starbucks partner who wrote this offensive word on a cup used poor judgement and is no longer a partner after this violation of company policy.

A viral picture of a Starbucks cup with "PIG" on it went viral on Thursday.

The comments on that post posed questions about whether or not it was a "joke".

After stories of pranks began to circle on social media about Thursdays events, 2 Works for You called the police officer involved but he didn’t answer.

Chief Johnny O’Mara spoke with 2 Works for You's Tatianna Taylor on the phone instead.

O'Mara says an on duty police officer working Thanksgiving wanted to do something nice for the dispatchers. So, he went to Starbucks with five orders.

“As he’s leaving the store, a customer points out the name on his cup," O'Mara said. "As they realize Starbucks had written "PIG" on the cup.”

Since then more comments have been shared about the post.

A few saying the police officer was accompanied by a female, who jokingly said out "PIG" on the cup as a prank.

O’Mara says that’s not the case.

“Yea, that’s an online rumor," O'Mara said. "The officer went there to get Starbucks for the dispatchers. There was no prank, he wasn’t with anybody.”

The chief tells 2 Works for You the Starbucks employee apologized to the police officer following the events.

“She said that she did it on her own," O'Mara said. "I don’t think Starbucks prompted her to make the apology. She took it upon herself to apologize. She said the reason she put the word "PIG" down was because she wanted to play a joke on another barista.”

The chief says she explained it wasn’t meant for the officer.

“Her intention was to see if the barista would yell out "PIG" when they announced that the order was ready. She said that it was not intended for the officer to see the word."

With all of the confusion, 2 Works for You's Tatianna Taylor went to the Starbucks in question to ask management to comment, or clarify the rumors, but they refused.

Instead, they sent us a statement apologizing for the incident.

“None of us blame Starbucks. None of us are angry at Starbucks. We are a little disappointed in the employee," O'Mara said. "We hope that the decisions to suspend her or terminate her, you know that is up to Starbucks.”

O’Mara says Starbucks has contacted him to resolve the issue.

He’s hoping they can take this as a learning moment so the barista won’t lose her job.