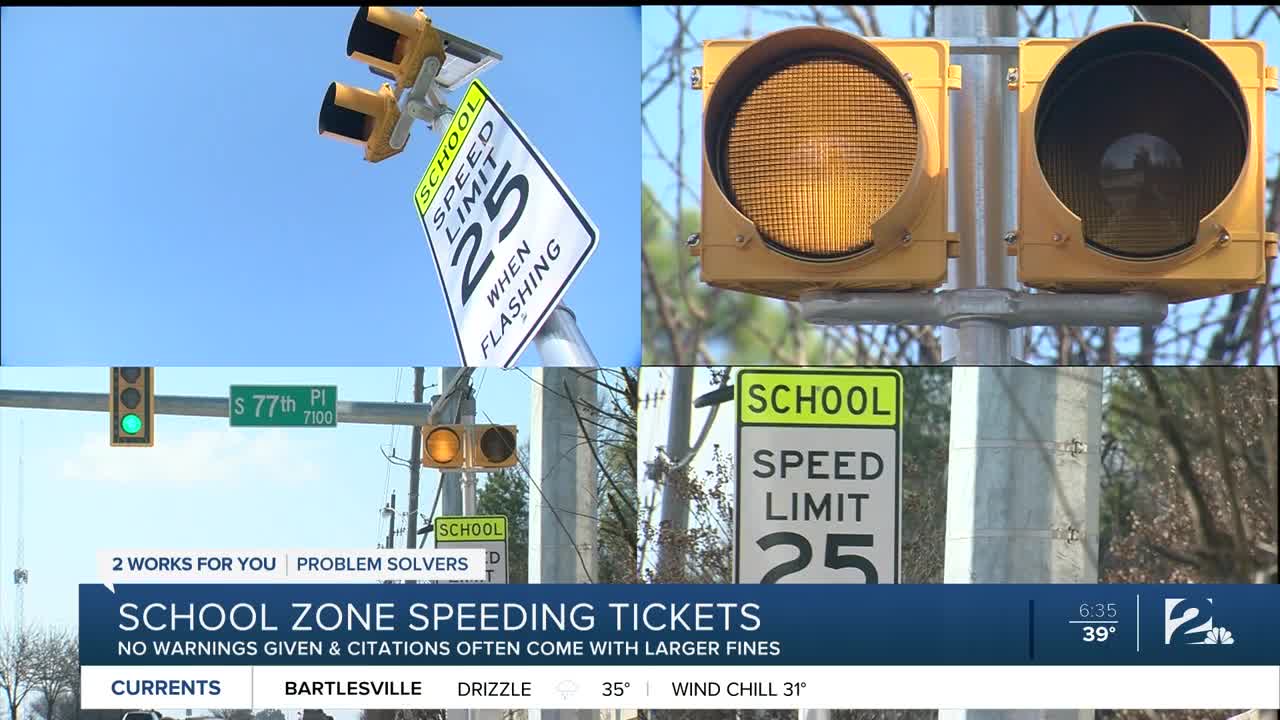 TULSA — The safety of students is on the line when it comes to school speed zones, and in Tulsa alone, more than 1,500 drivers were ticketed for speeding through these areas within the last year.

These zones are heavily patrolled by officers to keep kids' safety as the top priority. However, some argue these school zones could be speed traps with signage not properly placed or managed when it comes to keeping them visible.

A 2 Works for You investigation revealed which school speed zones see the most activity, and why some drivers think the city should do more to keep these zones safe for everyone.

For many drivers, the sight of flashing lights in your rearview mirror can ruin your day. When driving in a school zone, obey the "25 When Flashing sign." Heed the warning or get a ticket,

"He turned his lights on out of this parking lot here," Mark Jensen, a Tulsa resident, said.

Drivers who receive a ticket for speeding in a school zone aren't getting a typical speeding violation. This ticket comes with a hefty fine.

"And it carries jail time if you're found guilty," Kelly Brader, Court Administrator for the City of Tulsa Municipal Court, said.

Speeding through a school zone is serious business. Not only does it carry jail time, but also a max of $500, possibly both. And forget about a warning.

"He couldn't give me a warning because there's a new law where they have to give a ticket," Jensen said. "And you have to go to court."

Brader said it's because children's lives are at risk.

"It's different than any of the other speeding tickets because of the severity if you're speeding, and you hit a child, that's even worse," she said.

The City of Tulsa gave out 1,555 tickets for speeding in a school zone last year, and officials admit officers patrol school zones for the safety of students.

Jensen received a ticket back in November while traveling down 71st street past Thoreau Demonstration Academy, which a 2 Works for You investigation uncovered received the most school zone traffic tickets last year in the city with 551 citations.

He said because of his unfamiliarity of the area, and he didn't realize it was a school zone and never saw the sign.

"You can't see that sign until you're right on top of it," Jensen said.

He isn't the first to complain about the placement of the sign. 2 Works for You Problem Solvers did a story back in October when drivers complained the school zone sign was covered by overgrown trees. The city eventually sent a crew to clean it up.

So, what happens if you get a ticket, and the sign isn't visible?

"They can bring it to court and contest it and see what the judge says," Brader said.

Fighting that ticket will still cost you a court fee, so our team set out looking to see which school zones see the most traffic violations, and how you can avoid getting a ticket.

"Our traffic division puts up these signs, and it's set by ordinance where they have to be," Brader said.

Watch out for school zones. The city's ordinance states signs do not have to be uniform across the city, so look out for flashing signs or plane signs, and obey the 25 miles per hour rule during school hours.

Next, try to avoid school zones if possible. Our team discovered after 71st street, school zones on Harvard ranked second with the most citations tallied at 236.

In third place comes school zones on Admiral with 234 citations.

Drivers like Jensen said the headache of the ticket isn't the problem and hopes the city will evaluate sign placement in the areas most ticketed, so drivers and students can all make it home safe.