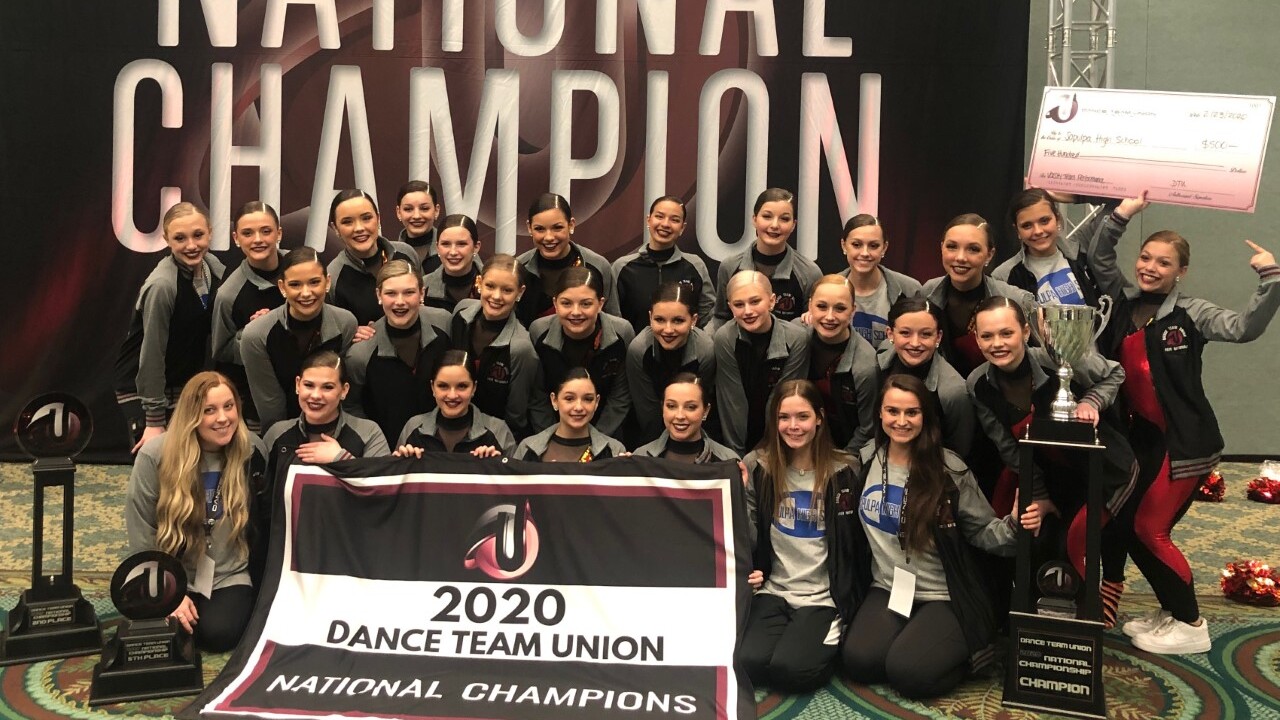 SAPULPA, Okla. — A Sapulpa High School dance team has much to celebrate today.

The Sapulpa Ping Pings were named the 2020 Dance Team Union National Champions over the weekend.

Megan Hoey, a mother to one of the sophomores on the dance team, answered the phone with her voice on the brink of being gone, from all the cheering over the weekend.

Hoey said their adventure began as the Ping Pings packed up their bags, and left on Wednesday of last week to make their way to Orlando, Florida.

Thursday was spent as a down day, Hoey explains, saying the team took the opportunity to visit Universal Studios Florida.

On Friday, the girls were given 30 minutes on the marley floor to practice their three dance routines, which included Jazz Ensemble, Varsity High Kick and Varsity Team Performance.

Later that day, the team was given five minutes on the actual stage to practice all three dances and formations, Hoey said.

Beyond that, Hoey and Coach Molly Heritage explained that the girls practiced in a large room that was being used by other teams. Hoey explained how the girls would, "pick a corner and go for it." Heritage said the team was able to get seven additional practices in on Friday in order to prepare for Saturday's preliminaries.

On Saturday, the Ping Pings arrived, received their three preliminary times slots, and were on their way to competing.

First up, Jazz Ensemble, a small group competition, followed by a 30 minute break which allowed the team to get changed in order to prepare for their second competition, the Varsity High Kick Preliminary. Afterwards, the team scrambled to change quickly in order to get set for their final preliminary, Varsity Team Performance.

Hoey explained that all three preliminary competitions were completed by 1 p.m. and shortly after, the Ping Pings received the news that they were going straight through in all three categories to the finals!

Up to this point, the highest the Sapulpa High School dance team had placed was second place.

Hoey went on to say that last year they were .2 points away from winning.

"When you know your team is that capable, that talented, and can compete at that level, it gave us a new drive!," Hoey said.

Finals began on Sunday. The Ping Pings competed and then waited anxiously until the awards were announced around 8:30 p.m. that night.

They went on to win the Varsity Team Performance at the DTU National Championships with the support of family, teammates, Coach Molly Heritage and Coach Jennifer Gardella.

This is the seventh straight year the Ping Pings won a state championship trophy.