Residents behind levees in Tulsa should prepare to evacuate, mayor says

TULSA — Those who live behind the levees along the Arkansas River should prepare to evacuate in the event that any of these levees breach as historic flooding stretch these aging levees to their limit.

Tulsa mayor G.T. Bynum said that due to continued rainfall Friday night, the U.S. Army Corps of Engineers is extending the current release rate of at the Keystone Dam of 250,000 cubic feet or water per second from Sunday until earlier Wednesday. As a result, there is now an elevated risk for areas behind the levees along the river.

A news release from the city details that areas that should prepare to evacuate in the event of a levee breach:

“If the levee system is compromised, evacuation and contingency plans must be in place for residents that live near Levee A, south of the Keystone Expressway/Hwy412, east of River City Park Rd. and west of 65th W. Ave. For residents that live near Levee B, between 65th W. Ave. to Newblock Park and south of Keystone Expressway/Hwy412. Residents should begin to prepare for a possible voluntary evacuation and remain vigilant to this evolving situation.”

Map of areas behind Levee A: 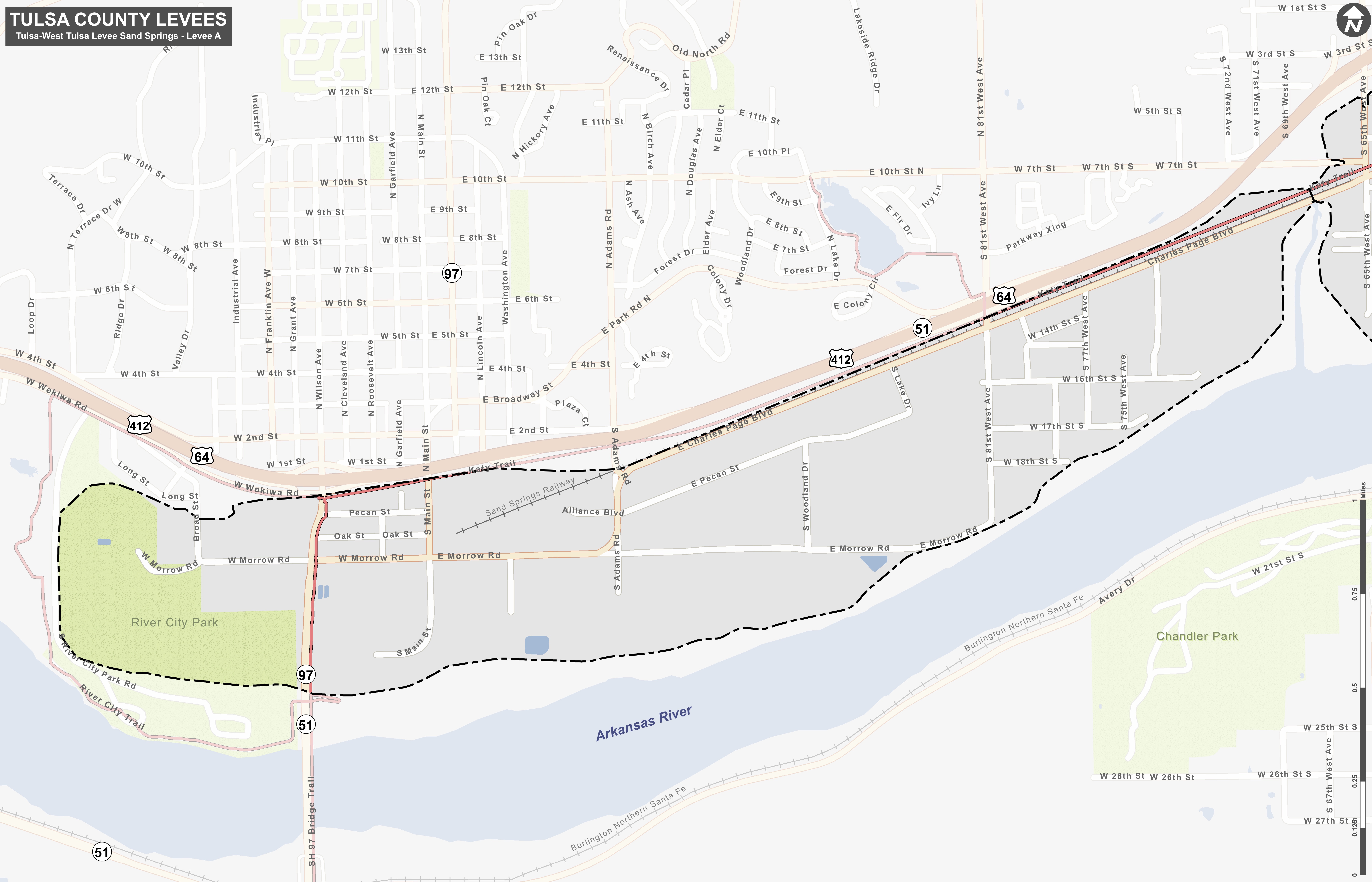 Map of areas behind Levee B: 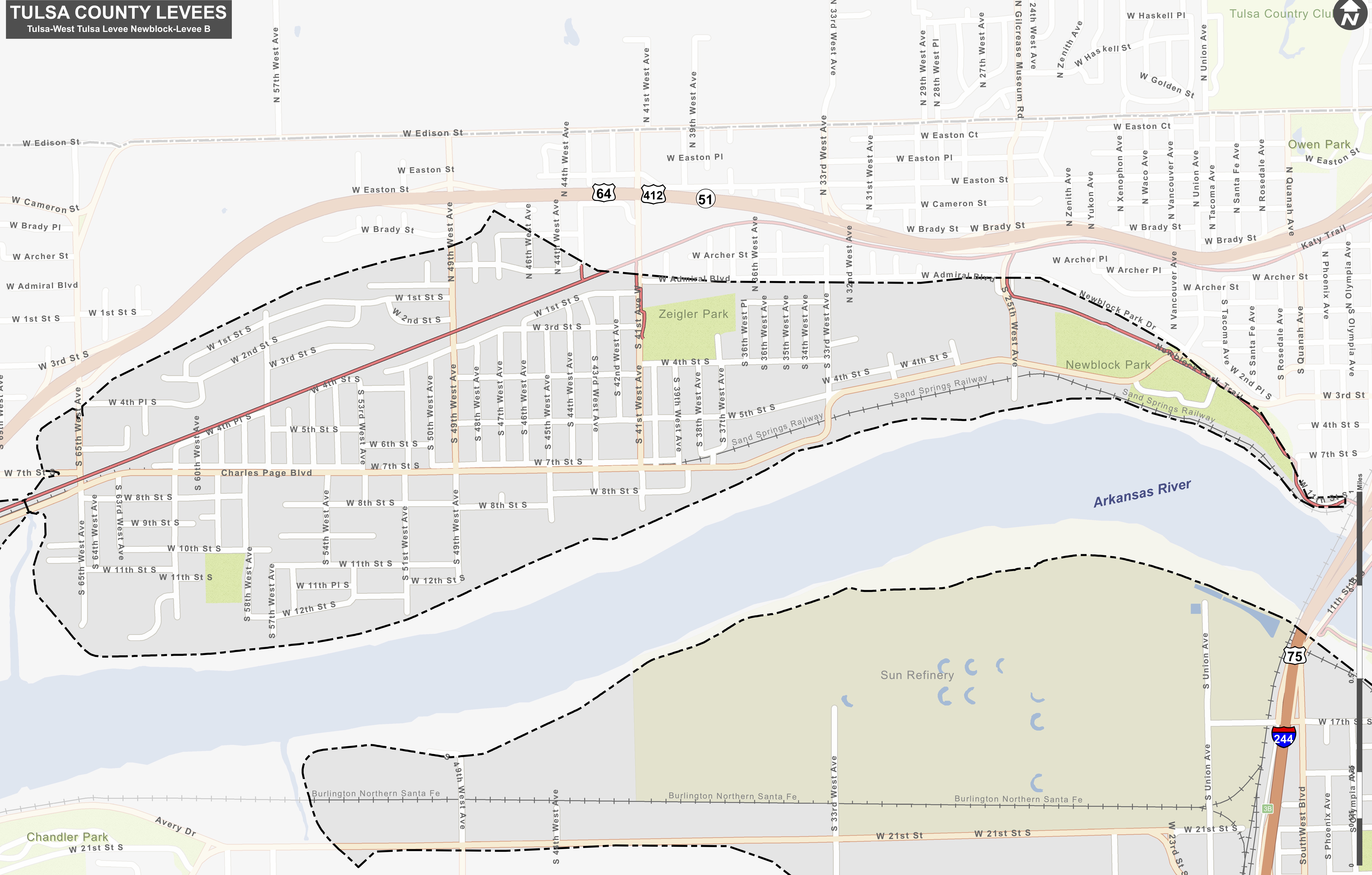 Download a PDF map of the areas behind the levees here.

The levees were built in the 1940s and haven’t seen a water load like this since 1986, when the load was for about 12 hours, Mayor Bynum said. The heavy load on the levee network for this flooding will be over 140 hours.

Mayor Bynum stressed that the levees are working as they are supposed to, and are being monitored around the clock. There are no mandatory evacuation orders for those behind the levees at this time, but Mayor Bynum said that residents should begin preparing to possibly evacuate in the event of a levee breach, and consider proactively evacuating to a friend or relative’s home.

“Go ahead, even if you didn’t have water in ‘86, please take precautions and go stay with some relatives,” County Commissioner Karen Keith said. “I would feel better about all of you if you would take those precautions”

In the event of a levee breach, residents behind the levees will have just hours of notice, compared to the significant advance notice residents along the Arkansas River had when floodwater rose in their areas, Mayor Bynum said.

“Any issue that occurs, could occur with the levees, the time frame is much smaller than the time frame for a release from Keystone,” Mayor Bynum said.

In addition, a levee could be compromised any time, day or night, said David Williams with the U.S. Army Corps of Engineers.

There are currently two evacuation shelters open to residents who wish to proactively evacuate: the Crosstown Church of Christ at 3400 E. Admiral Place, and the Faith Church at 1901 WEST 171ST St. in Glenpool. ADA service animals can be taken to the Crosstown shelter. For all other pets, a temporary shelter has been set up at the Expo Square Fairground Pavilion, south entrance.

Bynum said that Tulsa police and first responders are stepping up patrols of areas behind the levees to ensure that the property of those who choose to evacuate is safe.