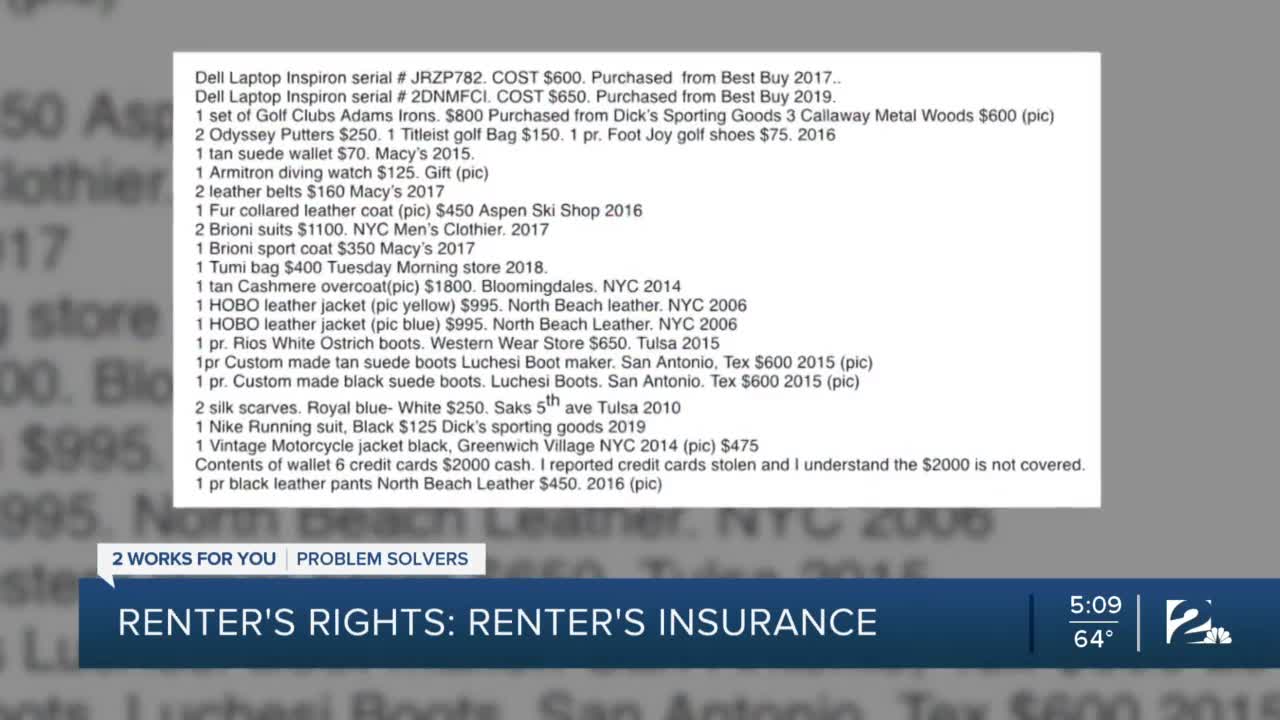 TULSA, Okla. — A Green Country man is out thousands of dollars after a burglary back in July, but he said it's his insurance company giving him an even bigger headache.

As it turns out, the company he bought the policy from isn't the one handling his claim, and getting it approved has been anything but easy. A 2 Works for You Problem Solver investigation found some things you need to know when buying renters insurance and filing a claim

"I was basically desperate, and I called you guys possibly seeking some help,” Anthony Goble said.

It’s been a whirlwind couple of months for Goble. Someone burglarized his rental property in early July and he said they made off with nearly $12,000 in irreplaceable items.

"Some of it was presents,” Goble said. “Some of these expensive leather jackets were given to me by the owners of those companies. I used to have a nightclub in Aspen. I got very friendly with a lot of celebrities."

Goble filed a police report and contacted his insurance agent in Tulsa that sold him a GEICO renter's insurance policy. The premium was $25 a month.

"They said no, we don't handle any claims."

To Goble's shock, he said the local GEICO told him the office isn't licensed to do so, and he'd have to deal with the company called "Assurant" out of Florida to process the claim.

"I said how can you possibly do that to me,” Goble said. “I called you guys locally because I wanted to deal with a local agent if anything ever happened."

He said Assurant told him in order to process his claim agents would need to see the receipts and pictures for every item. Unfortunately, he only had a few and two weeks later he received a letter denying his claim.

“They're in Florida,” he said. “I'm here. What can I do when they say they're denying my claim?"

2 Works For You reached out to officials with the Oklahoma Insurance Department, who said requesting receipts or pictures is a common request from an insurance provider to approve a claim.

"The homeowner needs to show that they actually had ownership in the items that were taken,” Mike Rhoads with the OID said.

Rhoads stresses renters or homeowners need to take inventory of belongings and secure records. However, he said receipts are not required by statute to get a claim approved by an insurance company, and if you're like Goble, you can appeal your denied claim.

"The best way to do that is through the Department of Insurance through our Consumer Assistance division, and let us assist the individual with that appeal,” Rhoads said.

When it comes to an insurance company passing off the handling of claims through other providers, the OID said it’s not the norm.

"It is disappointing from our standpoint as a regulator that the agent would not provide some additional assistance in this manner.”

The Problem Solvers put Goble in touch with the OID, which is now investigating.

Assurant has 20 days to explain why it denied the claim, and the OID will determine if the denial was legit, or if the company needs to pay up.