The proceeds from Red Nose Day, May 24, help local charities: The Salvation Army and The Community Food Bank of Eastern Oklahoma.

So what exactly is Red Nose Day?

It's an effort to raise money and change the lives of children living in poverty in the U.S. and around the world.

The biggest names in television, film, and music will come together to have fun and raise money for children in need during NBC’s fourth annual “The Red Nose Day Special,” airing Thursday, May 24 at 9 p.m.. Central on NBC. Hosted by comedian Chris Hardwick, the telecast will be broadcast live from Rockefeller Plaza in New York City. 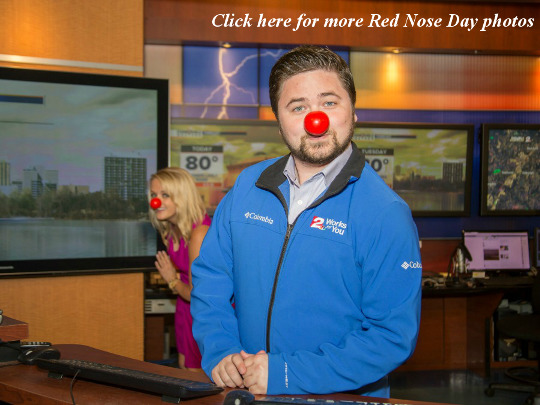 Red Nose Day is an annual event that harnesses the power of entertainment to raise money and awareness for children living in poverty in America and around the world. Since launching 2015, the campaign has raised over $100 million, positively impacting over 8.3 million children. NBC's Red Nose Day programming is a culmination of a seven-week fundraising campaign that brings together millions of Americans around the country to have fun and make a difference.

The campaign’s iconic Red Noses are on sale now exclusively at Walgreens and Duane Reade locations nationwide. Over 8 million of the Red Noses have already been sold, with all profits from all sales benefiting Red Nose Day.