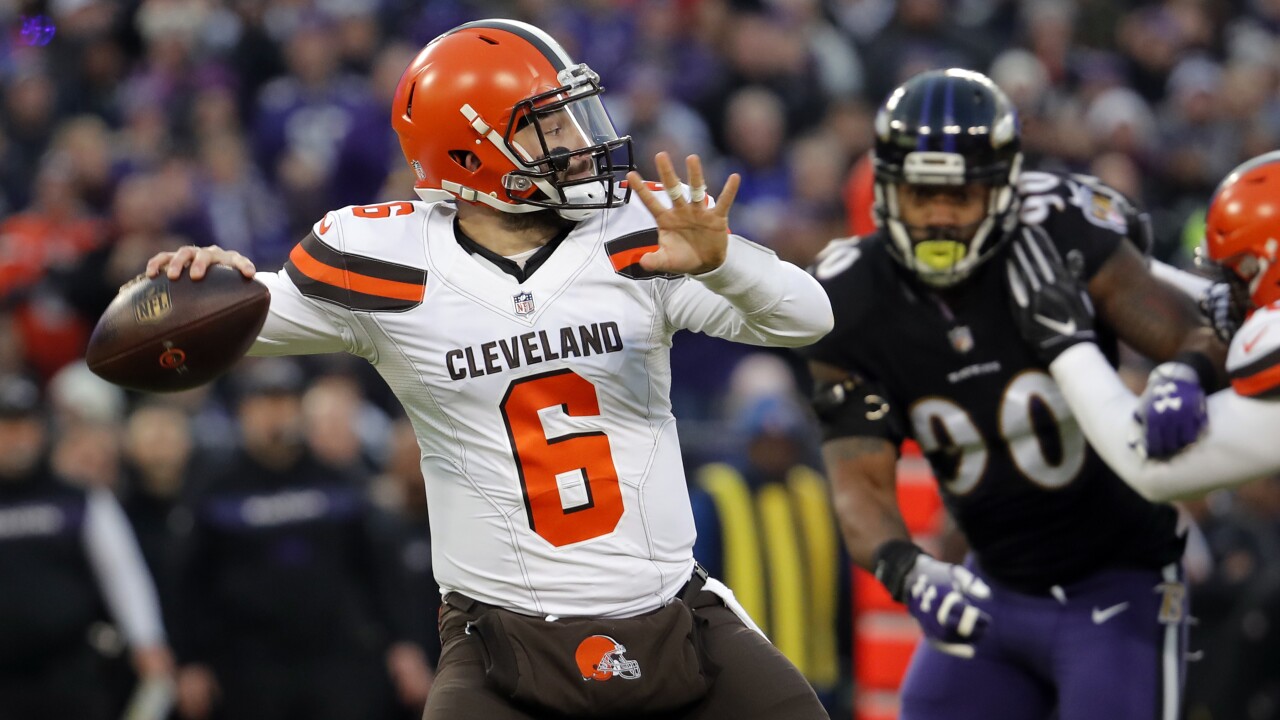 Carolyn Kaster/AP
Cleveland Browns quarterback Baker Mayfield throws a pass in the first half of an NFL football game against the Baltimore Ravens, Sunday, Dec. 30, 2018, in Baltimore. (AP Photo/Carolyn Kaster)

BALTIMORE (AP) — The Baltimore Ravens squeezed past the Browns and into the playoffs, using two rushing touchdowns by rookie quarterback Lamar Jackson and a late defensive stand to beat Cleveland 26-24 Sunday and claim the AFC North title.

Kenneth Dixon accounted for 117 of Baltimore's season-high 296 yards on the ground, Jackson had 90 and the rejuvenated Ravens (10-6) ended a three-year playoff drought with their sixth win in seven games. Fourth-seed Baltimore will open the postseason next weekend at home against the Los Angeles Chargers.

A year ago, Baltimore missed the playoffs by losing its finale at home to the Bengals, who rallied with a last-minute touchdown.

Remembering that disappointing finish quite well, most of the announced crowd of 70,925 was on its feet as the Browns moved closer to field-goal range with the clock winding down. A 19-yard completion from Baker Mayfield to former Ravens top draft pick Breshad Perriman and a 16-yarder to Jarvis Landry pushed the ball to the Baltimore 39 with 1:30 left.

Following three straight incompletions, the Ravens blitzed Mayfield on fourth down and linebacker C.J. Mosley picked off a pass to clinch it. Baltimore finished a half-game ahead of the Pittsburgh Steelers, who beat Cincinnati 16-13.

It's been quite a turnaround for the Ravens, who were 4-5 before Jackson took over for injured Joe Flacco, the team's starting quarterback since 2008. Flacco was behind center in 2012, when Baltimore captured its last division crown and ultimately won the Super Bowl.

The Jackson-led running attack was too much for Cleveland (7-8-1), which was denied its first winning season since 2007. After trailing 20-7 at halftime and 26-17 with 7:20 left, the Browns could not recover against the franchise that left Cleveland after the 1995 season.

Mayfield threw three touchdown passes to finish with 27, an NFL record for a rookie. Although he pierced the NFL's top-ranked defense for 376 yards, he was intercepted three times.

Jackson gave Baltimore a 17-7 lead with touchdown runs of 25 yards and 8 yards, his first multi-score game in the NFL. Late in the first half, however, the former Louisville star lost a fumble when trying to reach over the goal line.

LB Terrell Suggs set a Ravens record for games played with 229, breaking a tie with Ray Lewis. It's also the sixth-most by a linebacker in NFL history. ... Mayfield has thrown a TD pass in 13 straight starts, the first Browns QB do so in a single season since Frank Ryan in 1966. ... Baltimore earned its 200th regular-season win and capped its sixth 10-win season in 11 years under coach John Harbaugh.

Browns: DL Larry Ogunjobi was evaluated for a concussion and cleared to return in fourth quarter. ... DB Damarious Randall missed time in the third quarter with cramps.

Browns: First priority during the offseason is to decide whether Gregg Williams sheds the interim label as head coach or if someone else gets the job.

Ravens: Face the Chargers, a team they beat 22-10 last weekend.