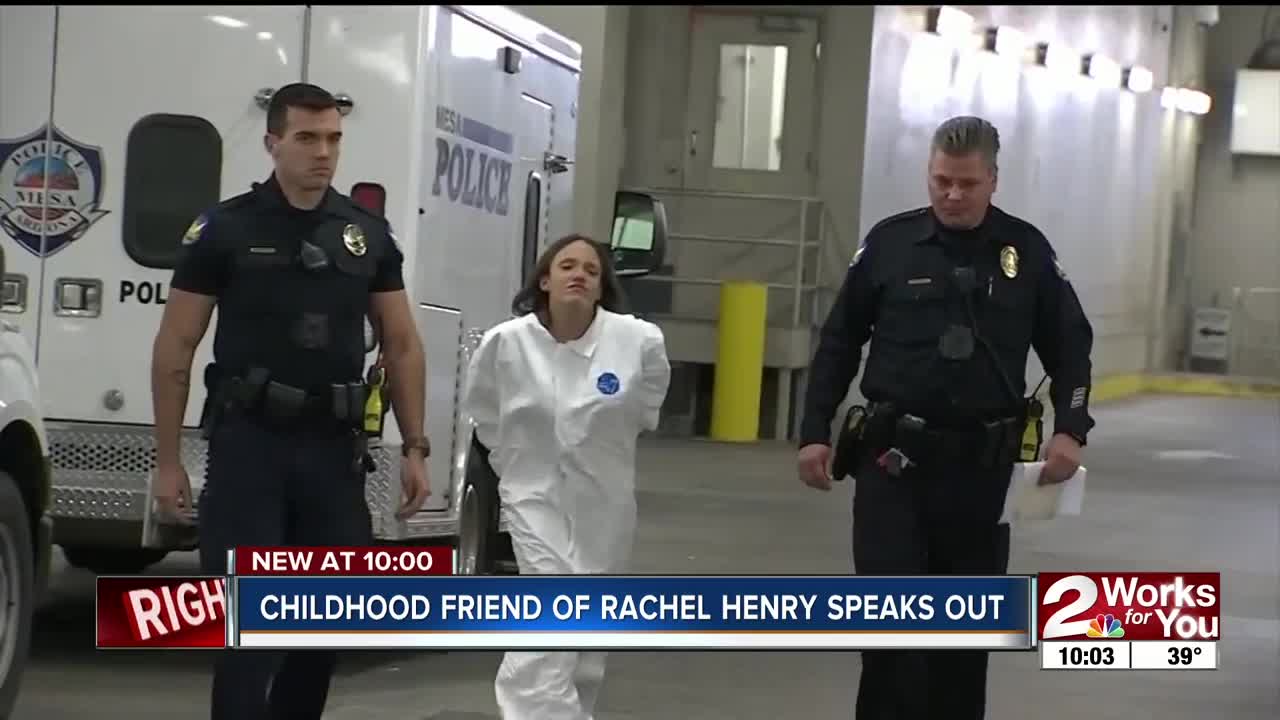 PRAGUE, Okla. — What would compel a mother to suffocate her own children to death?

Rachel Henry is a 22-year-old mother who grew up in Prague, Okla. Henry was the mother of three kids who admitted to allegedly taking their lives. On Jan. 20, she was arrested in Phoenix, Ariz. where she was currently residing.

KJRH spoke with one of Henry’s middle school friends who would like to remain anonymous due to the backlash she has been experiencing through social media, by having known Henry. We will call her “Renee.”

“Renee” still lives in Prague and says she attended middle school with Henry.

“Renee” shares that Henry was like any other teen growing up and that she also struggled with peer acceptance.

“She was fun to be around. She was very smart, and she loved art. She had great grades and she was funny. She was a great friend when she wanted to be. She was very big on boys and attention. She would pay guys to go to the dance with her and bring bags of candy to school, so she could offer it to [guys]. She wanted their attention, even if they were dating her friends. Rachel did not know her self-worth,” said “Renee”.

“Renee” also recalled a good memory of the two girls during a sleepover.

“Rachel and I stayed up all night one Sunday before school playing with makeup. We put liquid eyeliner on our lips and eyes. We could not get it off and had to go to school the next morning with overly dark makeup,” said “Renee”.

KJRH asked “Renee” to describe Henry’s family and what her home environment was like.

“Her mom and dad gave her a lot of attention and loved her so much. They would do anything she wanted them to. She lost her dad at the beginning of high school. Rachel’s dad was sick. That made things a bit rough for her,” said “Renee”.

“Rachel would say violent things, [like] talking about hurting or hitting people. If a kid in the cafeteria made her mad by cutting in front of her or bumping into her or if someone annoyed her, [she would react]. Rachel was always playing around aggressively with her mom to where she would hurt her, and her mom would have to tell her multiple times to chill out and stop. Rachel did the same with some of her friends. She would get mad or irritated out of nowhere and act as if she was wrestling around and hurt them. When [her friends] would raise their voice and say that she was hurting them by squeezing them tightly, digging her nails into them, she always wore fake nails, or hitting them, she would just say she was [just] messing around and to quit being a baby or stop being sensitive,” recalled “Renee”.

“Renee” grew apart from Henry and has not had contact with her for about six years.

“Renee” was told about Henry’s arrest for her children’s murder by a mutual friend.

“I think she had postpartum depression with a few other mental illnesses like anger problems and drug addictions. [I had heard] she [also] lost her mom around the time her first child was born,” said “Renee”.

KJRH spoke with Emily Mobley, a Licensed Professional Counselor from Crossroads Counseling in Tulsa, about postpartum depression or PPD.

“Renee” added what she would be compelled to say to Henry now.

“I would ask her what would make her commit such a terrible crime. I want to know how she could even do something like that to her children. How do you kill all three of your precious babies? Your babies were fighting back, and you continued to suffocate them and then moved onto the next one. I want to know what made her think these babies deserved this. Why did she not just give them to someone that would love them?” asked “Renee”.

Could this tragedy have had a different outcome if Henry had got the professional help she most likely needed? We will never know.

KJRH asked Mobley what friends and family can do if they are afraid that a mother is suffering from PPD.

“They should reach out to knowledgeable professionals who can provide support, safety planning, and needed resources. In the Tulsa area, one excellent resource for people in crisis is COPES - (918) 744-4800. Of course, if the situation is critical, friends and family members should call 9-1-1,” said Mobley.

Henry is due in court on Jan. 28 for her arraignment.

KJRH will continue to update this story as it develops.

If you would like to donate to the children's memorial, click here to visit the GoFundMe page.