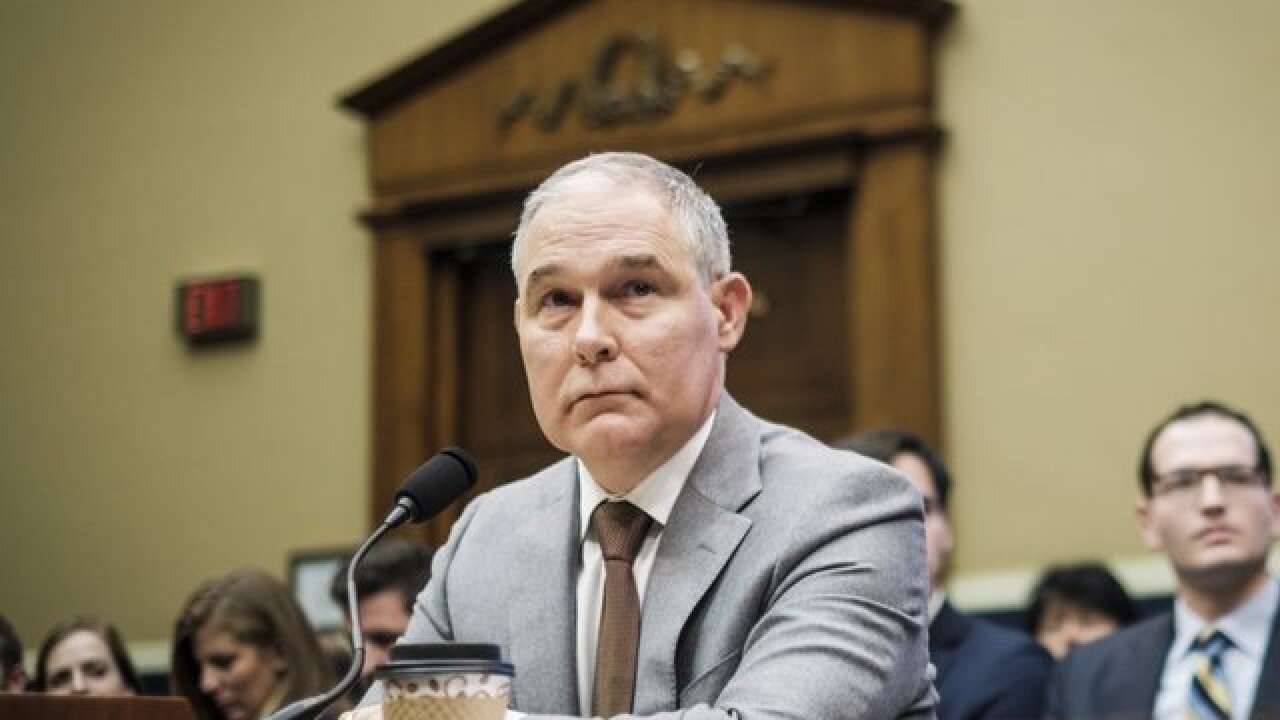 President Donald Trump is praising Environmental Protection Agency Secretary Scott Pruitt as "a good man" who has done "a terrific job" but says he's looking into a series of critical stories that suggests Pruitt may have abused his power.

Trump told reporters aboard Air Force One on Thursday that Pruitt has done "an incredible job. He's been very courageous."

But Trump also says that he'll "take a look at" the reports and "make that determination."

Pruitt is at the center of a swirl of ethics questions after it was revealed that he lived in a bargain-priced Capitol Hill condo with ties to a fossil fuels lobbyist.

Administration officials have sounded increasingly doubtful about whether Pruitt will remain on the job long-term.

President Donald Trump says he has faith in the embattled chief of the Environmental Protection Agency.

Trump was about to board Air Force One Thursday when he was asked if he still has confidence in Scott Pruitt.  The president responded: "I do."

Pruitt is at the center of a swirl of ethics questions after it was revealed that he lived in a bargain-priced Capitol Hill condo with ties to a fossil fuels lobbyist.

Administration officials have sounded increasingly doubtful about whether Pruitt will remain on the job as a White House review of his actions continues.

Pruitt has tried to shore up his position in a series of interviews with conservative news outlets.

Trump administration officials are sounding increasingly doubtful about whether Environmental Protection Agency chief Scott Pruitt will remain on the job.

In an interview Thursday on Fox News, White House spokesman Hogan Gidley says bluntly: "I can't speak to the future of Scott Pruitt."

He adds: "We don't have any announcements to make as regards to staffing right now, but we're aware and you know, we believe that some of these questions need to be answered."

Press Secretary Sarah Huckabee Sanders on Wednesday said that President Donald Trump is not OK with some of the details that have emerged, including news this week of enormous raises awarded to two of Pruitt's closest aides. Pruitt has said he didn't approve the raises and doesn't know who did.

An Environmental Protection Agency lawyer says he wasn't provided the full facts when he ruled there was no ethics violation in Administrator Scott Pruitt's lease of a bargain-priced condo.

EPA ethics lawyer Kevin Minoli issued an opinion last week saying Pruitt was paying fair-market value. In a letter dated Wednesday, Minoli says that was based on the assumption that Pruitt occupied only one bedroom for $50 a night, as outlined in the lease.

Media reports later disclosed that Pruitt's college-aged daughter occupied a second bedroom while she interned at the White House last summer. Minoli said he did not consider the value of a second room in his analysis.

Pruitt paid about $1,000 a month, less than a third of what other nearby two-bedroom homes list for.

In a marked change in tone, the White House says President Donald Trump is not OK with recent revelations involving the embattled head of the Environmental Protection Agency.

For his part, EPA Administrator Scott Pruitt is denying he knew about big raises given to two of his closest aides and insisting he did nothing wrong in renting a bargain-priced condo tied to an energy lobbyist.

Pruitt spoke in a series of interviews with Fox News and other conservative media outlets in an attempt to shore up his eroding position in an administration that has seen other top officials depart after ethical missteps.

Trump spokeswoman Sarah Huckabee Sanders was asked if Trump was OK with Pruitt's actions, Sanders replied: "The president's not."