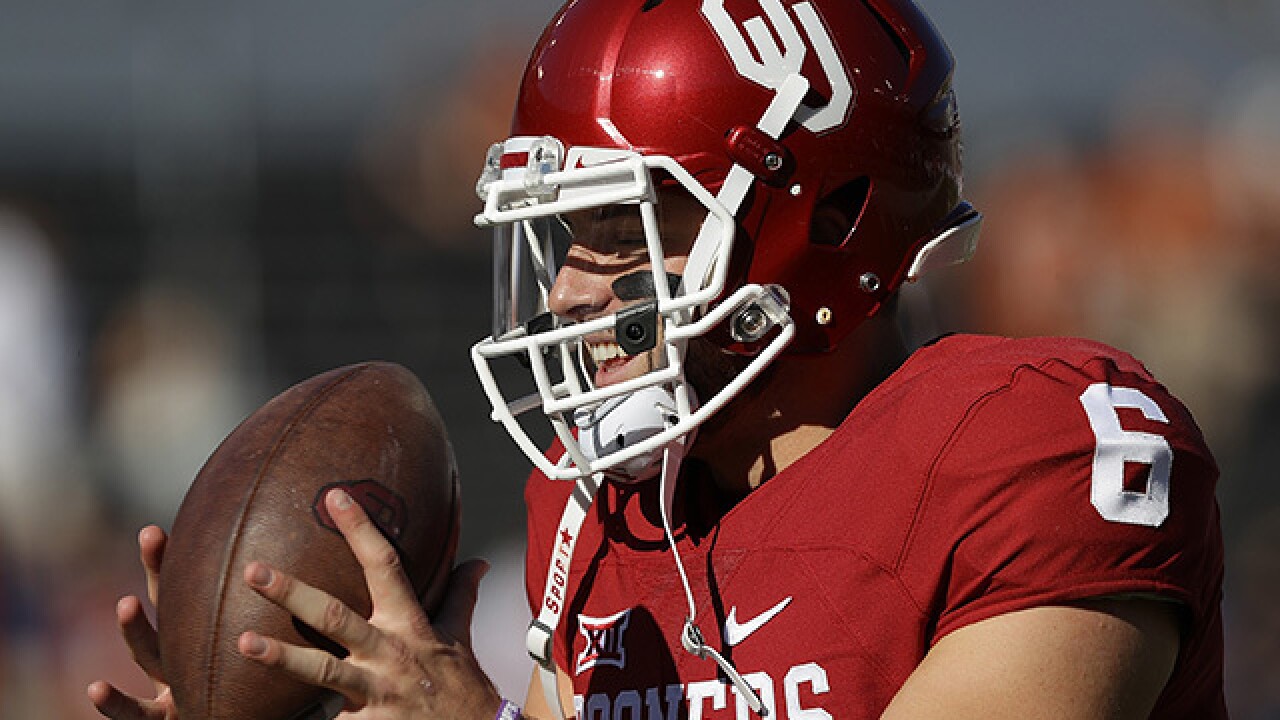 Ronald Martinez
<p>DALLAS, TX - OCTOBER 08: Baker Mayfield #6 of the Oklahoma Sooners warms up before a game against the Texas Longhorns at Cotton Bowl on October 8, 2016 in Dallas, Texas. (Photo by Ronald Martinez/Getty Images)</p>

ARLINGTON, Texas - (KFOR-TV) The No. 3 Univeristy of Oklahoma and No. 11 TCU squared off Saturday with the Sooners looking to win their 11th Big XII crown in 19 years and third in a row; it was all OU, all the time, winning the championship with a 41-17 victory.

The next step for the Sooners is the Final Four of the College Football Playoffs. They now just await their seeding in that major event.

Oklahoma received to begin the Big XII Championship and after converting on one fourth down, the Sooners had to settle for an Austin Seibert 41 yard field goal. Oklahoma took a 3-0 lead.

On the ensuing TCU possession, first play, Amani Bledsoe forced a fumble on a Kyle Hicks carry, which Caleb Kelly scooped it 18 yards and scored. The Sooners had a 10-0 lead.

Oklahoma would hold TCU on their next drive, get it back and Baker Mayfield would connect on a five yard touchdown strike with Mark Andrews. Oklahoma had a 17-0 lead.

That proved to be the best first quarter in the Big 12 title games history as the Sooners took a 17-0 advantage into the 2nd quarter.

TCU would respond in the second quarter. Kenny Hill connected with Jalen Reagor on a 29 yard touchdown. TCU cut the OU lead down to 10, 17-7 Sooners.

The momentum shifted after Seibert missed a 41 yard field goal. TCU answered back with Hill finding John Diarse for a 12 yard touchdown. Diarse hauled in an incredible one handed catch to convert the touchdown. The Sooners lead shrunk to three, 17-14.

But Heisman hopeful Mayfield wouldn’t be denied on OU’s next drive. He connected with Andrews on a seven yard touchdown and the Sooners lead ballooned back to 10, 24-14.

TCU answered quickly right before the half connecting on a field goal and Oklahoma led 24-17 at the break.

The Sooners defense held stout on the opening TCU drive of the second half, forcing a three and out.

The OU offense rode the momentum, on their first play of the second half, Mayfield found Mykel Jones, who in turn found the end zone on a 55 yard touchdown. Oklahoma jumped back out to a 14 point lead.

After the Horned Frogs failed to convert a fourth and short, Mayfield struck again. This time the Heisman favorite tossed a 58 yard bomb to Brown and OU exploded to a 38-17 lead.

After a Will Johnson interception, Oklahoma regained possession and settled with a 40 yard field goal from Seibert. OU led 41-17 with just more than two minutes remaining in the third quarter.

That would be the final score of the game. Oklahoma wins its third straight Big XII Championship (11th Big XII Title overall).

Mayfield was named the 2017 Big XII Championship Most Outstanding Player. He completed 15-23 passes, for 243 yards and four touchdowns.

Marquise Brown had three receptions for 87 yards and a touchdown.