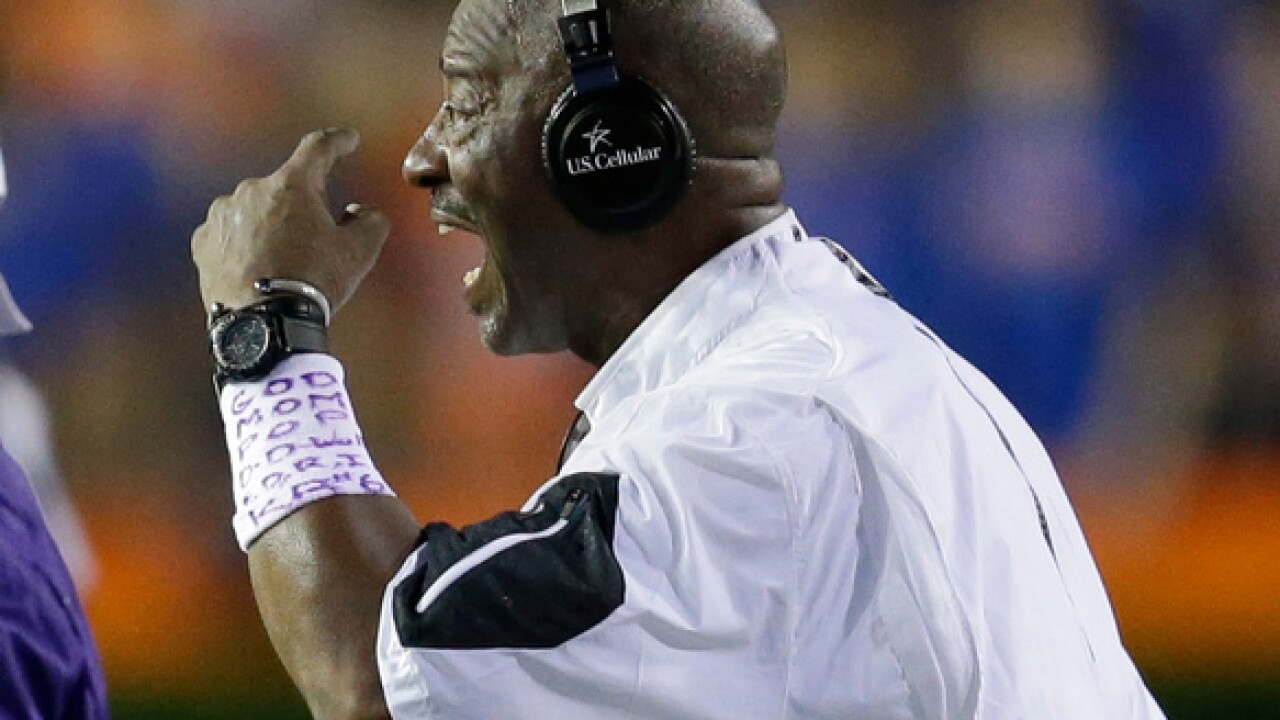 Copyright Associated Press
John Raoux
<p>FILE - In this Sept. 12, 2015 file photo, East Carolina head coach Ruffin McNeill motions to his players during the second half of an NCAA college football game against Florida, in Gainesville, Fla. McNeill no longer commands the corner office where the head coach can wow recruits and their parents with polished wood paneling decor, highlight films playing on a big screen and other signs of the trappings of playing football at his university. That seems OK with the former East Carolina coach. (AP Photo/John Raoux, File)</p>

NORMAN, Okla. (AP) -- Oklahoma has fired defensive coordinator Mike Stoops after the Sooners struggled to stop Texas in their first loss of the season.

The Sooners said Monday that Ruffin McNeill, the assistant head coach and defensive tackles coach, will be the defensive coordinator for the rest of the season.

"I have great respect for Mike," Riley said in a statement. "He's a quality football coach, great man and a close friend. It became time for a change in our program and that happens sometimes in football, but we cannot lose sight of the accomplishments Mike had at Oklahoma. He was responsible for a lot of success and deserves the gratitude of everyone associated with Sooner football, not only for his role in the winning, but for coaching with integrity."

"Ruffin has an impressive resume," Riley said. "That's why I wanted him on our staff in the first place. I have confidence in his knowledge and leadership. Bob has a lot of experience in very good programs and also has a list of accomplishments that will help him step in and make an immediate impact. We are fortunate to have these men in our program."

"All I can say is thank you (at)OU--CoachMike you gave me a shot when nobody else would and for that I am forever grateful no matter what people say they never know you for the great person you really are and how much you care for your players...Thank You Coach," linebacker Kenneth Murray posted.

Bob Diaco will move from defensive specialist to coach the outside linebackers. He has been defensive coordinator at Cincinnati, Notre Dame and Nebraska and was the head coach at Connecticut from 2014 to 2016.

The Sooners have struggled defensively the last two seasons, finishing 80th in 2016 and 82nd in 2017 in the country in yards per play allowed. Oklahoma is 17-3 under second-year coach Lincoln Riley and the Sooners have scored an average of 41 points in those games, including a 54-48 loss to Georgia in the College Football Playoff semifinal at the Rose Bowl last season.

In one of Oklahoma's worst outings under Stoops, the Sooners beat Texas Tech 66-59 in 2016, despite giving up 854 yards. That day, Tech quarterback Patrick Mahomes ripped the Sooners for an FBS record 819 yards of total offense, including 734 yards through the air, and frustration from the fanbase reached a boiling point.

After a promising start this season, the complaints returned when unranked Army controlled much of this season's game before Oklahoma pulled out a 28-21 overtime win at home. Army possessed the ball for nearly 45 minutes. At his availability the following week, when a larger-than-usual media contingent got a bit close, Stoops joked that the "vultures were circling."