Fallin wants teachers to get back to classrooms 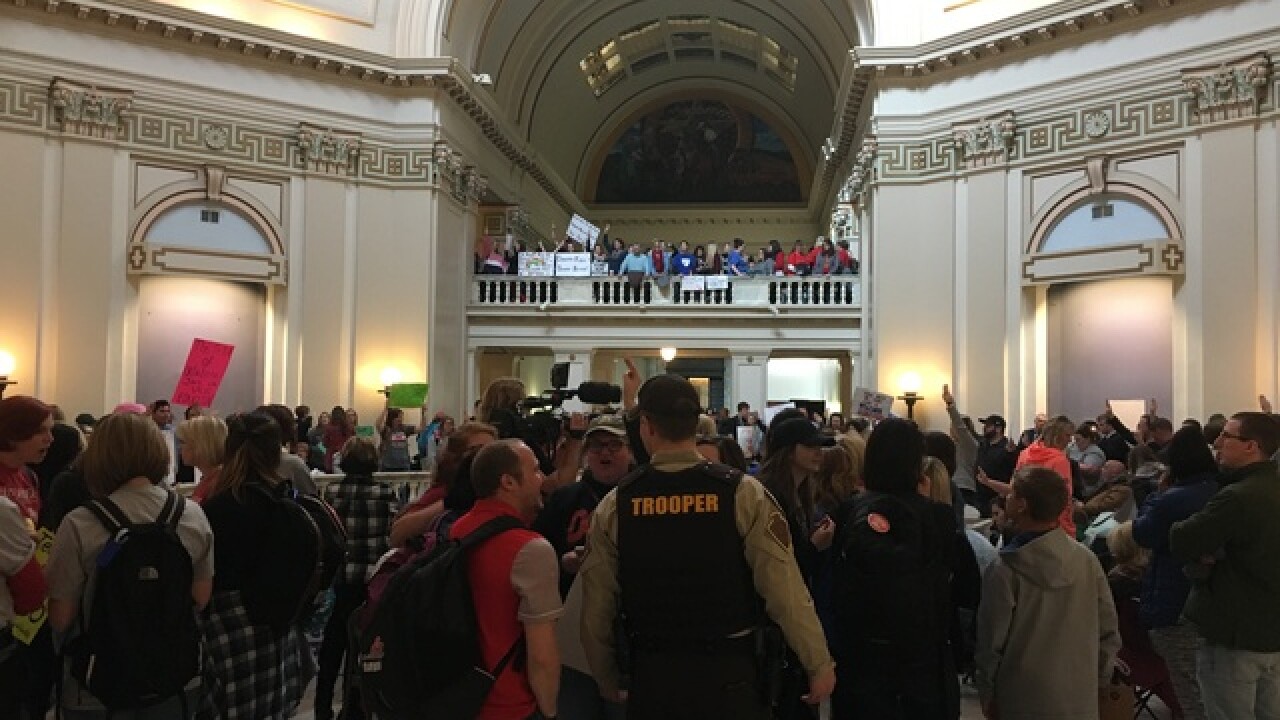 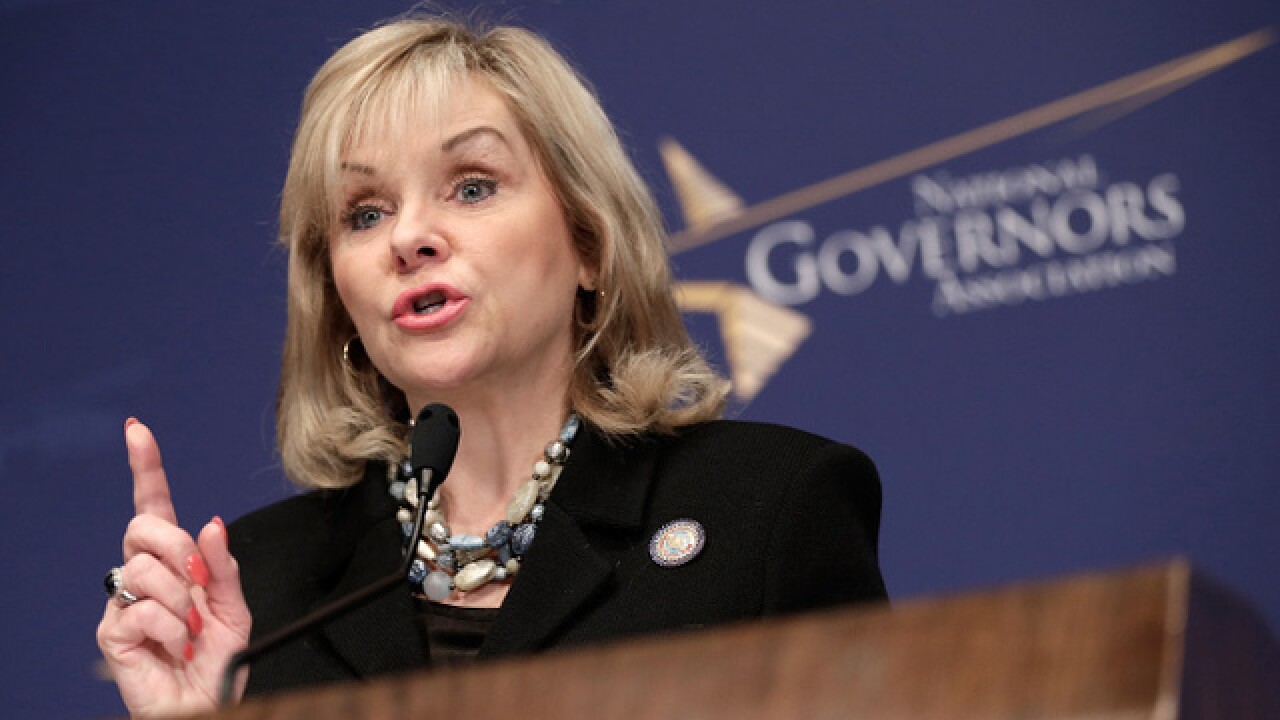 OKLAHOMA CITY (AP) -- The Latest on teachers rallying for higher pay and education funding in several Republican-led states across the U.S.  (all times local):

Oklahoma Gov. Mary Fallin says it's time for teachers to return to their classrooms following the third day of a walkout over education spending.

In an interview with Fox News, Fallin said Wednesday that education is a priority for the Republican-controlled Legislature. The GOP governor signed a measure last week that granted 15 to 18 percent salary increases for Oklahoma teachers.

In spite of the raise, thousands of teachers walked out of their classrooms on Monday, Tuesday and Wednesday, and Fallin says that has raised questions.

Fallin says "it's important to get back in the classroom and to teach our children."

The walkout began after demonstrations in West Virginia, where teachers walked out before winning a 5 percent raise. Teachers in Kentucky protested Monday over changes to their pension plans."

Oklahoma Gov. Mary Fallin says public school teachers who are striking for more classroom funding are like "a teenage kid that wants a better car."

In an interview with CBS News, Fallin says, "teachers want more, but it's kind of like having a teenage kid that wants a better car."

Fallin signed legislation last week that granted 15 to 18 percent salary increases for Oklahoma teachers. But teachers walked out of their classrooms this week demanding that lawmakers approve more funding for textbooks and technology in their classrooms.

The National Education Association says Oklahoma ranks 47th among states and the District of Columbia in public school revenue per student."

Arizona teachers plan to take their calls for higher pay and education funding to the state Capitol for the fifth consecutive week.

Save Our Schools Arizona plans a demonstration at the state Capitol Wednesday afternoon where they'll give state lawmakers "progress reports."

Teachers in some districts on Wednesday morning held so-called "walk-ins" while heading into school.

The Arizona demonstrations continue as schools in Oklahoma are closed for a third day amid ongoing teacher protests at the state Capitol in Oklahoma City. Both states have among the lowest paid teachers in the nation.

Arizona teachers are still mulling the possibility of calling a strike but haven't decided yet.

Some Oklahoma school districts say they will close for a fourth day in anticipation of a continued walkout by teachers demanding more funding for classrooms.

Officials in Oklahoma City said Wednesday classes will be canceled Thursday, and many suburban school districts announced they will close through Friday as teachers travel to the State Capitol to urge lawmakers to increase funding for education.

Thousands of teachers converged on the Capitol Monday, Tuesday and Wednesday after similar demonstrations in West Virginia, where teachers walked out before winning a 5 percent raise. Teachers in Kentucky protested Monday over changes to their pension plans.

Legislation granting 15 to 18 percent salary increases for Oklahoma teachers was approved last week, but teachers say more is needed. Teachers have not said when the walkout will end.

A group of Oklahoma students have joined their teachers on the third day of a statewide walkout by teachers seeking more funding for their classrooms.

I have a feeling these teachers and students are just getting started #Oked #okteacherwalkout pic.twitter.com/maV0BbZyaR

Grace Fox, a junior at Edmond Memorial, says she speaks for many other students who crave knowledge but are shackled by the constraints of low education funding.

Ravi Patel, a senior at Southmoore High School, says public education in Oklahoma is as bad or worse than education in developing nations.

Arizona educators and others are showing support for a push to increase classroom funding and teacher pay with "walk-in" protests outside Phoenix-area schools.

A long line of mostly red-clad teachers, students and supporters walked along a sidewalk leading to Hamilton High School in Chandler before classes began Wednesday. Similar protests were held in Phoenix, Mesa and Gilbert.

Last week, thousands of Arizona teachers protested in the state Capitol, seeking a 20 percent pay boost. Republican Gov. Doug Ducey has said he is sticking to a 1 percent increase.

The Arizona demonstrations continue as schools in Oklahoma are closed for a third day amid ongoing teacher protests at the state Capitol in Oklahoma City.

Teachers in Oklahoma and Arizona are among the lowest paid in the nation.

Some Oklahoma educators and their supporters have begun a 110-mile march to urge state lawmakers to increase funding for classrooms.

More than 100 people set out from Webster High School in Tulsa on Wednesday on the first leg of a seven-day trek to the state Capitol in Oklahoma City.

Marchers plan to hike about six hours to Kellyville High School about 18 miles (30 kilometers) away.

Many Oklahoma schools are closed for the third straight day as teachers push for better pay and education funding.

The National Education Association says Oklahoma ranks 47th among states and the District of Columbia in public school revenue per student and Oklahoma's average teacher salaries ranked 49th before the raises.

A teacher walkout in Oklahoma is entering its third day in a red state rebellion stretching from West Virginia to Arizona that is putting Republicans on the spot over public education.

Many legislators are forced to choose between placating constituents angry over years of education cuts and conservative supporters who want smaller government and low taxes.

In Oklahoma, most Republicans broke with party orthodoxy and endorsed hundreds of millions of dollars in tax increases to fund public schools. Instead of getting praised, thousands of teachers still thronged the state Capitol, demanding more money, while anti-tax conservatives vowed to challenge incumbents who supported the plan.

Teachers rallying for better pay in West Virginia started the movement, which has since spread to capitols in Arizona, Kentucky and Oklahoma.