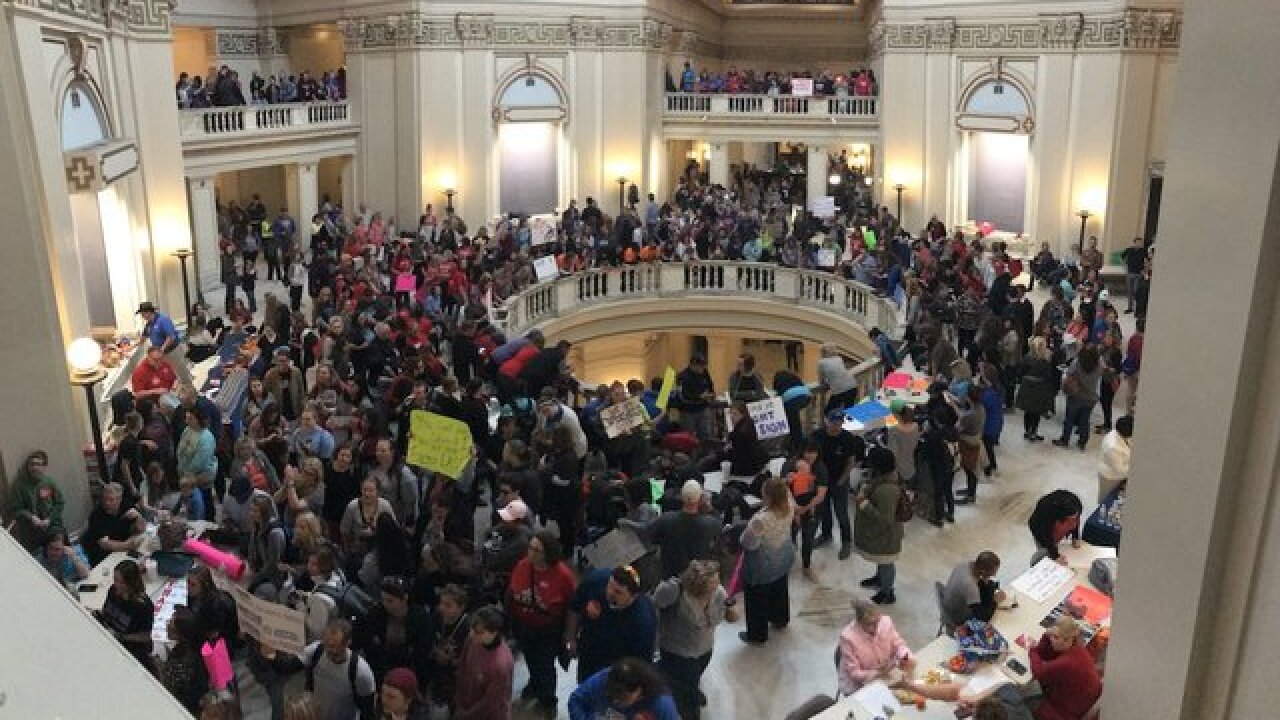 OKLAHOMA CITY (AP) -- The Latest on teachers rallying for higher pay and more education funding in several Republican-led states across the U.S. (all times local):

A leader of Oklahoma's largest teacher union says he doesn't think two revenue bills pending in the Senate are enough to prevent a teacher walkout from stretching into next week.

Duvall said that union members will decide when to end the walkout that has shuttered some of the state's largest school districts all week, but that he expects teachers to return to the Capitol next week.

The Senate is expected to take up the two measures on Friday and send them to the governor for her signature.

Oklahoma City schools, the state's largest district, and Tulsa Public Schools said Thursday they will close again on Friday as teachers return to the state Capitol for protests. Many smaller school districts have previously said they would close on Friday.

The state House and Senate will convene on Friday to take up revenue-raising measures. A Senate leader says lawmakers plan to consider "substantive" legislation.

Legislation granting 15 to 18 percent salary increases for Oklahoma teachers was approved last week, but teachers say more funding is needed for their classrooms.

Teachers haven't said when the walkout will end.

The Oklahoma State Bureau of Investigation is looking into potential threats that were made against at least three state lawmakers related to the ongoing teacher rally at the Capitol.

Brown declined to identify the lawmakers but says the threats were both written and verbal and related to the teacher walkout.

Thousands of teachers, students and their supporters have thronged the Capitol for four straight days seeking more funding for schools.

Oklahoma's Public Safety Commissioner Rusty Rhoades says troopers have identified a handful of "outside protest groups" that have attempted to infiltrate the rally. But he said Thursday there have been no reports of violence or vandalism.

An Oklahoma state Senate leader says Friday "will be an important day" in the faceoff between lawmakers and teachers who are demonstrating for more school funding.

Oklahoma lawmakers typically don't meet on Fridays during legislative sessions. But GOP leaders in the House and Senate said Thursday they plan to convene Friday to consider revenue-raising bills.

Thousands of Oklahoma teachers, students and their supporters continued protests a fourth straight day Thursday in a teacher rebellion that has ignited other Republican-led states including West Virginia, Kentucky and Arizona.

Senate special session did not vote or speak about Amazon tax. They say it has to be in senate for 24 hours before they can vote on it. Some Senators were hoping for a special adjustment to pass it. Now, senate will meet Friday. One special session, one regular. @KJRH2HD

Republican leaders of the state House and Senate said Thursday they will meet Friday to consider legislation to raise more money. Lawmakers traditionally don't meet on Fridays during legislative sessions.

Oklahoma teachers are in the fourth day of a walkout over low pay and classroom spending. The movement started with teachers striking in West Virginia and winning a 5-percent pay raise. It has continued in the conservative-led states of Kentucky and Arizona.

The protests, and some school closures, will continue for a fourth straight day Thursday amid a movement in red states from West Virginia to Kentucky to Arizona to press for more money in classrooms.

Oklahoma Republicans passed a tax hike for hundreds of millions of new dollars for public schools and teacher pay raises. But educators marched on the Capitol anyway, bringing with them pent-up frustration after years of budget cuts, swelling class sizes and a decade without a raise.

Many teachers already are back at work, especially in rural communities where local boards didn't vote to shut down. Still, schools in the state's largest districts remain shuttered, including Oklahoma City, Tulsa and many suburban communities.