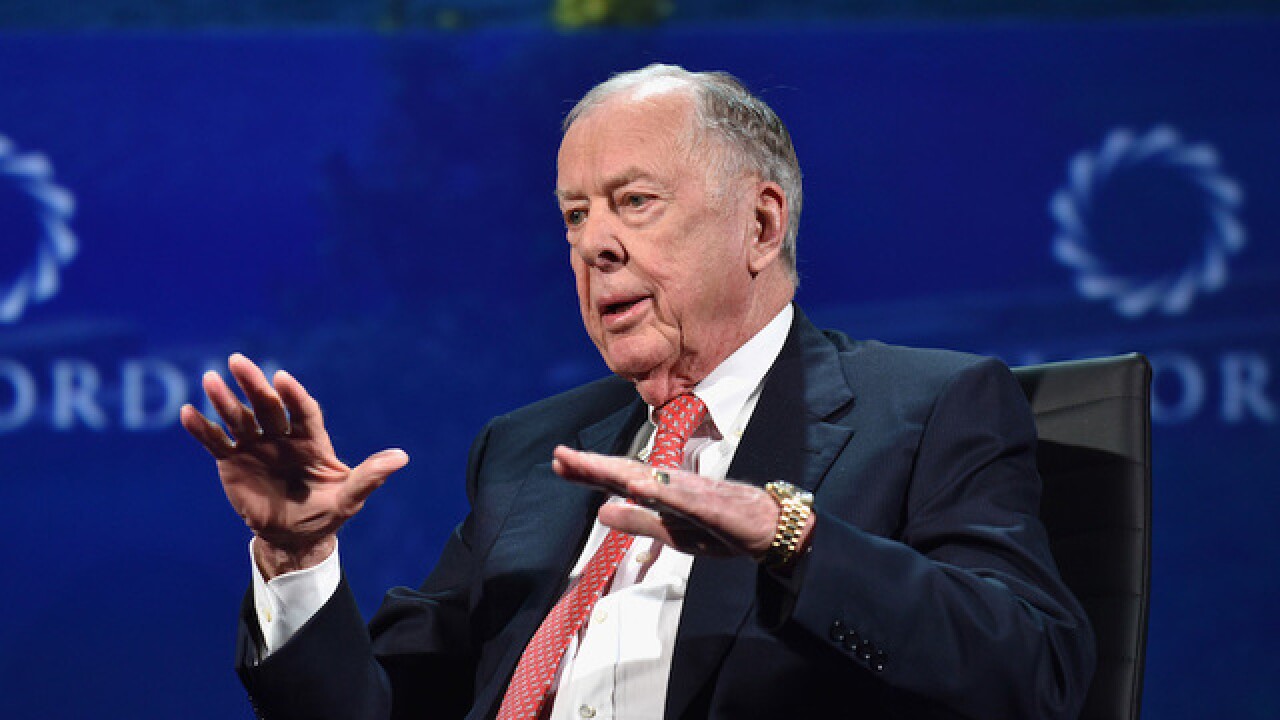 According to NBC DFW, Oilman T. Boone Pickens has died at the age of 91.

Born in 1928 in Holdenville, Oklahoma, Pickens made his fortune in oil.

He began his career with Phillips Petroleum and was the architect behind Mesa Petroleum in 1958.

Pickens donated over $1 billion to charity, more than half of which went to his alma mater: Oklahoma State University.

Pickens is survived by his wife, Toni, five children and 11 grandchildren.

Reports say that the plans for a memorial ceremony at Highland Park Methodist Church in Dallas are pending.

Here are some of the reactions to the death of the legendary oil tycoon:

Former President George W. Bush said, "T. Boone Pickens became a household name across the country because he was bold, imaginative, and daring. He was successful – and more importantly, he generously shared his success with institutions and communities across Texas and Oklahoma. He loved the outdoors, his country, and his friends and family, and Laura and I send our condolences."

“Oklahoma has lost a legend with the passing of Mr. T. Boone Pickens,” Gov. Kevin Stitt said. “T. Boone Pickens’ love and pride for Oklahoma overflowed through his contribution to job creation and economic growth and his generous philanthropy to Oklahoma’s finest institutions. I considered him a friend and mentor, and his strong legacy will long be remembered and celebrated by Oklahomans.”

“Today the world said goodbye to T. Boone Pickens with gratitude for an incredible legacy that will continue to live on after his passing," Senator James Lankford said. "His vision and entrepreneurship forever changed the energy industry, making it a driver of our nation’s economic engine and kick-starting American energy independence. Those who were recipients of the billions of dollars he gave through philanthropic efforts will be forever changed by his generosity. At the next home game, we will wear orange in the stadium that bears his name, and we’ll remember the favor of Oklahoma State University’s biggest fan. Cindy and I pray for his children and family as they grieve his passing. We are forever grateful for the lessons he provided our nation and Oklahoma during his lifetime.”

President of Oklahoma State University, Burns Hargis said, “All of us in the Oklahoma State University family are deeply saddened by the passing of Boone Pickens. At the same time, we join in celebrating his incredible life. He was the ultimate Cowboy. It is impossible to calculate his full impact on Oklahoma State. His historic gifts to academics and athletics not only transformed the university, they inspired thousands of others to join in the transformation. OSU will not be the same without the legendary Boone Pickens, but his mark on our university will last forever.”

“As a self-made billionaire and titan of philanthropy, T. Boone Pickens embodied the American Dream," Congressman Tom Cole said. "Truly one of the most influential Oklahomans in our state’s history, he leaves behind an incredible legacy that stretches far beyond the borders of Oklahoma. While it is right to be saddened by his loss, it is also right to pause and celebrate all he has done for Oklahoma and the entire country. My thoughts and prayers are with his family, friends and many loved ones. He will be dearly missed.”