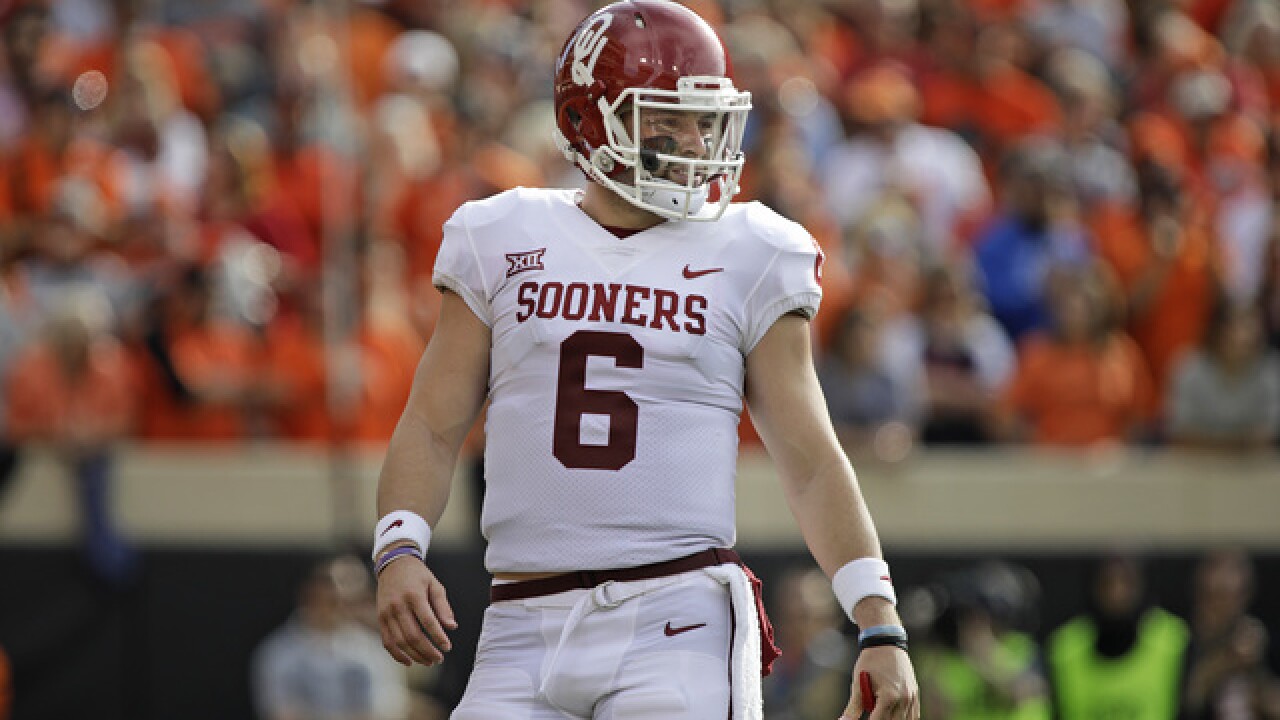 NORMAN, Okla. (AP) -- A week after Oklahoma held on for an emotional win over arch-rival Oklahoma State , the Sooners are set to play another high-stakes game.

No. 5 Oklahoma hosts No. 8 TCU on Saturday night for sole possession of first place in the Big 12. Even with all the energy the Sooners spent on Oklahoma State, Oklahoma quarterback Baker Mayfield said his teammates are focused.

"We're built for November and this run right here," Mayfield said. "I think we're ready for it. We've been talking about it all year, that we're going to have to play well late in the year. Right now, we're doing just that. On to the next one for us. It's going to be a good challenge for us."

In a game loaded with interesting matchups, the best might be Oklahoma's offense against TCU's defense. The Sooners lead the nation in total offense and passing yards per game and rank third in scoring offense. TCU ranks sixth nationally in total defense and points allowed per game.

TCU looks forward to the chance to add legitimacy to its numbers against Oklahoma.

If the past is an indicator, Saturday's game will be entertaining and tense. The past five games have been decided by a combined 21 points. The Sooners have won four of those matchups. Oklahoma won a 52-46 shootout last season , holding on after nearly blowing a 49-24 fourth-quarter lead. Mayfield passed for two touchdowns and ran for two more while TCU quarterback Kenny Hill passed for 449 yards and five touchdowns.

TCU might need even more to pull this one out.

Here are some things to watch as the Sooners face a critical roadblock in their quest for a third consecutive Big 12 title:

HILL'S MOMENT? Hill has had a good season, yet he hasn't received the same level of attention as Mayfield or Oklahoma State quarterback Mason Rudolph. He already beat Rudolph head to head earlier in the season and has a chance to put himself in the running for major awards with a win and a strong performance.

STRENGTH vs. STRENGTH: Oklahoma running back Rodney Anderson has rushed for at least 100 yards in three straight games. Mayfield relies heavily on his running game late in the season, then hurts opponents with deep passes down the field. Anderson's ability to get established against the nation's No. 1 run defense will be critical.

"HOLLYWOOD" BROWN: Oklahoma receiver Marquise Brown caught nine passes for a school-record 265 yards last Saturday against Oklahoma State and was named Big 12 Newcomer of the Week. The junior college transfer has emerged as one of the nation's most explosive players after a slow start and now leads the team in yards receiving.

MULTIPLE OPTIONS: Hill spreads the ball around. Desmon White and KaVontae Turpin are tied for the most catches with 27, John Diarse has the most yards with 404 and Jalen Reagor has the most touchdowns at four. The Horned Frogs also have two strong running backs in Darius Anderson and Kyle Hicks.

GET LOUD: Oklahoma's home crowd against Texas Tech in 2008 set the bar. Not after Saturday, if Mayfield has his way.

"Being that it's one of the last home games we're going to have and it's important to our college football playoff run, I'm going to call out our fans," Mayfield said this week. "It's going to be an important one for us. Seven o'clock game, night game. I don't want to hear any talk about the 2008 Texas Tech game. This needs to be the new talk for the future. This crowd needs to be going. We give it our all week-in, week-out, I expect the fans to do the same for me on Saturday."