Silver Alert: Missing 8-month old in Indy believed to be in extreme danger

INDIANAPOLIS — A Silver Alert has been issued for a missing infant out of Indianapolis believed to be in extreme danger.

Amiah is described as being 1 feet 1 inches tall and 13 pounds with brown hair and blue eyes.

Amiah's mother initially reported her missing on Saturday, March 16. At the time, police say the child's mother told them she had not seen her infant since Thursday and family members did not believe Amiah was in danger.

Police say during the course of their investigation, detectives were given conflicting stories which raised concerns for the child's welfare.

On March 19, police say detectives determined that Amiah may be in danger and issued a formal release asking for the public's help to locate her. A Silver Alert was later issued by Indiana State Police because Amiah's disappearance does not meet the criteria for an Amber Alert.

Tuesday, Detectives obtained a search warrant for the home in the 200 block of S. Holmes Avenue, where Amiah was first reported missing. Forensics were colleted from the scene as a precautionary measure and to help with the search for Amiah, according to police.

Why is this not an Amber Alert?

In order for an Amber Alert to be activated, the following criteria - set by the U.S. Department of Justice - must be met: 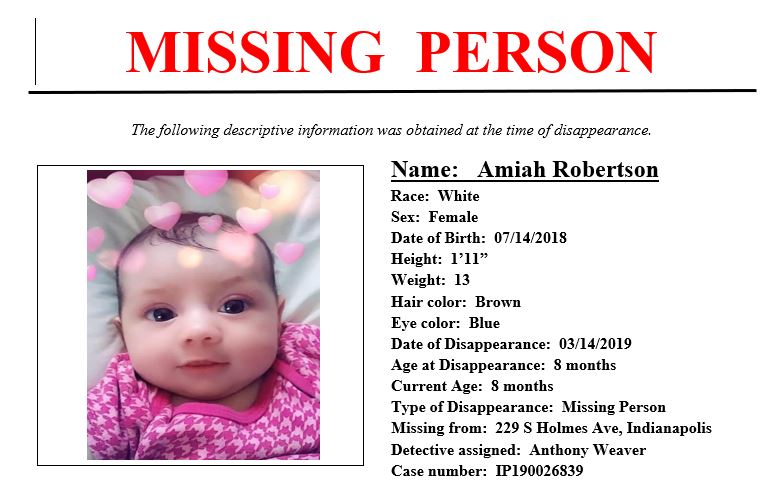