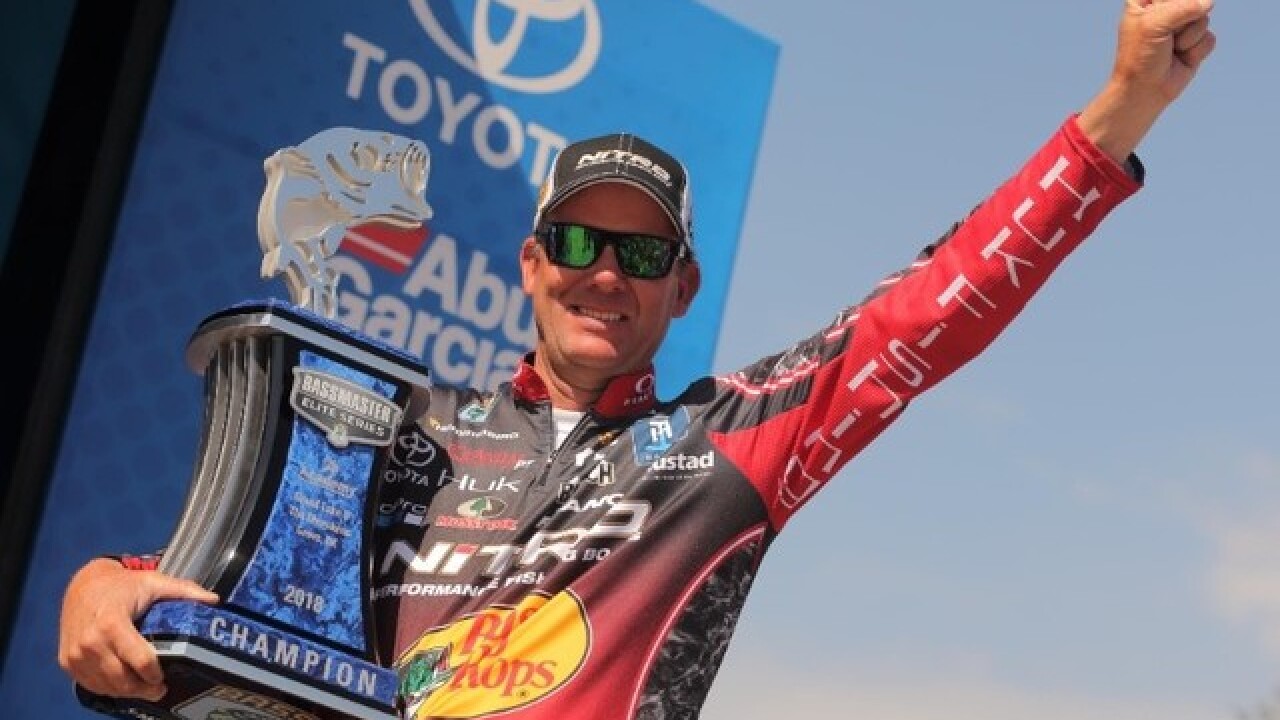 GROVE, Okla. — Kevin VanDam of Kalamazoo, Mich., relied upon large female pre-spawn bass to claim a record-breaking 25th title on the Bassmaster Elite Series, and a $100,000 payday at the 2018 Academy Sports & Outdoors Bassmaster Elite on Sunday at Grand Lake.

During the Championship Sunday, VanDam put up 18 pounds, 7 ounces to push his four-day total to 83-4, which outscored Tommy Biffle, Wagoner, by more than 5 pounds.

The 50-year-old VanDam will place an unprecedented 25th Bassmaster trophy on his mantle — a feat many believe may never be broken.

This isn’t his first victory on the famous Oklahoma lake. He won an Elite Series event on Grand Lake back in 2007 with 78-2.

The bass VanDam was targeting this time were primarily in the pre-spawn phase and were positioned along transition zones where one type of bottom met another.

“The male bass were all in shallow along the bank and pretty easy to catch,” VanDam said. “I knew that to win, I needed to catch the larger females that were staging farther offshore — around 8 to 10 feet of water.”

After an unproductive practice, the four-time Bassmaster Classic champion said he was forced to adapt and experiment on Thursday’s opening round of competition.

“I really didn’t think I could win this thing after the tough practice I had,” he said. “But I knew I had to cover water to find active fish. The female bass that were moving in to spawn were not yet on beds, but they would still hit a reaction bait like a crankbait or a spinnerbait.”

VanDam said he fished at least 50 spots per day early in the tournament, but dialed in to the best locations during Saturday and Sunday, which meant less traveling from one to the next.

“Today was a tougher bite for me. I caught fewer fish, but I was focusing on the locations that were producing the largest bass. It proved to be the right decision,” he said.

He caught some bass this week on a 1/2-ounce green pumpkin Strike King Structure Jig paired with a green pumpkin Rage Menace Grub with the tail dipped in chartreuse dye.

For the rod-and-reel combo, he used a 7-foot, 4-inch Quantum Tour KVD rod matched with a Quantum Smoke S3 baitcaster in a 7.3:1 gear ratio. The reel was spooled with 20-pound Bass Pro Shops XPS fluorocarbon line.

“My most productive bait was a Strike King KVD 1.5 squarebill crankbait in a brown craw color,” he said. “I pulled that on a 7-foot Quantum Tour KVD medium-action crankbait rod paired with a Quantum Smoke 200 reel in a 5.3:1 gear ratio. I tied the crankbait on to 12-pound Bass Pros Shops XPS fluorocarbon.”

A huge factor for the seven-time Toyota Bassmaster Angler of the Year was the hooks he used on the squarebill crankbait.

“I swapped the factory hooks with No. 2 Mustad KVD treble hooks, and that increased my hook-up rate tremendously,” he said. “I heard multiple anglers comment on how the bass were swatting at their lures and not staying hooked up. My hook change was critical to getting all my fish into the boat.”

When asked if retirement was in his near future, VanDam laughed.

“These tournaments are very difficult to win, and I’ve been very blessed over my career, but I’ll never take any of it for granted. I still get very emotional, just like winning my first B.A.S.S. tournament in 1991.”

VanDam’s victory at Grand Lake will push his winnings to more than $6.3 million across 306 tournaments over an impressive 29-year career, and he has no ambitions of stopping.

Hawk, a rookie on the Elite Series this year, was awarded $1,000 for the leading the Toyota Bassmaster Angler of the Year points race at the end of the event. He also claimed the Power-Pole Captain’s Cash Award of $1,000 for being the highest-placing angler who is registered and eligible and uses a client-approved product on his boat. And he collected the Toyota Bonus Bucks Award of $3,000 for being the highest-placing eligible entrant in the program.

Bill Weidler of Helena, Ala., received $1,500 dollars as the winner of the Phoenix Boats Big Bass award. He had the largest bass of the tournament with a 7-3 largemouth he caught in the first round of competition Thursday.