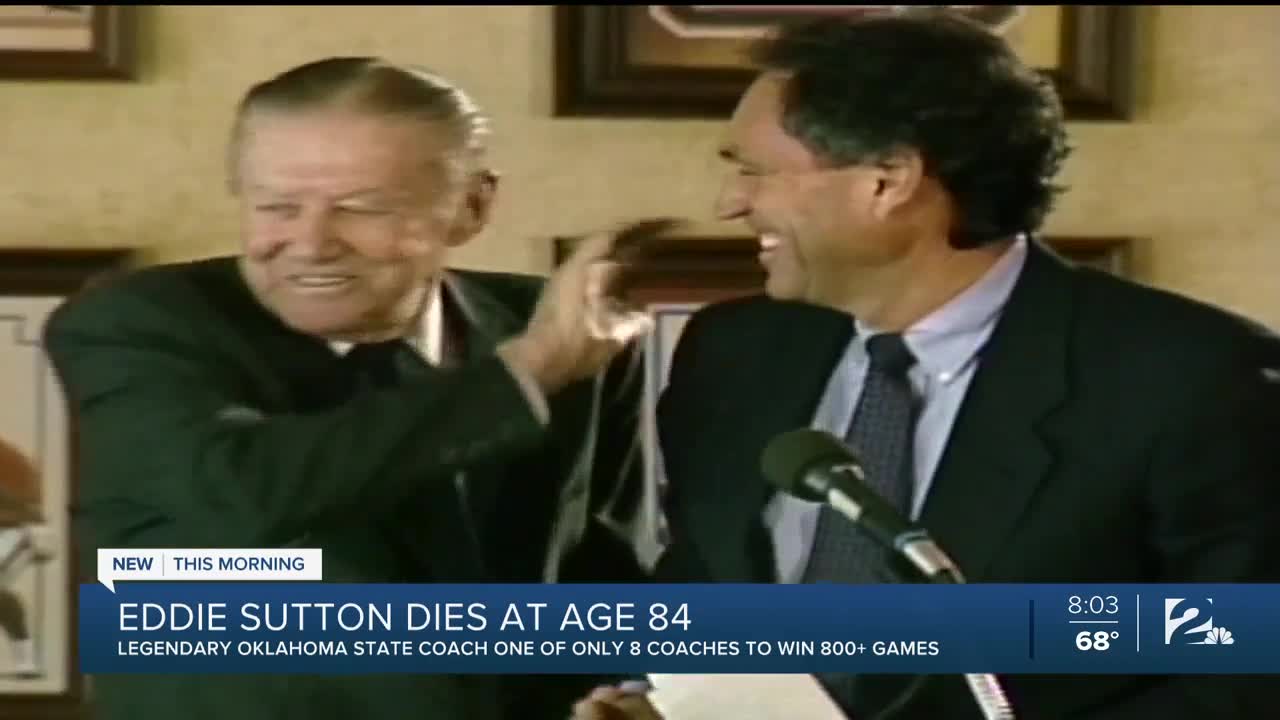 A friend of the family confirmed the news to KJRH Saturday night.

Sutton, who had been in hospice care, died Saturday in Tulsa.

Our beloved Dad and Papa Coach Eddie Sutton, age 84, passed away peacefully of natural causes the evening of May 23rd at his home in South Tulsa. He was surrounded by his three sons and their families, which include his nine adoring grandchildren. He is reunited with hie number one assistant, his bride Patsy Sutton, who passed away in January 2013 after 54 years of marriage.

Dad and Mom treated their players like family and always shared the belief that his teachings went beyond the basketball court. He cherished the time he spent at every school and appreciated the support from their loyal fans. He believed they deserved so much credit in the success of his programs.

He felt his recent Hall of Fame induction in April, was an honor and tribute to the great players he coached and outstanding assistant coaches that worked for him.

We are grateful for all the thoughts and prayers, and appreciate the continued respect for our privacy. A memorial service for the public will be planned at the appropriate time.

Sutton became the first coach to take four teams to the NCAA Tournament (Creighton, Arkansas, Kentucky and Oklahoma State) and reached the Final Four in 1978 with Arkansas and in 1995 and 2004 with OSU.

Sutton was elected to the Naismith Basketball Hall of Fame last month, in his seventh time as a finalist.

He was born in Bucklin, Kansas and played for legendary coach Henry Iba in the 1950’s. Sutton’s coaching career started at Tulsa Central High School and he is a member of the TPS Sports Hall of Fame.

Sutton’s College coaching career began at the College of Southern Idaho. He would then spend five seasons at Creighton, taking the Bluejays to the NCAA Tournament in 1974.

Sutton then spent 11 seasons at the University of Arkansas, winning 260 games and taking the Razorbacks to the Final Four in 1978.

He accepted the head coaching position at Kentucky in 1985, and won 32 games and took the Wildcats to the Elite Eight in his first season, but resigned four years later after the program faced NCAA sanctions for numerous violations, including paying players.

Sutton returned to his alma mater, Oklahoma State in 1990 and immediately took the program to heights it hadn’t seen since Iba’s heyday.