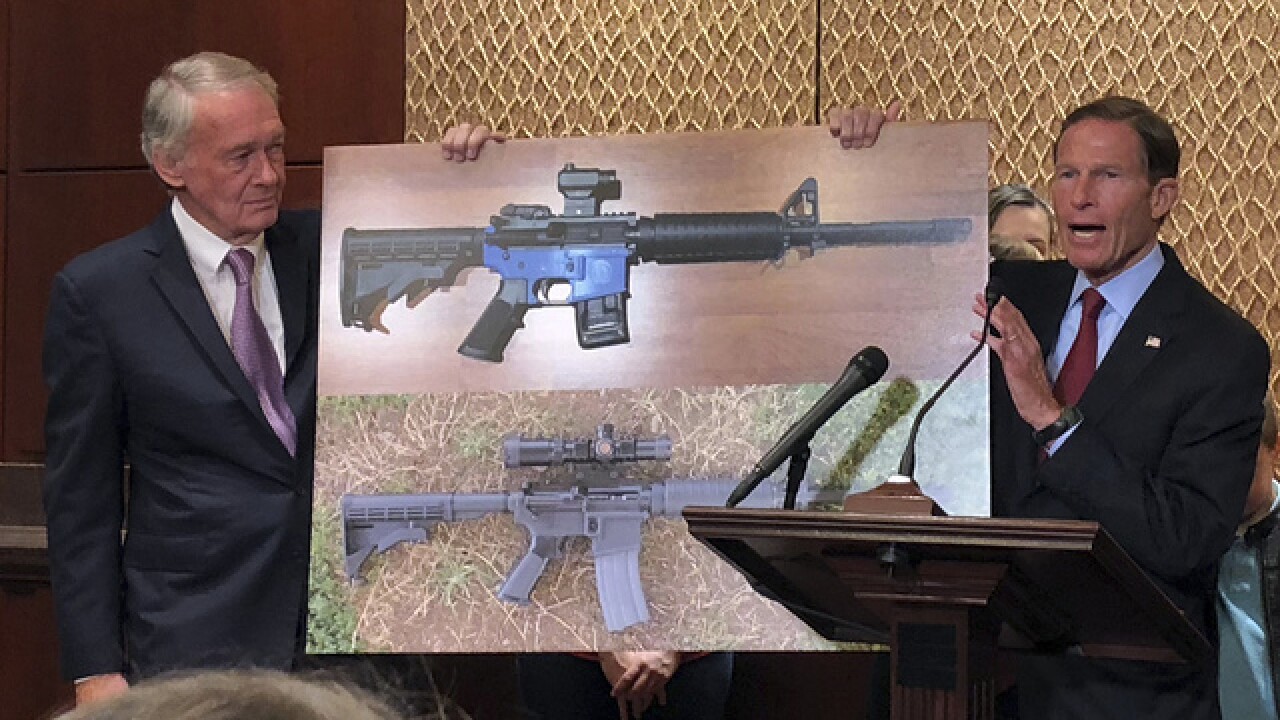 Copyright 2018 Scripps Media, Inc. All rights reserved. This material may not be published, broadcast, rewritten, or redistributed.
Matthew Daly
<p>Sen. Edward Markey, D-Mass., left, and Sen. Richard Blumenthal, D-Ct., display a photo of a plastic gun on Tuesday, July 31, 2018, on Capitol Hill in Washington. Democrats are calling on President Donald Trump to reverse an administration decision to allow a Texas company to make blueprints for a 3D-printed gun available online. (AP Photo/Matthew Daly)</p>

SEATTLE (AP) -- The Latest on President Donald Trump and downloadable blueprints for a 3D-printed gun (all times local):

A federal judge in Seattle has issued a temporary restraining order to stop the release of blueprints to make untraceable and undetectable 3D-printed plastic guns.

Eight Democratic attorneys general filed a lawsuit Monday seeking to block the federal government's settlement with the company that makes the plans available online. They also sought a restraining order, arguing the 3D guns would be a safety risk.

The company behind the plans, Austin, Texas-based Defense Distributed, had reached a settlement with the federal government in June that allows it to make the plans for the guns available for download on Wednesday.

The restraining order puts that plan on hold for now.

In the meantime, Congressional Democrats have urged President Trump to reverse the decision to let Defense Distributed publish the plans. Trump said Tuesday that he's "looking into" the idea, saying making 3D plastic guns available to the public "doesn't seem to make much sense!"

The White House is declining to say whether the president thinks blueprints for printing plastic guns should be available to the public.

Spokesman Hogan Gidley tells reporters aboard Air Force One that President Donald Trump "is committed to the safety and security of all Americans and considers this his highest responsibility."

Gidley notes that it's currently illegal to own or make a wholly plastic gun, including any made with a 3D printer, and says the administration supports that law and "will continue to look at all options available to us to do what is necessary to protect Americans while also supporting the First and Second amendments."

Trump had tweeted earlier that he was looking into the issue, adding, "Already spoke to NRA, doesn't seem to make much sense!"

Democrats are calling on President Donald Trump to reverse an administration decision to allow a Texas company to make blueprints for a 3D-printed gun available online.

Democratic senators said at a news conference that Trump has the power to stop the company from making downloadable plans available online. A settlement reached this summer takes effect Wednesday.

Massachusetts Sen. Edward Markey said: "Donald Trump will be totally responsible for every downloadable, plastic AR-15 (gun) that will be roaming the streets of our country if he does not act today" to stop it.

Connecticut Sen. Richard Blumenthal said if Trump fails to act, "blood is going to be on his hands."

President Donald Trump says he is consulting with the National Rifle Association over whether it makes sense for a Texas company to publish downloadable blueprints for a 3D-printed gun.

Trump tweeted Tuesday he is "looking into 3-D Plastic Guns being sold to the public," adding that he "already spoke to NRA."

The president expressed doubt, saying "doesn't seem to make much sense!" He did not offer further details.

Trump spoke after eight states filed suit against the administration, contending the hard-to-trace plastic weapons are a boon to terrorists and criminals and threaten public safety.

The suit, filed Monday in Seattle, asks a judge to block the federal government's late-June settlement with Defense Distributed, which allowed the company to make the plans available online.